Forsberg at home in her Norway garden. Photo by Kilian Jornet. 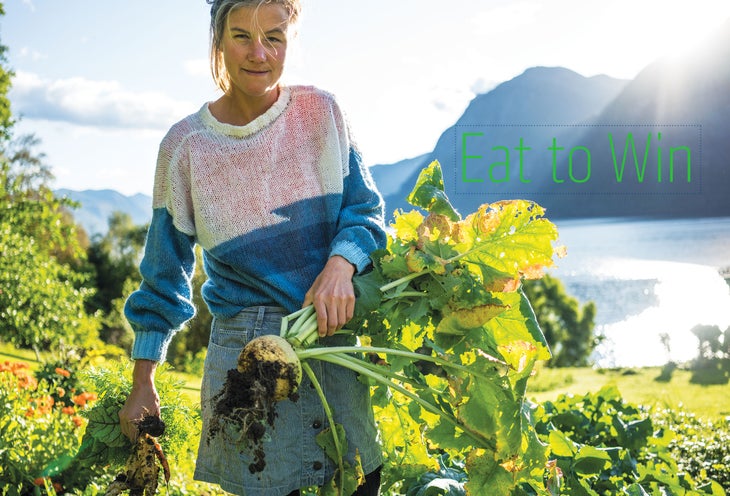 Winning mountain, ultra and trail runner Emelie Forsberg approaches every race with grit, grace and a smile. Considering her race results, including wins at The Rut 50K, Kendall Mountain Run, Transvulcania, Mount Marathon Race, Hamperokken Skyrace and Matterhorn Ultra to name a few, as well as setting impressive FKTs, including her recent on the Kungsleden Trail in Sweden, the approach seems to be working.

Forsberg is a creature of the seasons. Her sports are clearly delineated, with skiing her sport of choice during the winter months and running as a go-to from spring into the autumn.

A hobbyist farmer, her cooking and eating habits are governed by the available daylight hours as well. She gravitates toward salads, fresh soups and lighter breads in the spring, while in the darker and colder months she craves potatoes (last year she grew enough to last for the year) and her homemade bean-and-lentil burgers.

Forsberg, 31, was born in Sweden, and now makes her home in Romsdalen, Norway, on a farm named Moonvalley. While there is plenty of fresh air, water and daylight, at least in the summer months, Forsberg’s farm is close to the Arctic Circle, meaning conditions can be harsh. Hearty crops like kale, beets, rutabagas, carrots, potatoes and rhubarb tend to do the best.

Forsberg is a vegetarian. Her life partner, perhaps the world’s top all-around trail runner, Kilian Jornet, 30, who is Spanish by birth, and also lives in Norway, has never eaten much meat, according to Forsberg. In fact, his mom is a vegetarian. He leans toward being a pescatarian, making him and Forsberg prime examples of the athletic achievement that can come with vegetable-based eating.

While there have been times in her life that Forsberg ate meat, eggs and honey, she has been vegetarian for several years and even experimented with a vegan diet while recovering from a skiing injury in 2016. She now mostly avoids eggs, honey and milk, although she still enjoys cheese.

A Look At Daily Nutrition

Breakfast is very simple, usually a smoothie, porridge or bread. Last winter, we had the whole freezer full of berries, so we could, almost every morning, make a smoothie from the berries we picked ourselves. And we always have homemade bread, maybe one lighter, softer, sourdough bread and one that’s more dark and heavy with a lot of fiber and grains inside.
After that, it’s my first training session. For long racing and training sessions (10 hours or more), I love to eat sandwiches or my own bars. For shorter workouts, I’ll take my own bars, chocolate and other snacks.
When I get home, I’ll do a little computer work and have lunch. Often lunch is leftovers from yesterday’s dinner and I just cook it fast.
Depending on the season, I’ll work outside a bit and rest before doing my second training session. The second session is often shorter than the first one. I like to get most of my work done in the morning so I have the afternoons free for other things, like cooking. I often bake or make batches of things like beetroot soup, curries or lentil and bean burgers, a favorite meal, for dinner or lunch the next day. I also like to finish dinner with something sweet, like chocolate cake or a cinnamon bun.
Even as an athlete, you don’t need meat or eggs to get enough protein. If you know how to cook and bake with lentils and beans you get all the protein you need. I started being a vegetarian when I was 14, but my mother made me cook my own food since the rest of my family wasn’t vegetarian, so my nutrition wasn’t great. By the time I was 16 or 17, I started to learn more about nutrition, and my diet improved. 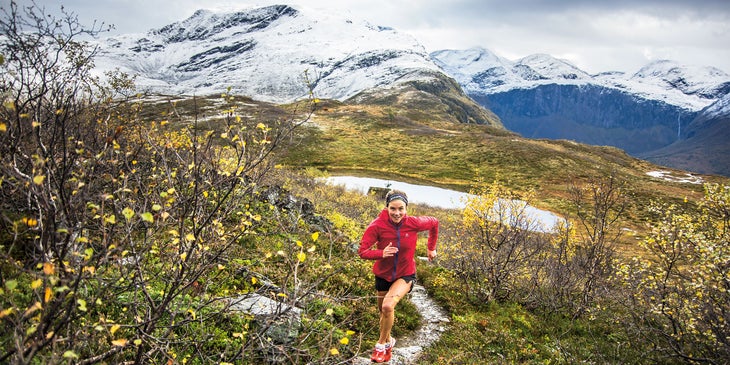 You can eat them anytime, in summer with a light salad and roasted or grilled root vegetables, or in autumn or winter with tasty mashed potatoes or root vegetables, with lots of butter or oil, and salt.Makes approx. 12 big burgers

Mix everything in a blender or food processor. Form the batter into burgers; fry in olive oil.

Balance Is the Key

The Swede is known for her keen sense of balance, not just while navigating rocky trails and imposing, mountainous terrain, but also in her approach to life. She credits much of this to her upbringing spending time in nature, working on her grandparents’ farm, foraging and moving for the joy of it. Forsberg is a professional athlete that listens to her body, addressing small niggles before they become something more and not racing if she isn’t feeling it.

“For some, the focus is the race. For me, the focus is running long in the mountains,” says Forsberg, who’s never had an overuse injury. “I don’t want to lose my passion for running.”

Forsberg sees it as her job to be the best version of an athlete she can. Life balance becomes essential to maintain her running stoke while also allowing her body to recover. She eats what her body craves, be it roasted vegetables, delicious pastries and homemade bread (she worked as a baker during college) or chocolate; she rests when she needs it, does yoga (she’s a certified instructor), practices focused breathing and cultivates interests outside of sport, like farming, cooking and writing.

Even with an intuitive approach, food and fueling is essential to performance for any athlete, especially for one setting FKTs on mountains like Mont Blanc and Grand Teton, and dominating the Skyrunning circuit. So what does Emelie Forsberg eat in a day? We spent an afternoon cooking with her to find out. See “A Look at Daily Nutrition.”

Yes, the woman who races with a flower in her hair has a pet peeve.
“I think it’s just so annoying to hear people say, ‘Cooking takes too much time,’” says Forsberg. “It doesn’t need to take time. Two days ago, I had friends over and we made a homemade pizza for lunch. It only took 20 minutes, and that’s more time than a lot of things you can make. A crudité, just chopping vegetables, doesn’t take much time at all. If you don’t have the passion for it, then I can see someone thinking it takes time. But, if you have an interest in it, if you are willing to learn about different foods and how to prepare and store them, if you learn to have routines, it all becomes easy.”