Imagine a world where there are no puffy post-run bagels. Or what if you were suddenly banned from your favorite cereal … 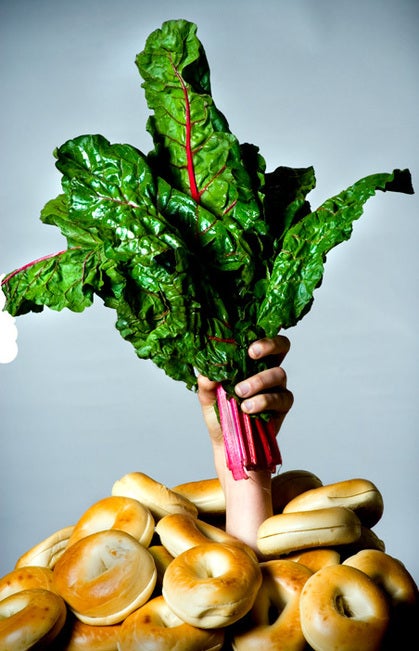 Imagine a world where there are no puffy post-run bagels. Or what if you were suddenly banned from your favorite cereal (the one that always gets you through that hilly run)? Runners with celiac disease face such scenarios. Celiac disease is a lifelong autoimmune intestinal disorder estimated to affect nearly one in 132 individuals in the United States. Gluten, a protein found in grains like wheat, rye and barley, acts as a poison to celiacs, damaging the hair-like projections called villi that line the small intestine. Eventually, the intestines stop absorbing basic nutrients.

If left untreated, the condition can damage the small bowel and lead to an increased risk of certain long-term conditions and autoimmune disorders like anemia, osteoporosis and thyroid disease.

Since eliminating gluten from the diet is the only way to combat celiac disease, it is a huge challenge for trail runners whose diets consists largely of cereals, bagels, energy bars, pastas and other grain-based foods. What’s a runner to do?

How will I know?

The cause of celiac disease is unknown, although, according to the Celiac Disease Foundation, it may be linked to a group of genes on Chromosome 6. Some experts believe that stressful events such as surgery, severe emotional stress or childbirth may trigger symptoms for the first time.

“CD is a multi-system, multi-symptom disorder. Symptoms are extremely varied and can often mimic other bowel disorders,” says the Celiac Disease Foundation. Common misdiagnoses range from IBS (irritable bowel syndrome) and chronic fatigue syndrome, to fibromyalgia and lymphoma. That’s why it’s crucial to get a professional diagnosis.

Diagnosing the disease often begins with a line of antibody blood tests. If these come back positive, the next step is likely an intestinal biopsy, the gold standard for diagnosis.

It’s important to note the difference between having celiac disease and being gluten intolerant. While both conditions may illicit similar symptoms when gluten is eaten, they typically subside in those with a gluten intolerance and don’t cause permanent intestinal damage.

For celiacs, the only effective, proven treatment for healing the gut and promoting regrowth of intestinal villi is to completely remove gluten from the diet. The time it takes to fully recover varies, depending on how long the intestinal damage has been occurring. Those with a gluten intolerance should also follow the same course of action. It’s crucial to rid the diet entirely of foods or food ingredients made from grains, including wheat (all types), bran, rye, barley, bulgur, kamut, spelt, wheat germ and semolina.

Oats have been a hot topic among gluten-free forums and health reports as to whether they’re safe for celiacs. There’s a concern that oats may be contaminated by other gluten-containing grains during the growing and packaging processes. “Some consider oats safe for all but the most sensitive celiacs,” states Jax Peters Lowell, author of the Gluten-Free Bible. “Others feel that because of the difficulty of measuring the varying degrees in sensitivity between celiacs, it’s hard to know how many oats a celiac can consume without damaging the villi.” Further complicating matters is the fact that gluten can be “hidden” in many unlikely foods such as jelly beans, deli meats, soups, salad dressings and soy sauce. It can even be buried in the ingredients of some toiletries and pharmaceuticals. Celiacs must learn how to read labels and identify the hidden culprits.

For gluten-free runners, the big question becomes, “What can I eat?” Gluten-free flours made from rice, soy, corn or potatoes are all gut-friendly choices. Fresh meats, fish and poultry (not breaded or marinated), fruits, vegetables, rice, potatoes and most dairy products are also safe.

If a gluten-free diet seems spartan without favorite desserts or treats, think again. Health food stores like Vitamin Cottage and Whole Foods have long stocked their shelves with gluten-free cookies, crackers and other foods. Now, chains like King Soopers have also jumped on the bandwagon, and some restaurants such as P.F. Chang’s China Bistro have added gluten-free menu options.

In January 2007, the FDA published a proposed rule to establish a definition for the term “gluten free,” so consumers could easily identify safe foods in grocery stores.

An entire diet and lifestyle overhaul can be overwhelming, so consider enlisting a certified nutritionist who can develop an eating plan tailored to your needs. A nutritionist can take the guesswork out of what to eat, and significantly cut down on the trial-and-error recovery phase.

Dr. Caroline Smith of SportSense Company, based in Highlands Ranch, Colorado, specializes in working with individuals by blending food and fitness. “It’s all about choices. You get to decide how you want to feel and perform,” says Dr. Smith. She helps clients make food choices based on their activity levels, genetics, blood type, body type and metabolic profile, and recommends that a celiac’s nutrition plan is custom-tailored to include the right ratio of fats, carbs and proteins at each meal.

Smith even provides clients wheat and gluten-free sports-nutrition options like gels and shakes that can be ordered by contacting her through her company’s website (www.metabolismmagic.com). Kella DeLaRosa, a past client of Smith’s, noticed a remarkable change in her performance on the trail shortly after eliminating gluten and following her nutrition advice. “After about three days, my mental fog and sluggishness lifted, and I began to experience a more sustained energy level, even during long runs.”

What to expect when you’re detoxing

The old adage, “It’s going to get worse before it gets better,” often applies to those starting off on a gluten-elimination diet. Like many detox processes, it can cause irritability, mood swings and erratic energy levels. Trail runs may become harder, or you may not even have the energy to muster a run.

And it’s common for gluten to cause a heightened reaction if it’s taken out of the diet and then accidentally (or not) ingested during the elimination phase. Says Dr. Smith, “Over time, the healthier the body gets, the more stable it becomes. Then, if you eat something bad, you’ll feel the effects much quicker.” The bottom line here is to resist the temptation to cheat.

Mentally and emotionally, changes can occur during this phase as well. It’s not uncommon for an individual to go through stages of grief, ranging from denial to anger to depression. There are a plethora of support groups for celiacs; check the Celiac Disease Foundation website (www.celiac.org) for a list of chapters across the United States.

Not a celiac or gluten-intolerant runner? You can still reap the benefits of a gluten-free diet on the trail—especially during longer-distance runs.

:: Helps prevent a hypoglycemic “bonk” at the start of a run (typically within the first 30 minutes).

:: Teaches your body to draw energy from its fat stores rather than rely on the food in your stomach.

:: Reduces the amount of muscle glycogen you use on a run, which can help improve endurance.

:: Choose foods that have a high-protein and low-glycemic load (and are naturally gluten-free).

::  Focus this type of nutrition on your pre-run meals to maximize your gains while running.

WHAT TO EAT PRE-RUN?

:: Breads and pastas made with chickpea- or legume-based flour

It’s tough for runners, but those weaning themselves from gluten must allow their bodies a rest period to completely restore their health.

Take it easy. For many runners, the natural response to a lag in energy or a sub-par performance is to kick it up a notch, but extra exertion can lead to maxing out the adrenals when your body is already taxed.

Cut out the bad stuff. Consider avoiding or at least cutting back on alcohol, caffeine and sugar, since these substances only stimulate your body to work harder.

Get the gunk out. The lymph system is the body’s mechanism for clearing toxins from its cells, and lymphatic massage is a great way to aid the detox process.

Walk. In addition to helping the transition back to running, walking encourages movement of the lymphatic system.

Take it to heart. With a heart-rate monitor, you can objectively gauge your exertion level, which is often different than your perceived exertion.

Pay attention. Take this recovery period to be mindful of physical, mental and emotional changes. Keeping a log or journal can be extremely helpful in conveying critical information to a doctor or nutritional counselor.

Amy Fisher is a freelance writer and trail runner in Evergreen, Colorado. She adopted a gluten-free diet while training for the Pikes Peak Marathon.