Is running the perfect activity for weight loss and control? 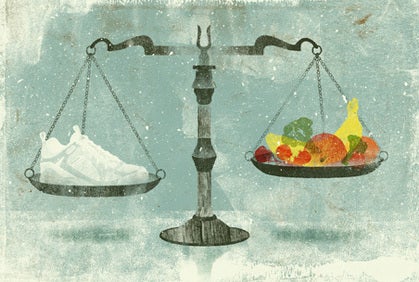 In a recent Australian survey, 58 percent of runners listed weight control as their fourth primary reason for running. Indeed, common opinion is that running is a powerful tool for losing weight. And, after looking at the almost skeletal elite ultrarunners and marathoners, you would think that running encourages leanness.

For world-class trail runner and marathoner, Uli Steidl, who now resides in Seattle, running has always been a way to stay lean. “Back in 1992, during basic training in the German military, I was not able to run much and gained about eight pounds in 12 weeks. Once I resumed my normal running routine, I lost the weight in about the same amount of time,” says Steidl.

But what is the evidence that distance running results in weight loss? Is it the panacea that will help you shed those excess pounds, and just how much running does it take to lose weight? Or are there better ways for trail runners to lose and maintain their weight?

First, let’s look at the physiological advantages of being a lean trail runner. The basic factor that determines our ability to run long and fast is our maximal oxygen uptake (aka VO2max), of which weight is a critical component. VO2max is measured by running on a treadmill in a lab to exhaustion while a measurement of our oxygen consumption at the end point is taken using a gas analyzer. Then, to measure our oxygen uptake relative to our individual body weight, this figure is converted to milliliters of oxygen and divided by our body weight, in kilograms. A good runner will have a VO2max over 65 mlsO2/kg, with elite distance runners and trail runners being over 70 mls/kg.

Although VO2max is to a large extent genetically determined, the lighter the runner, the higher the oxygen consumption per kilogram of body weight will be, and the faster the runner will be over ultra and trail runs. Being overweight also means that you have to expend extra calories to pull your body over the same distance, and the extra fat makes it harder for us to lose heat during our ultras.

Thus we are penalized for carrying extra weight, and when starting out the best thing the beginning trail runner can do is to lose weight to improve his or her VO2max. Fortunately, by doing lots of long-distance running, you can improve your VO2max significantly—between 15 and 25 percent in the first eight to 16 weeks, according to elite trail and ultrarunner Greg Crowther of Seattle, who has a Ph.D. in physiology and biophysics from the University of Washington. “The percentage improvement can change a lot, even as much as 50 percent over several years,” says Crowther.

Crowther, who has raced 26 ultras ranging from 50 kilometers to 100 miles, finishing 24 and winning 11, says, “I improved my time at the White River 50 by about four minutes from 2009 to 2010, partly because I was about four pounds lighter. Extra weight is also an issue for up- and downhill running, when the quadriceps are under extra stress from the eccentric contractions. Anything that you can do to minimize this stress, including weighing no more than necessary, should help reduce muscle damage.”

Running Versus Other Aerobic Activities

Next, let us compare running with the other major aerobic activities in the calorie-burning sweepstakes. See the accompanying sidebar for a ranking of the most common aerobic sports in descending order of calorie burn (biggest burners at the top).

Running is the heaviest calorie burner, ranking over cross-country skiing, lap swimming, rowing and cycling. Trail running would rank in the top three categories, because of the constantly changing terrain and the extra calories being burned by the stabilizer muscles that enable us to negotiate trails’ twists and turns.

This is all encouraging, but take a look at the fine print in the final column and you will see that burning large amounts of calories requires long and intense workout levels. For example, you would have to run roughly 8 mph (7.5-minute miles) for one hour to burn 1100 calories—somewhat discouraging when you consider that a 1000-calorie burger can be eaten in 10 minutes!

Also, these paces and distances are beyond the range of the beginning or overweight runner. The high-intensity requirement makes it almost impossible for recreational runners to employ a running program for effective weight loss, and overweight people are at an even greater disadvantage because they are more likely to experience muscle soreness and injury than normal weight people, because of their excess weight. While overweight people tend to lose weight faster than normal weight people, especially in the early stages of exercise, they are simply not able to maintain the energy demands of training fast every day, and will inevitably end up exhausted, sick or injured.

“Besides burning calories, running helps control my weight in that if I’m training for a particular race, I’m motivated to eat sensibly, for example, by including more vegetables. If there’s no racing goal on my horizon, I tend to eat more junk food and put on weight,” says Crowther.

Because of the disappointingly modest number of calories burned during one running session at a moderate pace, we must therefore run consistently enough to cause an overall calorie deficit—several days a week.

For this reason, most researchers consider aerobic exercise a weak method for accelerating weight loss. A one-year study at Stanford University (King et al 1991) found that 350 men and women, who did three to five exercise sessions lasting 30 to 40 minutes each, had no significant weight loss (although their aerobic fitness improved from five to eight percent).

So to burn substantial numbers of calories for weight loss we need to run at least one hour per day, six or seven days per week, at a fast clip; if you ask prototypical thin distance runners about their training, you will find they run close to this amount and pace. A caveat here: beware of overeating because you are hungry from your running program—this will negate the effects of the calories you have burned while running.

Running in the So-Called “Fat-Burning Zone”

What about the fat-burning-zone theory—i.e. work out long and slow to burn fat calories—that is so popular these days? This theory posits that when we run at a nice slow pace for a long time we tend to burn fat as our primary fuel source.

While running at low intensity does tend to draw more from fatty acids than from carbohydrates, the reality is that whether we burn fats from long, slow running or glycogen from shorter, high-intensity sessions, when it comes to losing weight, our body ultimately only cares about how many calories we have burned in a workout, not what fuel we burned.

Some research shows we may be better off exercising at a higher intensity for a shorter period of time, rather than exercising at a lower intensity for a longer period of time, because we will burn more calories in that scenario. Vigorous exercise also has another health benefit, according to some studies—it tends to preferentially draw fat from the abdominal area once glycogen stores start to deplete.

What about the theory that our resting metabolism is revved up after running and that we burn as many calories after we run as we do during the training effort? Well-researched studies show that the “post-running calorie burn” is minimal.

Here is an example: Jogging at 12-minutes per mile for 30 minutes causes resting metabolic rate to stay elevated for 20 to 30 minutes, and only burns 12 additional calories post-run. When running intensity is increased to 75 percent of aerobic capacity for 35 to 45 minutes, we burn an extra 15 to 30 calories. Hardly earth-shaking figures when you consider that we need to burn 3500 calories to lose one pound of fat.

What about really long runs? Studies on extended running for 80 minutes or longer also found a very modest after-running calorie burn. Weighing these not-so-impressive after-run burns against the calories in one Hershey’s kiss (25 calories) is a great reality check.

Study after study has found that simply reducing caloric intake significantly reduces weight. A study by Donnelly and cohorts (2009) found that people who lost weight by dieting alone lost as much weight (45 pounds) as groups who supplemented their dieting with aerobic exercise, weight training or both.

While running is a poor performer at weight loss, it does confer marvelous health benefits. It improves our cardiorespiratory endurance (aka VO2max), improves our blood lipid profile (decreases triglycerides, decreases total cholesterol, decreases our risk for hypertension, obesity, cancer, heart disease and diabetes) and finally, not to be underestimated, offers a dramatic improvement in our psychological state of well being, providing us with decreased anxiety and depression.

How effective is running for maintaining our weight once we have achieved our ideal weight? Consistent exercise, including running, is among the top predictors for success in weight control and maintenance, along with healthy eating habits and measuring your weight frequently.

Roy Stevenson is an exercise physiologist who has taught exercise science and sports nutrition at universities in the Puget Sound. He has published over 250 articles on running, triathlon training, fitness and nutrition.