Summer is delicious. It’s also when we run the most. There’s no reason it can’t be both. 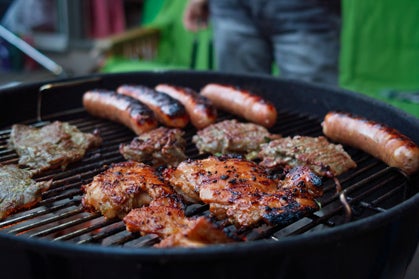 Red meat is a great source of iron, so there’s no reason to swear off steak during summer grill season. Photo by Flickr user Jun Seita/Creative Commons 2.0.

It’s summer, the season of barbecues and outdoor drinking. But it’s also the season for racing, and taking advantage of the awesome weather to hit the trails more than ever.

How do you enjoy the delicious treats the (arguably) best time of year has to offer, without sabotaging your hard-earned fitness? We asked our friend Lindsey Tucker, a registered and licensed dietitian in Minneapolis, Minnesota, for her advice.

“Simply put, no food is going to make or break your health or performance,” says Tucker, noting that nutritional needs and response vary greatly based on individual lifestyle, fitness and genetics. However, she adds, “A few foods may help or hinder your summer training.”

What to reach for

It’s entirely possible to enjoy all the fresh flavors and off-the-grill deliciousness of summer while making top marks for nutrition. Here are a few foods you can enjoy guilt-free.

Smoothies. “Many runners will find running in the heat and humidity significantly decreases appetite, which can lead to suboptimal intake when training during the summer months,” says Tucker. “Sipping a smoothie provides a simple, cool, easy-to-digest way to take in some nutrients following a hot run.”

She says a good smoothie should have at least three ingredients: a base (such as milk or yogurt with ice), a fruit or vegetable, and a source of fat. “For example, milk, fruit and peanut butter, or yogurt, berries and avocado,” she says.

Beef. Runners’ iron needs go up right about the time grilling season starts. That’s because we often run more in the summer months, and the pounding forces of running break down red blood cells, making us prone to anemia if we consume insufficient iron.

Great news, carnivores: While there are many sources of iron, Tucker says, beef is one of the best. “Our bodies absorb a greater percentage of iron from animal-based sources–meat, poultry, fish–with beef containing one of the highest concentrations of iron per serving,” she says. “So fire up that grill and enjoy a bioavailable source of iron.”

Fresh produce. Summer is the best time of year for lovers of fresh fruits and vegetables, most of which come into season in the warmer months. In addition to being a great way to rehydrate, fresh produce almost always contains antioxidants, which combat inflammation and free radicals. These can impact the way you feel and perform during training and races, Tucker says.

She also urges variety. “In addition to tasting amazing, fruits and vegetables have different nutritional profiles,” she says. “If you eat fresh strawberries you are going to get a different set of nutrients than if you eat a few slices of watermelon.”

Coconut water. It’s not news to the casual observer that you lose sodium chloride when you sweat. But salt is plentiful in many dietary sources; the same isn’t true for that sometimes overlooked electrolyte, potassium.

“Coconut water is a concentrated source of potassium and can be beneficial to drink prior to or following a [run],” Tucker says. “Grab a coconut water and eat some salty barbecue food and most of your bases will be covered.”

What to watch out for

Alcohol and caffeine. In general, alcohol and caffeine should be consumed in moderation, whether or not you’re a runner. But they can be especially dangerous in the summer because of their diuretic properties, which can lead to dehydration.

That might seem like a no-brainer, but when every Wednesday-night group run winds up at a brewery and every Sunday barbecue is replete with beer, summer can make it difficult to moderate consumption. And I think I speak for every other coffee drinker out there when I say that you can pry the espresso from my cold dead hands before I’ll attempt to run without it, regardless of the season.

Fine, says Tucker–as long as you adequately compensate by hydrating even more.

“Caffeine can be an appetite suppressant and is a mild diuretic [so it] can mask your thirst while inadequately hydrating your body,” she says. “I often recommend my clients start by drinking a cup of water prior to every cup of coffee consumed.”

Same goes for alcohol, she continues. “Make sure you are adequately hydrated before you head to the brewery with friends after a run or to the beer tent following race,” she says. “Your body is going to be in need of hydration, and reaching for a beer or glass of wine when you are thirsty usually won’t end well.”

More on summer nutrition for runners: