Before you chug down another sports drink, learn the not-so-sweet truth about sugar

Are you high? If you’re like most U.S. citizens the answer is likely yes. According to conservative USDA estimates, … 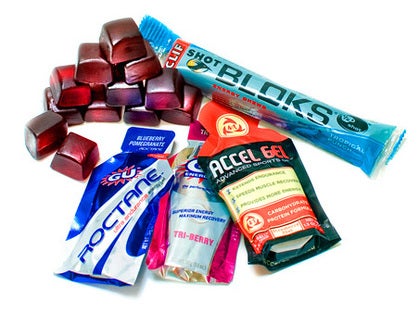 Are you high? If you’re like most U.S. citizens the answer is likely yes. According to conservative USDA estimates, on average, Americans consume 22 teaspoons of “added sugars” each day, or 355 additional calories, more than double what is recommended by the American Heart Association. Sweetener consumption has jumped by 19 percent since 1970 to a hefty 140 pounds a year for every man, women and child. And the gel-sports-drink-energy-bar-loving trail runner is far from exempt in the sugar onslaught.

Research shows that wolfing down sugar-laden foods or drinks with a high glycemic index (GI), like white bread, ice cream or high-sugar energy-bars about an hour before a run may cause you to tire more quickly. A rapid spike in blood sugar before exercise can force your pancreas to pump out large amounts of insulin, which results in a sudden, performance-zapping drop in blood sugar during exercise.

Case in point: Researchers in a recent issue of the Journal of Science and Medicine in Sport found that cyclists rode significantly faster 45 minutes after eating a low GI pre-race meal than a high GI one. The low GI meal led to an increase in the availability of carbohydrates and a greater carbohydrate oxidation throughout the time trial, which likely helped sustain increased energy production.

However, a raft of research papers shows that sugar-spiked foods can help you train harder and longer on the trail. Why? One word: Glycogen. Glycogen is sugar in storage form. It is your body’s most important and efficient source of energy during high-intensity exercise.

“Once muscle glycogen levels sink too low, fatigue sets in and you start to feel like you’re running through Jello-O,” says Tara Gidus, RD, owner of Tara Gidus Nutrition Consulting in Orlando, Florida. “During long bouts of exercise, eating rapidly-digested sugars such as those found in gels or sports drinks can help preserve stored muscle glycogen and keep you working harder for longer.”

If running for more than 60 minutes, Gidus suggests consuming 30 to 60 grams of simple carbohydrates for each hour of activity. If exercising for an hour or less, water is all you need.

Immediately post-run you are also free to consume sugar, guilt-free. At this time, muscles are craving sugar to replenish glycogen stores to prepare you for your next trail session. Don’t go overboard, but if you’re going to drink pop or eat a jumbo muffin with your java anyway, this is the time. As for the rest of the day? Shelf sugary foods. Pre-run breakfast the next day? Gidus recommends whole-grain cereal with milk, plain yogurt or an apple with peanut butter as lower-GI options.

There is a reason we keep coming back to sugar-spiked frappuccinos: We’ve got a sweet “food addiction.” Studies suggest that sugar activates the brain’s neural pathways in a manner similar to taking narcotic drugs. “Sugar can stimulate the release of feel-good opioids and dopamine in the brain and have addictive potential,” says Nicole M. Avena, Ph.D., Assistant Professor in the Department of Psychiatry at the University of Florida, in Gainesville. “Just as morphine addicts need extra hits in order to feel an effect, you begin to need more sugar to feel satisfied.”

The more you satisfy these cravings, the more likely it is that you’ll be trying to run off a Buddha-belly as your sugar calorie intake sneaks upwards. “Sugar doesn’t provide satiety like other nutrients, which can lead to overeating,” says Gidus. So it’s easy to stuff yourself silly on chocolate cake. A bowl of chickpeas? Not so much.

The ill effects don’t stop at worsening your buff-to-blubber ratio. Jacob Teitelbaum, MD, author of Beat Sugar Addiction Now!, says overeating sweeteners forces your pancreas to work overtime cranking out insulin to clear glucose from the blood. “Eventually, this can lead to insulin resistance, where it takes a lot more insulin to get the same effect, paving the way for Type 2 diabetes.”

Further, a recent study published in the Journal of the American Medical Association showed that increased intake of sugar-sweetened foods can lower levels of HDL (good) cholesterol while simultaneously raising blood triglyceride levels, both risk factors for heart disease.

In particular, the dietary thug appears to be the fructose in added sweeteners such as high-fructose corn syrup. Consuming reasonable amounts of fructose in items such a fruits is OK, the problem arises when we eat too much of the stuff in sugar-spiked foods. “It appears that excess fructose can stimulate fat production in the liver raising the risk of developing high cholesterol, hypertension, diabetes and a spare tire around your belly,” says Teitelbaum.