A trail runner’s guide to phytonutrients 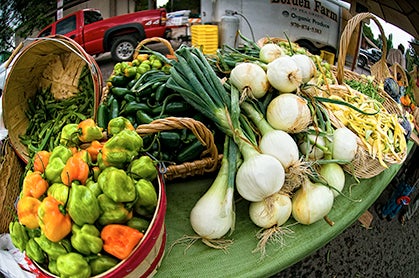 This article originally appeared in our June 2010 issue. Want more? Subscribe to Trail Runner for just $2.75 an issue.

A farmer’s market is probably the last place you’d expect to find performance-enhancing compounds, but if the fruits and vegetables sold there were packaged the way sports supplements are, a pineapple wrapper might say, “Helps heal sore muscles during strenuous training,” and an apple’s tag could declare, “Boosts the immune system after long runs.”

Fruits, vegetables, spices and herbs contain compounds called phytonutrients that protect the plant from pests and diseases. Recent scientific studies indicate that these magic molecules may also boost your trail running. “Phytonutrients can be even more potent than vitamins and minerals in supplements,” says Bob Seebohar, Olympic sport dietician and author of Nutrition Periodization for Endurance Athletes: Taking Traditional Sports Nutrition to the Next Level.

For starters, phytonutrients can lessen the symptoms of delayed-onset muscle soreness. “Like ice on a sprained ankle, phytonutrients knock down the inflammation in overused muscles,” explains David C. Nieman, a professor of health promotion at Appalachian State University. “The less inflammation, the less muscle damage,” and the quicker a runner can return to the trails pain-free.

If cranking on a lot of downhills makes your quads say “ow” the next day, add a little spice to your life. Turmeric, the bright-yellow Indian spice, contains a potent anti-inflammatory compound called curcumin. A recent animal study at the University of South Carolina found that a daily dose of curcumin significantly decreases muscle damage and accelerates recovery after extended downhill running.

“Since curcumin has no adverse side effects, it’s safe to take everyday,” says Bharat B. Aggarwal, a Professor of Experimental Therapeutics at the University of Texas.

In the Kitchen: Add turmeric to stir-fries, spice rubs and marinades. Or sprinkle it on top of popcorn, peanuts and salads.

Runners-Up: Other anti-inflammatory spices include ginger, garlic and black pepper.

Extra-virgin olive oil is the only oil to contain the phytonutrient oleocanthal, which has been shown in the lab to inhibit the enzymes COX-1 and COX-2. These enzymes, the primary targets of ibuprofen, are largely responsible for inflammation in sore muscles and achy joints.

Although each tablespoon of extra-virgin olive oil is reported to equal approximately three percent of an ibuprofen tablet, dozens of other phytonutrients in olive oil combine with its monounsaturated fatty acids to “sweep out damaging inflammation while also protecting runners’ hearts,” says Bonci.

In the Kitchen: High heat damages the delicate phytonutrients in olive oil, so rather than use it for frying, use it in salads and dressings. Always buy extra-virgin olive oils, which have the most oleocanthal and other anti-inflammatory phytonutrients, compounds that give the oil a slight peppery flavor.

The dull, achy pain that creeps up a few days after a tough run is partially due to swelling in injured muscle fibers. Bromelain, a mixture of phytonutrient enzymes in pineapples, has been used for decades to reduce swelling and is a natural alternative to ibuprofen for alleviating symptoms of delayed-onset muscle soreness.

A 2004 study published in the Journal of Sports Science found that taking phytonutrient enzymes, including bromelain, for one day before and three days after a grueling downhill run substantially reduced pain and tenderness in stressed quadriceps muscles.

In the Kitchen: Add fresh or frozen pineapple to yogurt, smoothies, salads and stir fries. Or drizzle pineapple chunks with olive oil and grill until golden brown.

You may usually reach for oranges and vitamin C to stave off a cold or flu, but next time pick a fresh apple. Apples are loaded with quercetin, a phytonutrient shown to have anti-viral activity. In a 2007 study, Dr. David Nieman and his colleagues gave cyclists quercetin supplements for three weeks and then put the athletes through a strenuous endurance test. Compared to placebo, quercetin reduced the post-exercise illness rate by 40 percent.

In the Kitchen: Drop that peeler! Quercetin is found primarily in apple skins. Apple sauce and apple juice have little quercetin because they usually loose their skins during processing.

Polyphenols in Green and Black Tea

“Together, quercetin and other antioxidants in black and green tea called polyphenols have a strong anti-inflammatory effect in athletes,” says Dr. Nieman. Recent research at Rutgers University found that 1.76 grams per day of black-tea extract for at least a week prior and two days after intense interval training significantly lessened post-exercise muscle soreness.

In the Kitchen: Use tea instead of water to add flavor to cooked rice and other grains, or add dry tea leaves to salads, marinades and spice rubs. On the trail, fill your hydration pack with tea, or make “sun tea” by adding two or three tea bags to a 20-ounce water bottle and let it steep for a couple of hours in sunlight.

Cooking for the Long Run:

Loaded with bromelain and quercetin, this version of sangria will help soothe tired muscles after a long Saturday run.

1 apple, cut into half-
inch chunks

Add ingredients to a large pitcher. Mix well and chill in the refrigerator. Serves 4 to 6.

Packed with anti-inflammatory spices, this meat rub up is the perfect accessory for your favorite post-run protein.

Mix all ingredients together except the olive oil. Coat chicken, pork or fish with olive oil, and then rub spice mixture on both sides of meat. Grill or pan-fry. Makes enough spices for four boneless chicken breasts.