The best food upgrades money can buy, from bison to quinoa 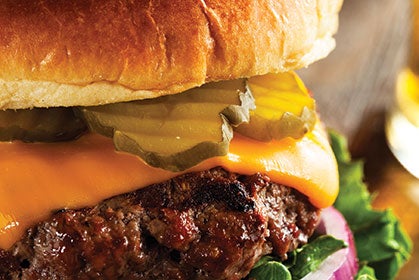 Whether it’s a jump from economy to first class or a switch from a worn-out pair of trail runners to the latest pillowy-soft option, an upgrade can be a beautiful thing. And when it comes to the joys of upgrading, athletes shouldn’t overlook their food options.

Sure, staples like salmon and rice can play an important role in a diet geared toward building trail-worthy endurance, but dig a little deeper into your wallet and treat yourself to their more upscale counterparts and the nutritional variety can pay off in spades. Not to mention that trying new foods is a perfect way to break out of a food rut.

So the next time your running mates ask you what’s for dinner, give them a smug look and say, “Bison steak with a side of sprouted quinoa.” Splurging never tasted so good—or was so good for you.

With increasing concern over the environmental impacts of feedlot-raised cattle and the resulting nutritionally degraded beef, now is the time to hoof it over to a forward-thinking butcher for a red-meat alternative. A recent study published in the journal Nutrition Research found that consuming bison, sometimes called buffalo, results in less of a rise in blood triglycerides, inflammation and other heart-disease risk factors than a diet of beef. Differences in rearing methods such as pasture raising, which can bring about an improved nutrient profile, may explain these results. As a red meat, bison provides runners with much-needed iron, which helps transport oxygen from the lungs to working muscles. Look for various cuts of bison or try ground bison in your pasta sauce, chili and burgers.

Now that this South American grain has become a regular fixture in the pantries of runners and everyone can finally pronounce it correctly, some companies are kicking things up a notch and offering sprouted quinoa. These quinoa grains have begun but not finished germinating, so essentially you have the beginnings of a new plant along with the nutrient firepower needed to help it grow. The outcome is quinoa that might be more nutritionally dense in magnesium and iron as well as being easier to digest.

Another benefit: Cooking time can be slashed by up to 35 percent because quinoa’s tough shell is softened during sprouting. Look for sprouted quinoa, and other sprouted grains like rice, in health-food stores, or load up at truroots.com.

For the health of our oceans, it has never been more important to cast your line for sustainable options from the fishmonger. Swimming in the icy waters of the North Pacific, pearly white Alaskan sablefish (also called black cod) is considered a green-light fish by environmental groups owing to its well-managed fishery.

As with salmon, the buttery flesh of sablefish is loaded with mega-healthy omega-3 fats. Beyond their role in keeping your ticker beating strong, higher intakes of inflammation-quelling omega-3s can reduce exercise-induced muscle soreness, so you can get back on the trail quicker. It’s not always easy to find fresh sablefish, so look for frozen cuts of good quality. Sablefish can be grilled, steamed, broiled, poached, baked or seared in a skillet.

It might be time to embrace another milky way. Each cold glass of goat milk is not only a good source of protein and vitamin D, both of which are vital for active bodies, but also provides a higher dose of omega-3 fats as well as the bone-building mineral trio of calcium, magnesium and phosphorus than cow’s milk, according to a watershed study published in the Journal of Food Composition and Analysis in 2009. Some people also find that tangy goat milk is easier to digest. To control your saturated-fat intake, look for goat milk with two percent or less fat.

Want to add a wallop of sweet-tart citrusy flavor to your oatmeal, yogurt, trail mix or homemade energy bars? Well, look no further than parched goldenberries. Native to South America, fresh goldenberries are sun-dried to produce a chewy dried fruit that helps you load up on vitamin A, which bolsters eye, immune, bone and skin health. Preliminary research suggests goldenberries are also a source of anolides, chemical compounds suspected to have anti-cancer powers. Look for them in well-stocked natural-food stores or find bags of dried goldenberries at navitasnaturals.com.

It’s time to go nuts for this Paleo-worthy flour, made by grinding up hazelnuts into a fine powder with a toothsome rich, toasty flavor. Compared to regular flour, the hazelnut version delivers higher amounts of heart-healthy monounsaturated fat, muscle-friendly protein, dietary fiber and vitamin E, an antioxidant that has been linked to better brain functioning and bone health.

Try hazelnut flour to replace about 30 percent of the flour called for in pancake, waffle, muffin and other recipes. You can also use it in bread and pizza-crust recipes to add nutty nuances, or as a coating for chicken and fish. Look for packages of Bob’s Red Mill hazelnut flour or even try grinding your own using a spice or coffee grinder or high-powered blender.

Try incorporating two of these “upgrades” in this recipe for Sablefish with Pineapple Salsa and Quinoa:

Bring quinoa and broth to a boil in a medium-sized saucepan. Reduce heat and simmer while covered until quinoa is tender. Drain excess liquid, let rest five minutes, then fluff with a fork.

Place sablefish on a baking sheet and season with salt and pepper. Pre-heat oven broiler with rack set about five inches from heat. Broil fish for eight minutes, or until opaque in center.

Serve sablefish topped with salsa and with quinoa on the side. Serves four.