If you feel fatigued and sluggish, nutritional imbalance could be to blame 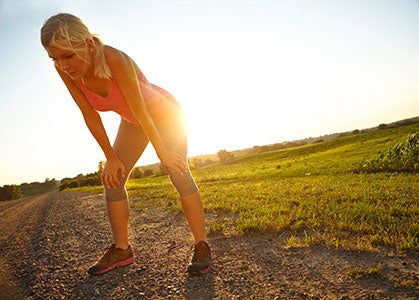 On August 23, a beaming Caroline Boller won the Santa Rosa Marathon in 2 hours 45 minutes. At the same race, just two years ago, she had bombed her marathon debut.

The 40-year-old attorney and mother from Temecula, California, finished the 2013 Santa Rosa Marathon in 3:53, nearly a half hour off her goal—which, given her training times, should have been in sub-3:30 territory.

It wasn’t just inexperience. Boller entered the race having made a combination of seemingly healthy changes that backfired. She ramped up her running volume from 40 to 55 miles a week to over 70, stopped eating all meat except fish and restricted calories to shed the last of pregnancy-related weight gain.

The result? She suffered from iron deficiency and felt the debilitating effects on her training.

“As a busy working mother, it was easy to dismiss feeling exhausted all the time, and a lack of motivation and cruddy runs, as being some version of ‘normal,’ ” she recalls. “But it wasn’t normal. I’d be out running and look at my watch expecting to see a certain pace, and be shocked to see it over a minute per mile slower. My usual easy-run pace felt closer to the effort of a tempo run. I crawled into bed as early as possible but still never felt I got enough sleep.”

When she realized she lacked iron and began taking an iron supplement, she returned to running strong within three or four weeks. “My runs were positively exuberant,” she says. “It was such a stark contrast.”

Boller’s example is a vivid reminder that endurance athletes in general, and women in particular, are at risk for iron deficiency—especially those who are going vegetarian, eliminating grains or gluten (cutting out iron-rich breads and cereals) or reducing calories to slim down.

It’s a problem that an athlete can overlook and blame on overtraining. And the easy solution—eat more iron—can get complicated if it interferes with the runner’s dietary preferences, or if it prompts the athlete to take supplements that can trigger other problems (more on this below).

I became interested in iron deficiency earlier this summer, when I returned to California after a month of hiking and running in Colorado, expecting to feel extra power during my sea-level runs thanks to the high-altitude training. Instead, my legs burned on moderate uphills while I gasped for breath. At the track, I ran an 800-meter interval and looked in dismay at the 3:30 on my watch, since my effort felt as though I should have run my normal time of 3:10.

Was I overtraining? Nah, it couldn’t be—I had plenty of rest days, and my training volume was moderate. I had had higher weekly mileage in the past without feeling so worn out. Sleep? Nope, I slept plenty in the summer.

Then it hit me: The problem stemmed from what I was eating. Or rather, not eating.

Having given up beef and moved toward vegetarianism in recent years, mainly for environmental reasons, I cut poultry and fish out of my diet while staying in Colorado with my vegan brother. I also stopped eating breakfast cereal and most bread in an effort to lose weight and to experiment with breakfast alternatives. Without meat and iron-fortified cereal or bread, I lost two steady sources of iron.

Iron is essential to create molecules of hemoglobin, the protein in red blood cells, which transport oxygen in the blood. If you aren’t consuming enough iron, you might not produce enough hemoglobin. You can also drain your iron through heavy menstruation (which is why women are more at risk), or through chronic gastrointestinal bleeding from ulcers or excessive use of over-the-counter pain relievers. As a result, muscles can’t get as much oxygen as they need, so you’ll feel fatigued and have a compromised aerobic capacity.

But even short of full-blown anemia, low iron stores can compromise athletic performance, since iron plays an important role in metabolism, as well as oxygen transportation.

To make things more complicated, you can get “pseudoanemia” if your hemoglobin levels are normal, but the concentration of red blood cells relative to overall blood volume—a ratio called “hematocrit”—drops. A low hematocrit can arise in beginner athletes who embark on a rigorous exercise regimen, or experienced athletes who are adapting to an increase in their training load, because the body tries to produce more blood in response to hard exercise.

Pseudoanemia, a normal adaptive response to exercise, does not require treatment or dietary changes. But in the short term, it may contribute to feelings of weakness, especially when combined with already-low hemoglobin levels.

According to my sports doctor, I suffered from a combination of iron deficiency and pseudoanemia. I wasn’t getting enough iron from nutrition, and I made matters worse by pumping up my blood volume while training in Colorado’s high altitude and racing a challenging 12-mile trail race, the Kendall Mountain Run.

Putting high demands on my body in the thin air above 10,000 feet jacked up the body’s need to transport oxygen to muscles. My body responded by trying to produce more plasma and red blood cells. But the production and concentration of hemoglobin couldn’t catch up until I adapted to the training conditions and also started consuming more iron.

I began eating dark-meat poultry, leafy greens and Cheerios with a vengeance, and I also increased Vitamin C (an iron-absorption booster) and used cast-iron cookware as frequently as possible. I felt noticeably better in two to three weeks, and my pace and breathing on higher-intensity runs became more normal.

A blood test last week revealed that my iron stores, hemoglobin and hematocrit are on the low end of normal ranges, with a below-normal level of MCHC, or “mean corpuscular hemoglobin concentration,” which is the average amount of hemoglobin per red blood cell. My doctor says my iron-rich diet during the past month helped me bounce back, but I need to keep it up and get my blood re-checked in a month.

How to Get Your Iron

Eating a variety of food, including meat, is the best defense against iron deficiency, because iron from meat sources (called “heme” iron) is much easier to absorb. The body absorbs about 25 percent of the iron in beef, poultry and fish, but only a small fraction (about 3 to 15 percent) of the iron from grains, vegetables and supplements.

“Almost every athlete who comes to me with iron-deficiency anemia is a vegan or vegetarian,” says Matt Fitzgerald, an endurance coach, sports nutritionist and author of several books, including Racing Weight. “It’s possible to be a vegan/vegetarian athlete and not develop iron deficiency, but you’re making it harder on yourself.”

For non-meat iron sources, he and other dietitians recommend beans, legumes such as lentils, dark leafy greens and whole grains such as teff (an iron-rich grain from Ethiopia), quinoa and millet. Cooking in cast-iron cookware is believed to provide a moderate but hard-to-quantify benefit.

Also, Fitzgerald adds, you don’t have to shun the cereal aisle. “Breakfast cereal has taken so much abuse, but there’s nothing wrong with cereals that have a low sugar content and are 100 percent whole grain. … Whole grains should be a part of every endurance athlete’s diet unless there’s some special reason not to eat them.”

The significant iron content of some cereal can be dampened by the calcium in milk and the caffeine in a morning cup of coffee, which inhibit iron absorption. If you have breakfast cereal, it’s best to serve it with berries or OJ to get the Vitamin C that enhances iron absorption.

Shoud You Take an Iron Supplement?

Iron supplements can cause constipation and other forms of gastrointestinal distress. More seriously, some people have a genetic disorder called hereditary hemochromatosis, which leads to “iron overload”—an over-absorption and accumulation of iron in vital organs, which can cause other serious health problems. (This disorder mostly affects people of Northern European origin.) If you’re at risk, you definitely need to avoid iron supplements.

For most athletes, “it’s probably not harmful to take a low-dose supplement, but it’s better to be individually diagnosed and put on a regimen” by getting a blood test and working with a doctor, says Lori Nedescu, a registered dietician and competitive marathoner and cyclist who advises athletes on nutrition. “If you take a supplement because you think you’re deficient, but you don’t get better, then you need to look at the root of the problem and treat that.”

Nedescu became anemic several years ago after her hemoglobin level dropped well below normal. She gave up being vegetarian and ate meat for several months, but her body did not respond to the increase in dietary iron. Her doctor discovered she has celiac disease, an intestinal disorder that affects the gut’s ability to absorb nutrients, including iron.

Nedescu therefore gets intravenous iron supplements, a treatment option for people with intestinal disorders such as celiac disease or inflammatory-bowel disease.

The difference the iron made to her training, she says, was “night and day”—from feeling so tired while training that she would want to stop and take a nap, to being able to win the First Day of Winter 50K in Ohio last year in a time of 4:27.

Sarah Lavender Smith is a contributing editor at Trail Runner and a certified running coach who lives and runs in the San Francisco Bay Area.

Is Athletic Greens Worth It? A Nutrition Expert’s Review