Are organic foods really better for you? 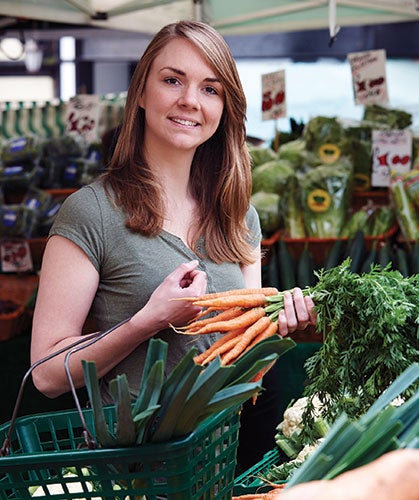 It was all going so well for us whole-food-eating athletes in the past few years. Local, organic foods had started to work their way into the mainstream and had become more readily available. According to the U.S.D.A.’s National Farmers Market Directory, there were 7,864 farmers markets listed in 2012, a 9.6-percent increase from 2011. It would be just a matter of time before the majority of foods were grown without pesticides, hormones or chemicals, right? More demand brings more markets, more markets bring more produce, and competition brings lower-priced organic fruits, veggies and meats for all of us.

Then some scientists at Stanford University decided to chime in. Their 2011 meta-analysis (a review of a group of research studies) concluded, “The published literature lacks strong evidence that organic foods are significantly more nutritious than conventional foods.” That was all it took for the media to run with the titles like, “Organic food no better than conventionally grown food.”

Ouch. Well this is simply not the whole story. A deeper look shows a few glaring issues with the Stanford study, and that there is still a compelling argument for purchasing organic foods.

The media attention this research garnered also brought with it a more critical eye. Dr. Kirsten Brandt, an agricultural scientist at Newcastle University in the U.K., was skeptical of the Stanford researchers’ conclusion that there was no difference in flavanols (naturally occurring antioxidants found in plants with anti-inflammatory, anti-carcinogenic and anti-viral properties) between organic and conventional foods, which seemed to contradict recent studies.

Dr. Brandt performed her own meta-analysis on the recent flavanol studies, and found a 12-percent increase “of secondary metabolites and vitamins in organically produced fruits and vegetables” when compared to conventionally grown. These secondary metabolites have been shown to reduce risk of cancer and cardiovascular disease.

The Stanford researchers also left out studies that showed the percentage of certain nutrients—including vitamin C, omega-3s, polyphenols, flavonoids and other phytonutrients—to be higher in organic foods than conventionally grown. A full nutrient spectrum simply wasn’t considered, even though there was sufficient data to incorporate in the studies.

Dr. Brandt says the Stanford researchers chose to “include [nutrients] where the difference was smallest to begin with” and omitted others “that were just as well-described in the papers they included.”

In response to the Stanford studies’ findings, the senior author of the study, Dena Bravata, M.D., M.S., said, “There isn’t much difference between organic and conventional foods, if you’re an adult and making a decision based solely on your health.”

What the meta-analysis did find was that conventionally grown produce had more pesticide residue; if you eat it, you are consuming potentially harmful toxins in unknown quantities. How can knowingly consuming pesticides, herbicides and fungicide toxicants be a good decision for your health? If eating organic foods can reduce exposure to pesticide residues and antibiotic-resistant bacteria—as the study demonstrated—isn’t that reason enough to go organic? Recently, the World Health Organization’s cancer agency declared the world’s most widely used weedkiller, Roundup, a “probable carcinogen.”

As Marion Nestle, a prominent food-politics author and professor in the Department of Nutrition, Food Studies and Public Health at New York University, put it in her New York Times piece on the topic, “Personally, I prefer not to be a guinea pig in a long-term pesticide experiment.”

What about the fruit flies?

Research published in the scientific journal PLoS ONE compels a further look at the overall health benefits of organic vs. conventionally grown foods.

Fruit flies share about 75 percent of the genes that cause disease in humans. In the 2012 study “Organically Grown Food Provides Health Benefits to Drosophila Melanogaster,” fruit flies thrived on organically grown foods when compared to the conventional versions. They lived longer, and were more fertile and more resistant to stress.

The research concluded, “The difference in outcomes among the flies fed different diets could be due to the effects of pesticide and fungicide residue from conventionally raised foods. Or it could be that the organic-fed flies thrived because of a higher level of nutrients in the organic produce.”

Although not a controlled double-blind human study, it raises some compelling questions.

Regardless of the nutritional value or what was or wasn’t included in the meta-analysis, there are a few ancillary problems with conventional agriculture that should be noted. We know the chemicals we use to grow food conventionally increase health risks in farm workers, most notably cancer. The E.P.A. reports 10,000 to 20,000 of these workers are diagnosed with pesticide poisoning each year.

There is also the matter of treatment chemicals seeping into the ground, running off into our rivers and streams and leaving the soil behind barren for future crops. A 2012 meta-analysis of 109 papers by the University of Oxford found that organic farms pollute less, have better soil and house more living, organic species.

Put your money where your mouth is

Organically grown foods are an investment in your health, but if you cannot afford organic 100 percent of the time, here’s a guide to the most and least harmful conventional foods.

Which foods are important to buy organic?

Foods that lack an outer shell or hard peel are often the most affected by chemicals or pesticides. These foods include:

Foods well protected or generally less treated with chemicals include:

Matt Hart is a contributing editor for Trail Runner. This article originally appeared in our June 2015 issue.