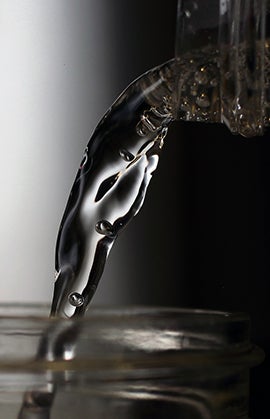 Since I am living in Europe, I have been drinking a lot of sparkling water. I once heard that carbonated drinks leach calcium from the bones. Is that true?

Sparkling water, also called seltzer water or carbonated water, is plain water with added carbon dioxide. The result is effervescence that some deem more palatable than plain water. Research on carbonated water and bone health is very limited, as most studies on bone density have concerned carbonated soda, not carbonated water. Research suggests that certain ingredients in soda, particularly dark-colored ones like Pepsi and Coke, may reduce bone mineral density, which can increase the risk of fractures or osteoporosis.

Phosphoric acid is an additive in most sodas, used as a preservative and to enhance flavor. Too much phosphorus and too little calcium in your diet can lead to bone loss, because calcium is needed to neutralize excess acidity in the blood that occurs during the breakdown of phosphoric acid. Caffeine, also present in many sodas, may interfere with calcium absorption through urinary losses.

A 2006 study published by the American Journal of Clinical Nutrition looked at the effects of sugared, caffeinated and diet sodas on bone mineral density and found that women who drank a diet or regular cola at least three times a week over five years had significantly lower bone densities than those who drank cola once a month or less.

Carbonated water does not contain any added sugars, phosphoric acid or caffeine, and, to date, no studies point to any harmful effects of its carbonation on bone health. It hydrates just as effectively as regular tap water and may even have some unexpected health benefits—particularly for runners with fickle stomachs.

A 2002 study published in the European Journal of Gastroenterology and Hepatology found that carbonated water helped relieve indigestion and constipation. And, in 2004, a study in the Journal of Nutrition found that carbonated water containing sodium may help lower cholesterol and reduce the risk of cardiovascular problems in postmenopausal women.

Editor’s Note: This is an installment in our online Ask the Dietitian column with Maria Dalzot, MS, RD, CDN and an avid trail runner. You can visit her blog at www.mariadalzotrd.com and submit your nutrition questions to nutrition@trailrunnermag.com