Ask the Dietitian: Will the compound, found in beets, leafy greens and supplements, make me a better runner? 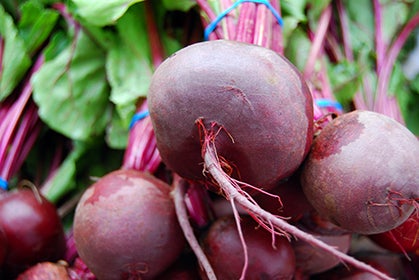 I know beets are the newest craze because they raise nitrate levels in your blood. How does this make one a better runner?

The humble beet has taken center stage in the sports-nutrition scene as the hottest new ergogenic, or exercise-performance, aid.

The beet’s claim to fame stems from its high nitrate concentration. When nitrate is consumed through the diet, it is reduced to nitrite (with an “i”) by bacteria that reside on the surface of the tongue. During times of reduced oxygen availability (think short, fast sprints), nitrite is then converted to nitric oxide (NO), which enters the circulation.

Studies have shown that this increase in circulating NO can aid in exercise performance by delaying the onset of fatigue, increasing pain tolerance and reducing the oxygen cost of intense exercise by increasing muscle efficiency.

According to a 2014 review in Sports Medicine, as of now, the exercise duration to which nitrate has an ergogenic effect is in the range of five to 30 minutes. There is limited evidence of improvements in exercise performance over longer durations. This may be related to intensity: longer, slower runs have lower oxygen requirements than do short sprint intervals.

The Sports Medicine review also concludes that the daily nitrate dosage shown to have favorable effects on exercise performance can be easily consumed through a normal, balanced diet. Nitrate-supplementation research is still in its infancy, and there is currently no evidence that additional nitrate supplementation produces greater performance benefits.

It is important to note that the safety of nitrate supplementation has yet to be determined. Therefore, athletes wishing to experiment with the possible ergogenic properties of nitrate supplementation are advised to rely on a diet full of fruits and vegetables. Beets and beetroot juice are not the only nitrate-rich food sources; green leafy vegetables like spinach and arugula, celery and watercress are all nitrate-rich alternatives. It is not known if consuming large quantities of high-nitrate vegetables can cause negative side effects in the long term, but it is highly unlikely.

While longer-term studies further explore nitrate’s ergogenic effects, you can rely on hard work, dedication and the occasional beet salad to get you to the finish line faster.

Ask The RDN: Should I Eat Within 30 Minutes Of Running?