Want a little protein and fat to help fuel your next long run? These single-serving squeeze packs of calorie-dense seed and nut butters are perfect for the trail. 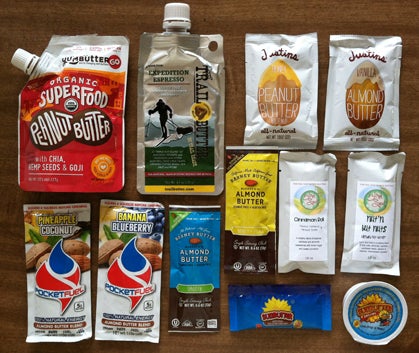 Once upon a time, the nut-butter world was a desolate one, indeed, with only one real decision to be made: crunchy or creamy?

Today, those who are “nuts about nuts” have far more options to consider—not just peanut butter, but almond butter, sunflower-seed butter, cashew butter, hazelnut butter and blends of all of the above. Not just plain, but flavors galore, with mix-in ingredients ranging from dried fruit to chocolate chips to coconut oil. And, to the delight of many a trail runner, not just jars, but single-serving-size squeeze packs that stash easily in hydration packs.

Because nut butters have higher protein and fat content than most traditional runners’ fuel like carb-packed gels, they can be a great choice for long, slow jaunts in the woods, which generally utilize more fat for fuel than carbohydrates. Nut butters are typically less sweet, too, so can be a welcome change for taste buds that have tired of sugar midway through a big run.

We rounded up as many brands and varieties of nut and seed butters as we could and put them to the test, evaluating each based on taste, flavors available and what we like to call “nut-butter accessibility”—how easy it is to get the nut butter out of each packet vs. how much tends to get stuck in the bottom due to texture, oil separation or inefficient packaging.

A quick word on organic labeling:
Organic nuts are difficult to find and often cost-prohibitively expensive. Due to this, most companies resort to using non-organic (albeit generally domestically sourced) nuts, even while making an effort to use organic sweeteners and other ingredients. The one exception to this we found was YumButter (see page 4), a new nut-butter company out of Madison, Wisconsin, that manufactures a certifiably organic peanut-butter and sunflower-seed butter. (Their almond butter is made with non-organic almonds.)

Please tell us which seed or nut butters you have tried and enjoyed! 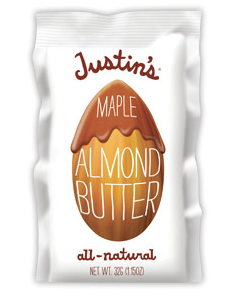 What It Is: Almond, peanut or hazelnut butters, blended with other ingredients. All nuts are domestically sourced.

Sweetened With: Organic cane sugar, sugar, honey or nothing at all, depending on the flavor.

The Verdict: One of the original squeezable packs of nut butter and developed specifically with athletes in mind, Justin’s is successful thanks to its simplicity. The flavors are classic and sweetened amply for that nice sweet-salty combination that tends to taste so darn good in the middle of a long run.

The squeeze packets are easy to open (though, for maximum nut-butter access, we recommend tearing them open all the way across the packet, not just along the suggested diagonal corner) and, thanks to the inclusion of palm oil, far less oil separation seems to happen than with other brands.

For best results, though, heed the “Before Opening: Knead and Squeeze” label. A good way to prepare to open a Justin’s Nut Butter packet is to hold it in your palm while running for a few minutes; this will warm it up, reduce oil separation and ensure the nut butter comes out more easily rather than getting stuck inside the wrapper.

Justin’s Nut Butter is perhaps the most widely distributed of the nut butters we tested, available in many mainstream grocery stores in addition to specialty-outdoor and running outlets. Our favorite flavors are “Maple Almond” and the Nutella-esque “Chocolate Hazelnut.” 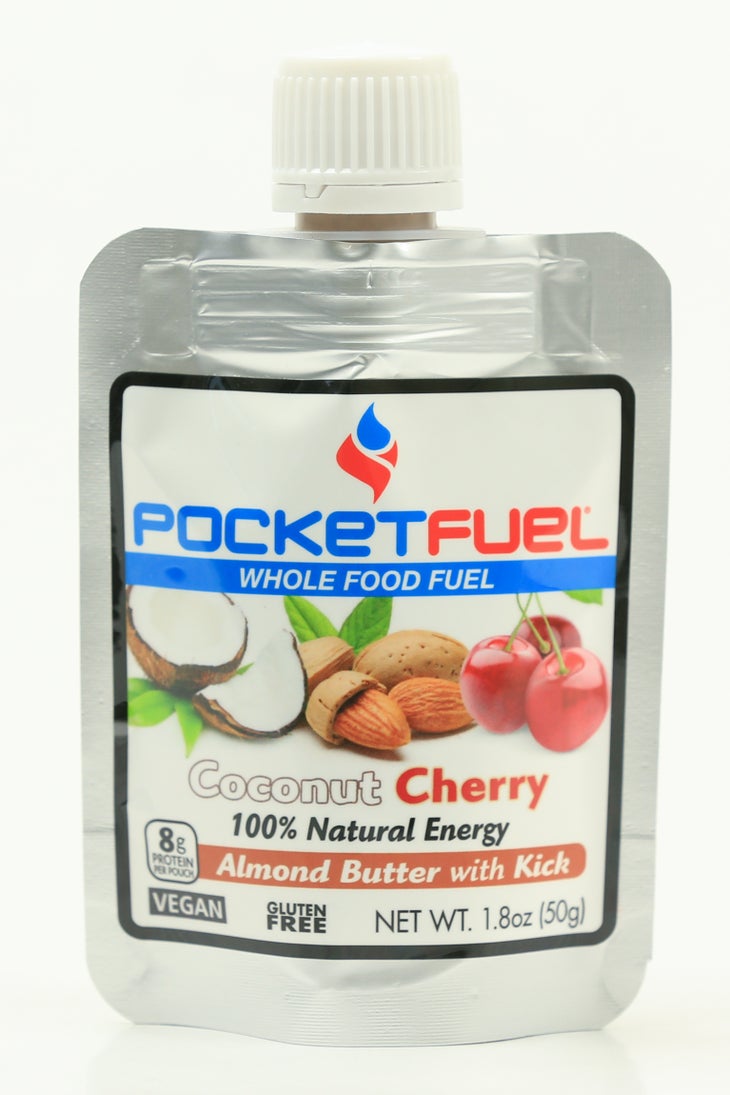 What It Is: Almond or hazelnut butters blended with other ingredients.

Sweetened With: Sugar, honey or organic evaporated cane juice, depending on the flavor.

The Verdict: With some of the tastiest and most inventive flavor combinations, PocketFuel is one of our favorite nut butters. Most flavors are certifiably vegan, too. (Unrelated, but good to know: PocketFuel also makes “Energy Shots,” similar-size packets of mocha-, java- or vanilla-flavored cold-brew coffee that pack 70mg of caffeine apiece—perfect for ultras!)

The packets are highly portable and easy to open. “Nut-butter accessibility” depends on flavor; the hazelnut butters, for example, tend to come out easily, while the Chia Goji & Honey flavor tends to get stuck in the bottom of the packet.

Carried by over 400 retailers in North America, it can primarily be found at REI and specialty-running/outdoor shops. Our favorite flavors are “Chocolate Haze Hazelnut Butter” and “Coconut Cherry Almond Butter.” 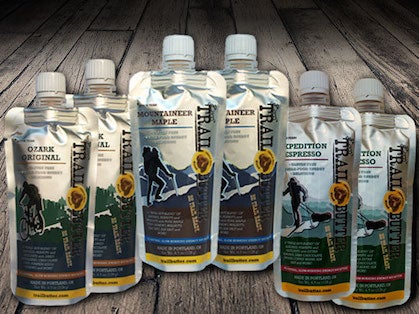 What It Is: A triple-nut blend of almonds, hazelnuts and peanuts, mixed with other ingredients.

Sweetened With: Clover honey and vanilla.

The Verdict: In our humble opinion, Trailbutter takes the cake as far as flavor goes. The nut blend is mouth-wateringly delicious, the kind of snack you’ll be tempted to reach for both on and off the trail. Chocolate lovers will no doubt rejoice, too, as both the Ozark Original and Expedition Espresso flavors boast a sweet hint of cocoa.

All flavors contain coconut oil, too, which may account for the higher fat content compared to other brands.

The resealable 4.5-oz packets are slightly bulky, but of course pack four times as many calories as the single-serving sizes other brands manufacture. So, they’re a good bet for long adventures—that is, if you don’t gobble it all down before your race or training run even gets started (we may speak from experience here).

Some Trailbutter tends to get stuck in the bottom of the packet, but a quick-tear tab (which nulls the resealable top) allows better access to the last few morsels. Trailbutter also sponsors a number of athletes—100-percent trail runners, in fact, ranging from Yassine Diboun to Joe Uhan to Trail Runner’s Ask the Dietitian columnist Maria Dalzot.

Trailbutter can primarily be found at specialty markets (including a few Whole Foods locations) and running/outdoor shops throughout the Pacific Northwest, as well as online. Our favorite flavor is the “Ozark Original,” which includes a plethora of delectable ingredients: coconut oil, dried cranberries, semisweet chocolate, pumpkin seeds, sunflower seeds, cashews, flaxseeds and more. 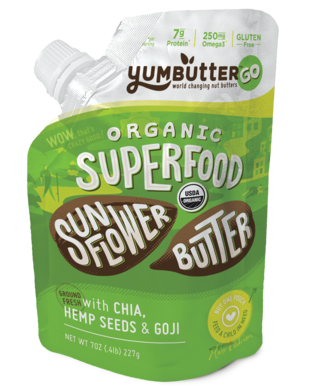 What It Is: Almond, organic peanut or organic sunflower seed butters blended with chia, hemp seeds and goji berries.

Squeeze-Pack Size: 7 oz (227g) with a resealable top
Per 2-Tbsp serving:
Calories – 180 calories
Total Fat – 14-15g
Saturated Fat – 1-2.5g
Sodium – 6-8mg
Total Carb – 8-10g
Fiber – 2-4g
Sugars – 3-4g
Protein – 6-7g
The Verdict:
These delicious, superfood-packed nut butters keep it simple with just three basic flavors to choose from in their squeeze-pack form. They tend to be a bit less sweet than other nut butters we tried, which can be a welcome change in the midst of a long run or race when you’re already “sugared out” on gels and other carb-packed sweets.

Clearly the bulkiest of the squeezable packs we tried (and packing a walloping 1,080 calories per pack), this one may not be especially practical for shorter runs. But, with its resealable packaging, it’s still a good choice for super-long runs or fastpacking, and perhaps someday will come in smaller packets, too.

In the meantime: one things that makes the Kickstarter-founded Yumbutter special is their BuyOne:FeedOne program, through which Yumbutter founders Matt and Adrian partner with a nonprofit in Guatemala to help feed children with malnutrition.

It’s available online and in several dozen states across the U.S., primarily in specialty markets, including a few Whole Foods locations. Our favorite flavor is the good ol’ Peanut Butter—not too sweet, just rich, smooth and flavorful. (Notably, Yumbutter’s peanut butter and sunflower butter were the only nut butters of those we tried that are 100-percent certified organic.) 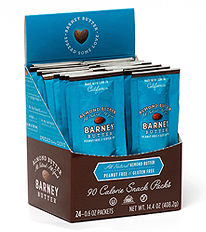 What It Is: Almond butter, available in four flavors, made in a peanut-free facility.

Sweetened With: Evaporated cane juice, honey, vegan chocolate or nothing at all, depending on flavor.

The Verdict: Ideal for those with peanut allergies (many other brands of almond butter are still manufactured in facilities that also produce peanut products), Barney Butter is also, with the exception of the honey + flax flavor, certifiably vegan and non-GMO.

We noticed a bit more oil separation with Barney Butter than other brands, as some almond butter inevitably gets stuck in the bottom of each packet—however, the relatively small size of the packets allows you to use your teeth to get at the final bits.

It’s available in a wide variety of mainstream grocery stores and specialty markets. Our favorite flavor is the “Cocoa + Coconut”—tasty as candy, and a rarity in the chocolate world for maintaining its vegan status by utilizing dairy-free (and soy-free, even) chips. 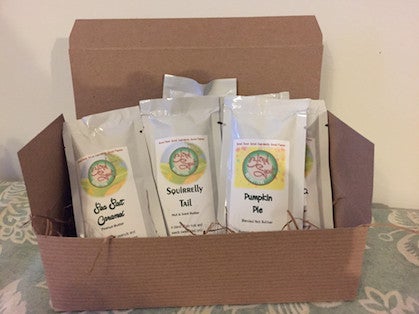 What It Is: Flavored nut-butter blends sporting a variety of nuts, including almonds, cashews, sunflower seeds, walnuts, pecans, pumpkin seeds and more.

Sweetened With: Organic brown sugar or nothing at all, depending on flavor.

The Verdict: Blind Spot wins our “Most Creative Flavors Award” for coming up with all sorts of unusual and tasty combinations. The squeeze packs also sported less oil than other brands, having a more “solid” texture than comparable nut butters. The Nut’n But Nuts flavor, which boasts the highest end of the calorie spectrum (212 calories in a more compact 1.25-oz packet than that of most comparable brands), is a good bet when space in your hydration pack is at a premium.

As with most others, some nut butter inevitably tends to get stuck in the bottom of the packet.

Blind Spot is available in a few retail spots in Pennsylvania, Virginia, Maryland and California, but primarily online at this point. It comes in jars, or a single-serve sampler set with runner-friendly, 1.25-oz squeeze packs. A portion of profits go to funding research for retinal conditions like Stargardt’s Disease, which the founders’ son Troy was diagnosed with in 2012.

Since Thanksgiving is just around the corner as we’ve been testing out these nut butters, we were a sucker, in particular, for the “Pumpkin Pie” flavor. 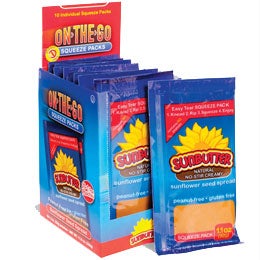 What It Is: Unflavored roasted-sunflower-seed butter, certifiably free of peanuts or tree nuts.

Flavors Available: In jars, SunButter is available in creamy, crunchy and no-sugar added versions. In squeeze packs or cups, just the natural, creamy version is available.

Squeeze-Pack Size: 1.5 oz (42g) squeeze pack or cup
Per 2-Tbsp serving:
Calories – 200
Total Fat – 16g
Saturated Fat – 2g
Sodium – 120mg
Total Carb – 7g
Fiber – 4g
Sugars – 3g
Protein – 7g
The Verdict: Like Barney Butter, except made with sunflower seeds instead of almonds, SunButter is ideal for those with peanut allergies, since it’s made in a certifiably peanut- and tree-nut-free facility; many other brands of nut or seed butters are still manufactured in facilities that also produce peanut products.

Without the distractions of other spices, dried fruits or additives, the base of good ol’ plain sunflower-seed butter is surprisingly flavorful. It’s exceptionally smooth, too, so no bits and pieces to get stuck in your teeth while you’re out running in the woods. Palm oil helps prevent separation, so the texture of SunButter is remarkably consistent.

It can be found in a wide variety of mainstream grocery stores and big-box retail, including Wal-Mart and Target. The 1.5-oz squeeze packs (which SunButter dubs their On-the-Go Snack Pack) pack most easily into hydration packs. However, 1.5-oz cups with peel-off foil lids are also available, which generally yield the most thorough access to the seed butter—no seed butter left behind!