We head to the trails in the waning days of summer. To get away from the smoke, we’re running on Pacifica’s Pedro Point Trail, just south of San Francisco on ancestral Ohlone lands, outside of our usual Oakland Hills. As a group, we are highly visible.

We get asked if we’re a high-school track team. We are not. Though I wish our sighting was not so unusual to fellow trail users, we embrace it. We embrace ourselves as outdoorists of color because there is power in the visual. There’s a beauty in reclaiming a trail together. Our joy is palpable because on these runs our spirits feel elevated, together. 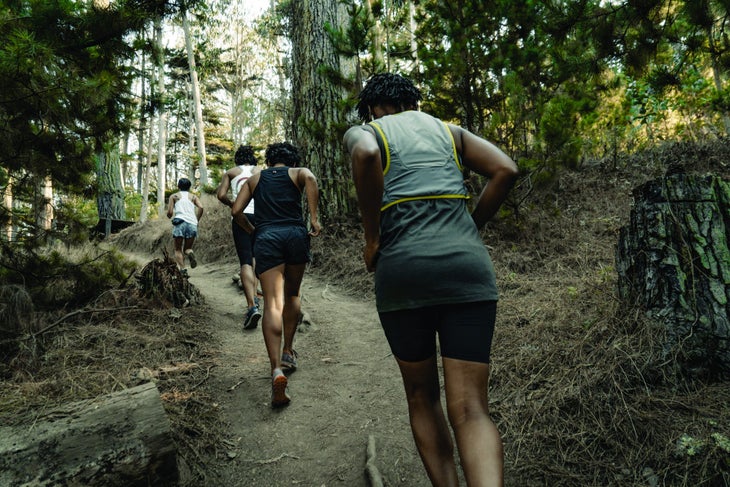 When the pandemic hit, I found myself in a new city with just a few friends, my climbing friends. Climbing, though, came to a halt—the logistics of touching the same holds or spotting someone seemed strangely perilous. So, like many, I doubled down on my running.

After months of porch hellos running past friends’ houses and exchanging texts about individual outdoor trots, a crew of us decided to run together. We started meeting in early May—the self-dubbed Oakland Trail Running Crew.

It was my first time running with a group. I usually run solo due to a breathing condition from birth, and I’ve long felt self-conscious about the way I sound. Moving West this year, I was most excited about the nearby trail runs in Oakland, and I wanted to finally enter a trail race. But, with the pandemic, my reasons for running changed. Instead of personal bests, I ran for refuge. I ran for community for the first time since I began running.

Not everyone here is a confident trail runner. We are a mix of seasoned runners and beginners alike. And I find that perfect. I find it honest in a moment where people are all trying new things. We find patience and stride. We wait for each other. No one is left behind. Societally, we are now at a moment where many non-black and brown individuals are forced to see the depth of equities and injustice for the first time. Because of how we exist in the world, we each deeply know how easy it is for someone to be left behind. Thus, we wait.

When Trail Runner asked me to write this, I found it important to share it with the voices who run with me, my peers. In the same way we are reclaiming our local trails through radical visibility, this piece itself is going too a statement on radical visibility – and push against the traditional style of essays. The traditional style has not made room for collectives, BIPOC individuals, queer, indigenous.

This piece is a textual and photographic reimagination of what a running crew can represent, and who runners ARE and who they can be. Here are their experiences as runners. – L. Renee Blount

I don’t like to run. In fact, on most days, it’s completely possible that I hate it, but it wasn’t always this way. When I was younger, my relation to running was quite different. I worked actively to find as many opportunities to run as I could. I was on the basketball team, track team, and I would wake up every morning at 5 a.m. to run before school. I loved it. Over time my one-mile morning runs became two, then three, then five. I fell in love with distance and craved a bigger outlet for this passion than basketball or track could provide. I was stumped on this until one day walking to track practice, I witnessed a line of skinny-legged kids, just like me running in a line. I’d never seen them before, so I asked a friend what they were doing and he said, “Oh that’s cross country, that’s what the white kids do.”

Over time my relationship to running shifted without me even noticing it. My morning runs got shorter until they stopped and as I got older my love evolved into dislike. Running became a thing that “I don’t do,” until recently. When my friend group first proposed we start running together, my first feeling was dread. I considered making excuses, saying no, backing out, but ultimately, I said yes because I love those humans.

I showed up, day one, full of apprehension, and we ran—but it was more than that. We stopped for each other when we needed to, we laughed and told out-of-breath stories, we listened to each other’s struggles, we supported each other. In those moments running became sanctuary and community. Running felt like something that could be for me. I’m not saying my relationship to running is saved, yet. What I am saying is that it’s healing. I look forward to the day that one mile, becomes two, then three, then five; as they once did so effortlessly and full of love. – Summer Winston

I used to be a runner. Then my knees started to hurt. I stopped feeling the urge to run. I became accustomed to moving slowly—carefully making my way up a rock face by my fingertips, or carrying a heavy pack along a trail with students.

Then, with the beginning of the pandemic, climbing and backpacking trips were put on hold. Seeking an outlet, some time under the sun and sky, I joined friends for runs along trails that I would normally hike. This time, no heavy pack. No climbing gear. No hiking boots. Just light sneakers, light clothing and the light of these beings.

I call what I do trail trotting more so than running. I slow to a walk often on the uphill climbs. I watch the turkey vultures and red-tailed hawks soar above. I notice lizards scramble away from my footfalls. I take in the eucalyptus trees shedding, marvel at the smooth chocolate bark of tall madrones. I watch eagerly for hummingbirds and rabbits.
I watch my companions’ legs, swift and strong. I feel my lungs expand. I take advantage of the downhill sections to let gravity and momentum help me remember what it is like to go fast, wind in my hair. To let go, to feel light. To feel their light as we laugh together, at junctions or stretching at the trailhead post-run. – narinda heng 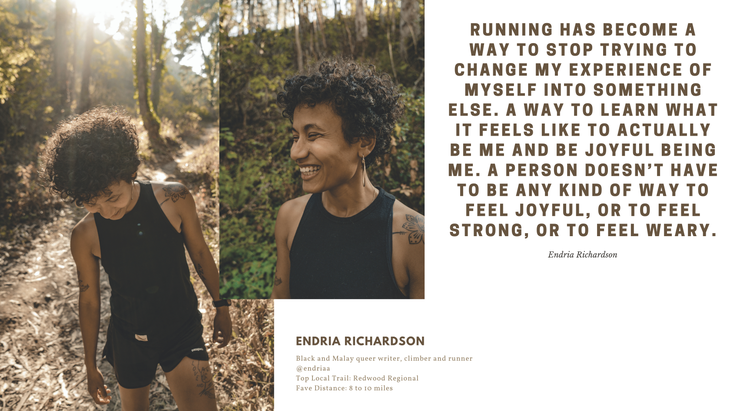 I started running when I was 12. I wanted to be on my high school’s crew team and I had heard you had to be able to run a mile before you could join. So I would jog a mile to the state college near my house, feel like throwing up, jog a mile on the track and then jog home. I was slow. I’m still slow. I still can’t breathe great when I run.

I gave up on trying to be a certain kind of runner—fast, easy, strong—when I started running on trails outside of New York, and then in California. The movement was too interesting. There was less room for wanting the experience to be something different. Like everything else I do, running has become a way to stop trying to change my experience of myself into something else. A way to learn what it feels like to actually be me and be joyful being me. A person doesn’t have to be any kind of way to feel joyful, or to feel strong, or to feel weary.

You do have to be able to feel, and for many of us, that’s not an easy thing. Running helps me feel, though. So when I run and I feel like I’m going to throw up, or like my legs are aching and tight, or like I’m embarrassed by how slow I am, it feels like I’m doing what I’m supposed to be doing. – Endria Richardson

Often, I would run to be alone, chasing the imperfect solitude of my mind. Early in the pandemic, I found myself retreating deep into “the hills” region of my neighborhood, where the houses get bigger and the faces peering out at me, whiter. It was there that I was confronted by a knotted throng of hilltop neighbors chatting and not a mask in sight. When they saw me approaching, my own mask up, one exclaimed, “Oh! Unclean!” and stepped hurriedly out of my path.

Even so-called solitude it can be hard to escape the threads of systemic racism, the roots of which are as deep as those of the pine and oak trees. Generations of training as a Black woman told me to walk away that day, because running in public is a provocation. Running is dangerous, even when it is necessary.

And so running with a group of BIPOC friends through the trails hidden up there in “the hills” is healing. It is a reclamation of the earth our ancestors tended, of running just to feel ourselves breathing, of reveling in dust that has risen and clung to our brown skins.

If we are contaminants, we are the kind that infiltrate individualist, white-washed representations of place. And when we emerge from the trees to find a group of young girls of color staring in surprise, swapping admiration and sour plums, we know that this is our legacy. This is why we run. Not in shame, not because we are being chased, but toward a future in which running is a right to move anyway and anywhere we want to. – Kaily Heitz 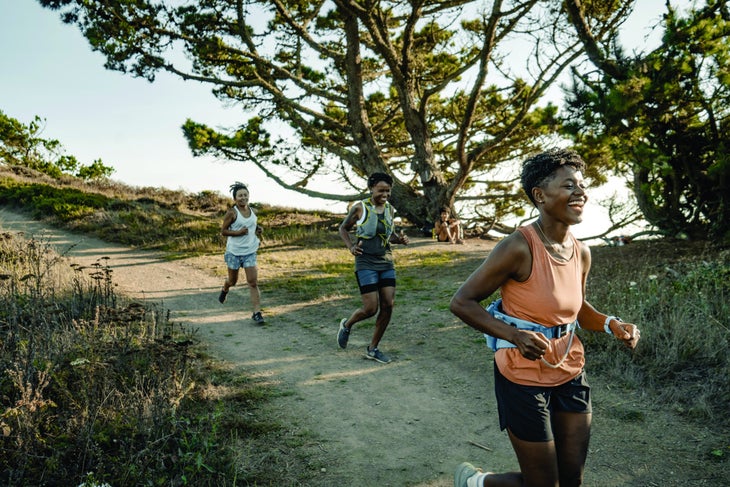