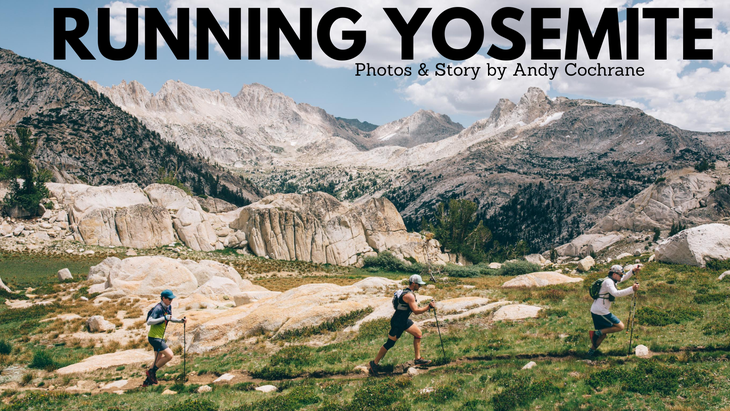 Despite its status as one of the most iconic parks in the world, Yosemite, at first glance, is a one-trick pony. Don’t believe me? Do a Google search of ‘Yosemite’ and you’ll see the same thing in every photo: the 3,000-foot granite walls of El Capitan and Half Dome that create the Yosemite Valley. Sure, I’m into giant slabs of rock as much as the next guy, but, frankly, I would much rather be winding my way through remote trails far away from the park’s crowded epicenter. If you’re reading this, you likely would too.

Based in the Sierra range of central California, Yosemite was founded in 1864, making it one of the country’s oldest plots of public land. Despite a century and a half tenure and international renown, the eastern and northern reaches of the park–Tuolumne, Hetch Hetchy, and large swaths of granite in between–are not widely known. This area, often dubbed the High Country, is not only worth exploring but arguably more enjoyable than the chaotic mess of traffic and humans in the valley.

So, whenever friends ask about the park, I encourage them to skip the gift shops, museums, and restaurants in the valley and instead explore high country. Here is one possible route to consider. 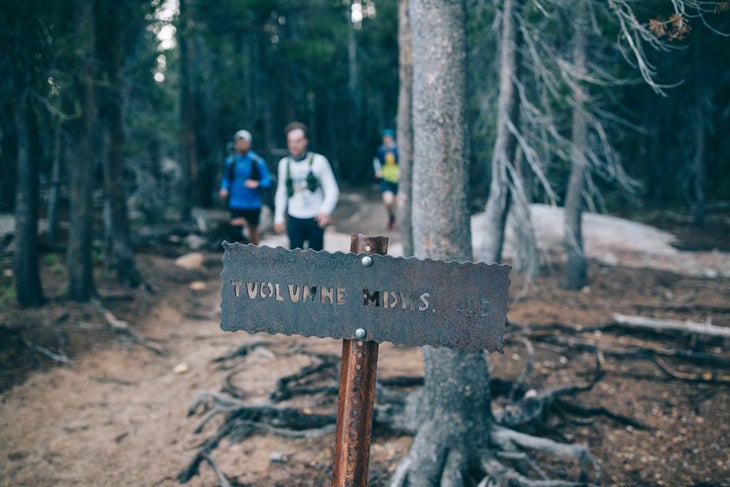 Logistics: Wanting to see as much of Yosemite as we could, we planned a point-to-point run starting in Tuolumne Meadows and heading north to Twin Lakes, just outside Bridgeport. The route follows the Pacific Crest Trail through the park, then jogs east past a series of scenic lakes in the Hoover Wilderness, before a steep and fast descent to the finish–and a celebratory swim in Twin Lakes.

The route is just over 40 miles with 6,800 feet of gain–much of it in a long slog up to Burro Pass. The upside is a number of big vistas and stunning alpine meadows. The risk is that there isn’t a great option to bail if things go wrong–the shortest way out is either forward or backward. Due to this level of remoteness, we only saw 6 people all day.

Gear: We tackled this run in late July on a historically low snow year and still found plenty of water. There are a number of alpine lakes to refill at (and swim in) and quite a few rivers and streams as well. I’d still suggest bringing a vest with a water bladder, as there are a couple long and exposed climbs that might be hard with just a handheld. We also found poles to come in handy–the Sierra has very little understory so they are pretty easy to use on this run.

Permits: Due to COVID, Yosemite has changed their permitting system for the time being. The park is open but only to a limited number of people each day. Permits need to be booked ahead of time online (we got ours a month before the trip). If you don’t have a permit you’ll be turned around at the entrance. 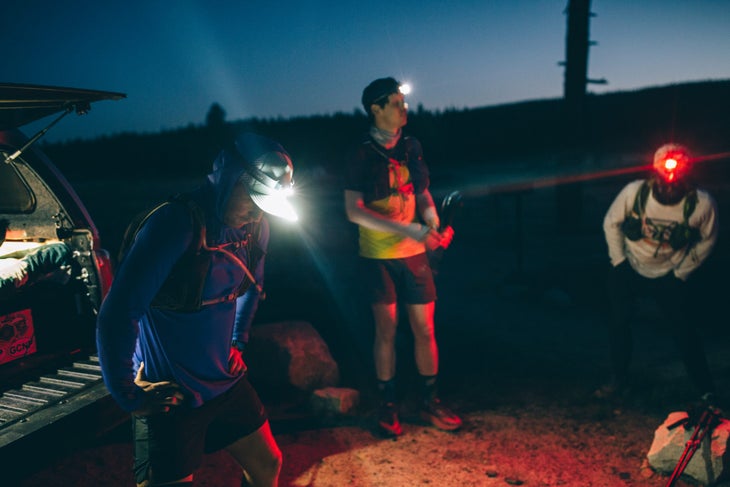 After dropping a car shuttle at the western end of Twin Lakes, we drove down 395 and up and over Tioga Pass and into Tuolumne Valley, hoping to start before sunrise. The shuttle is about an hour long. Our goal was to get a significant portion of the run done while temps were cool, saving energy for Burro and Mule Pass later in the day. 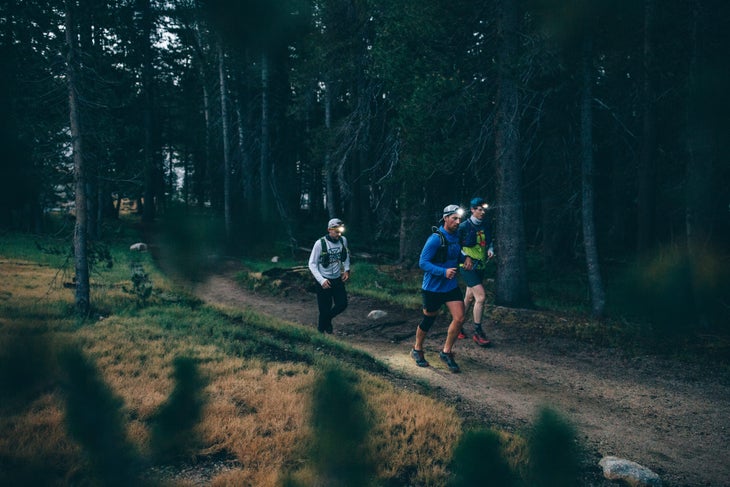 The first four miles are mostly flat and as the sun rose we were treated to some great views of Cathedral, Matthes Crest and other nearby formations. As the sun started to hit the meadow floor, mist rose from the nearby Tuolumne River creating a surreal feel to this section of our run. 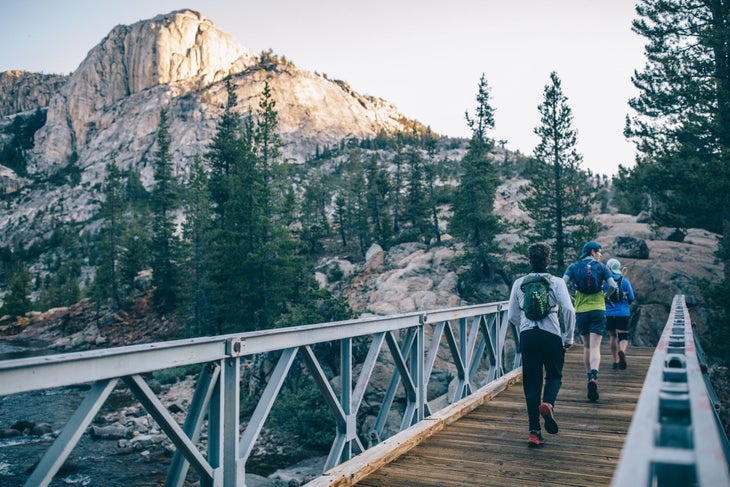 The PCT follows the river as it drops into a steeper descent towards the Hetch Hetchy Reservoir (which in turn provides water to the Bay Area), switching back and forth with great views of the next valley we would run up. 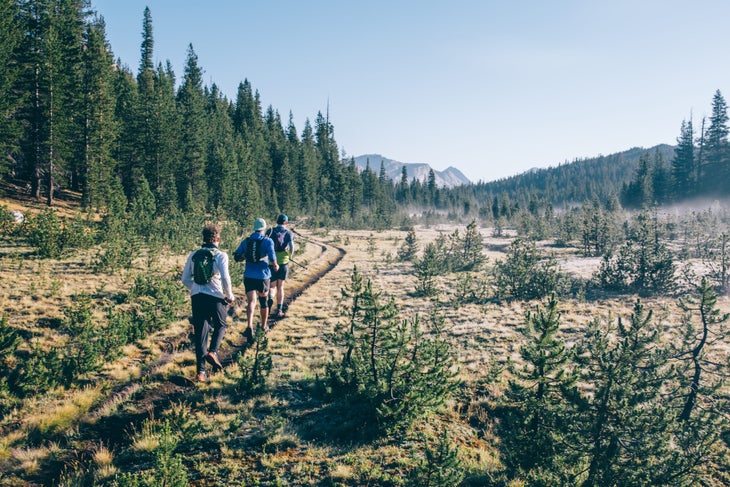 Seven miles into the route we crossed the Tuolumne and left it behind, starting a gradual uphill along McCabe Creek. After another five miles the trail rockets upward, eventually gaining a plateau and depositing us at Miller Lake. At this point, roughly a half-marathon into our run, we saw our first group of people camping on the shore of the lake. Another mile or so got us to the edge over Matterhorn Creek Basin, looking north towards Burro Pass. 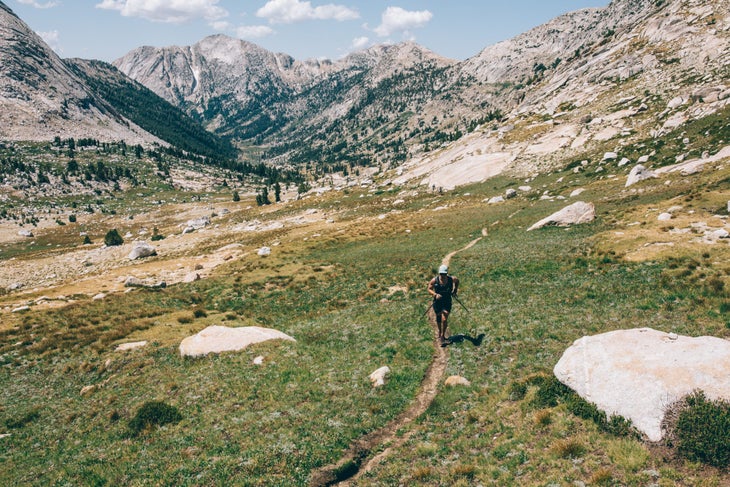 After a fast, two-thousand foot descent, we climbed our way up the valley, leaving the trees and getting into the true alpine for the first time. Mid-morning and twenty miles in, the grind began. Burro Pass sits just under 10,700 feet and we felt the lack of oxygen and hot sun. 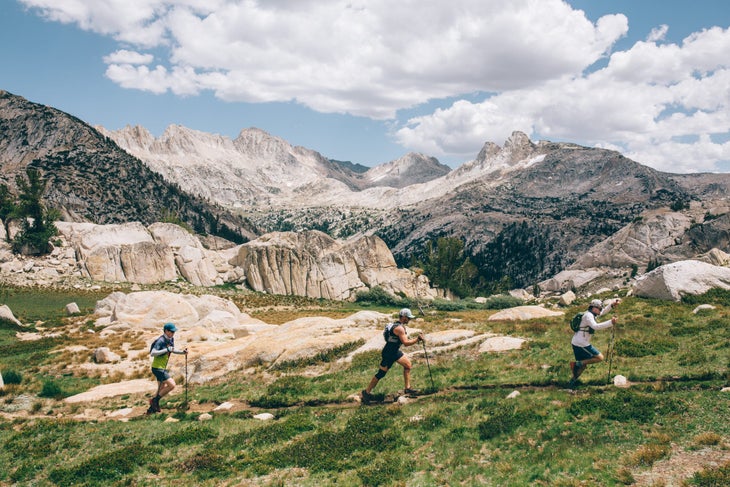 Just after the pass we took a detour to a pair of lakes for a dip. Refreshed, we flew down the valley and started the next climb up Mule Pass. With more jaw-dropping views, we power hiked to the top, reaching 30 miles at the apex. It Mule Pass is the border between Yosemite and Hoover, although other than a small sign you could never tell the difference. 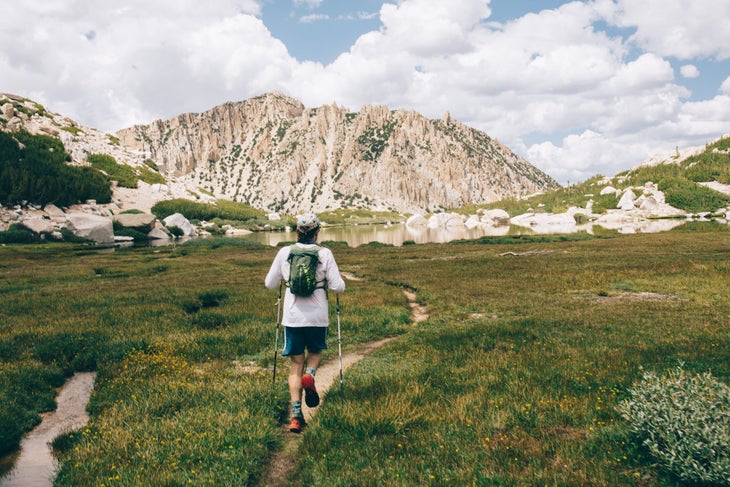 The final ten miles are all downhill–3,500 vertical feet of quad-pounding switchbacks, broken up with flat lake basins. Fortunately, the views are some of the best of the trip. The route ends unceremoniously at an RV park, where we felt like outsiders. But a couple miles down the lake we found a great rope swing, making for the perfect end to the day. 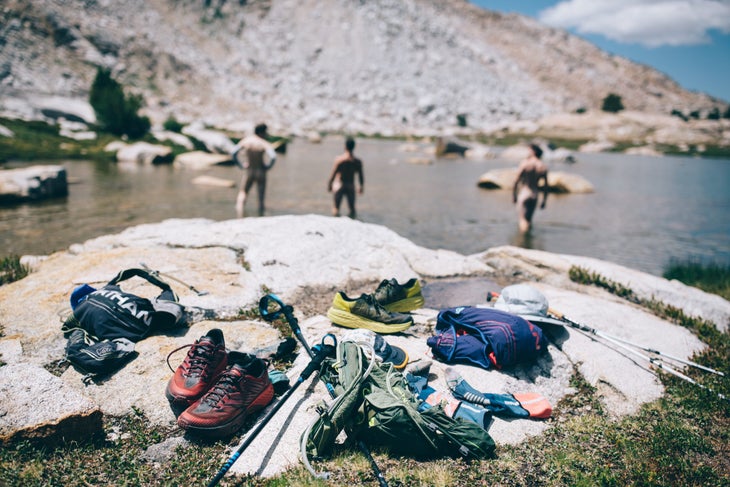