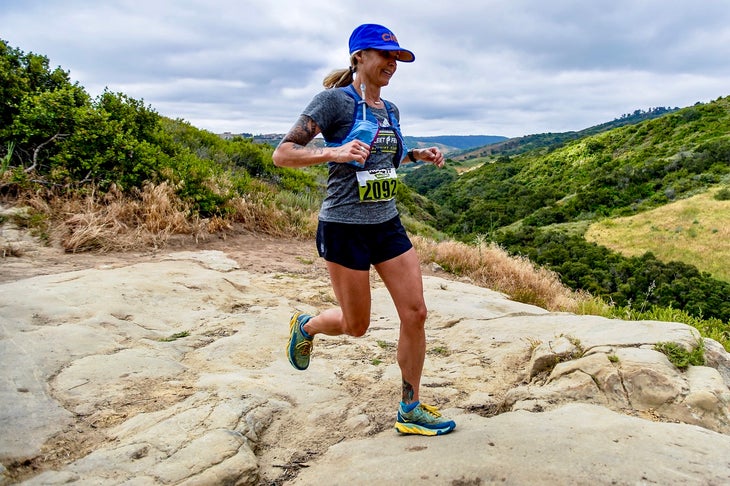 Kerri Marchionni took her first baby steps into the running world 15 years ago. She was 24 years old and only a year into a marriage that was already failing.

Marchionni grew up in Michigan, where many of her peers were getting married and having kids immediately out of college.
“To me it was sort of like, ‘Oh, that’s what we do,’” she says. She got engaged while still in college, and at 23 she was married and moving with her then-husband to North Carolina.

Almost immediately they began to realize the marriage wasn’t going to work. It was during this uncertain time that Marchionni started running.

Every day she took her dog nearby to Jetton Park and ran a one-mile loop. Her mind was often full of thoughts about the state of her relationship, or anxiously turning over ideas about what she “should” be doing with her life. But running that wooded loop, looking out at the beautiful view of Lake Norman’s shoreline, she was able to briefly step away from all that.

Even when she could only run a mile or two, running became an important source of self-belief at a time of self-doubt and confusion. “I think that I just saw that I could grow. That there was so much more. An outlet to channel some of the anxieties and the fears into something positive, just moving.”

She had caught the bug. Gradually, Marchionni continued to build her strength and endurance. Soon she progressed from one to two mile runs to 5Ks, 10ks, and eventually half and full marathons. She was doing well too—finishing middle of the back in big races and near the front in smaller ones. The appeal of committing to training and seeing improvement kept her coming back for more, and she became increasingly focused on PRs and pace. 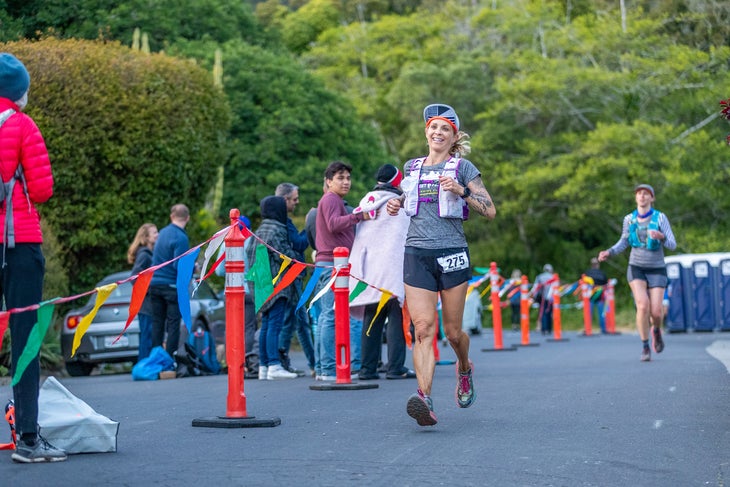 At times, her very improvement and attachment to time and PRs detracted from her love of the sport. “I think, when you start having that kind of attachment [to time] and identifying with that, it starts to become like a job,” she says.

At the same time, while Marchionni was training for her first marathon (the 2008 Chicago Marathon) she started practicing yoga on a regular basis, eventually completing her first teacher training in 2010. Yoga gave her an awareness of her body that perfectly complemented her running. By connecting breath and movement and being fully present in each moment, yoga allowed her to achieve a “stillness in her mind.” She realized that for a long time, running had been granting her that same stillness.

“Somewhere along the way, my morning training runs had become a means to breathe through my daily anxieties,” Marchionni says. “I could work through things that were on my mind in less than an hour by simply moving and breathing.” Like many runners, Marchionni struggled to continue to see running as “moving meditation,” rather than a job, as she continued to pursue her goals.

Over the next ten years, a lot changed in Marchionni’s life. She divorced her first husband, started dating a friend from work, Vinny Marchionni, changed jobs, moved to Connecticut, married Vinny, and moved several times with him, eventually packing up their Jeep with their two golden retrievers, George and Miles, and cat, Jack and driving cross country to settle in Laguna Niguel, CA.

Through it all, running was what stayed consistent. “At the time I was training for Boston, so it was kind of funny, every place we stopped I’d be like ‘Ok I’ve got to get my run in,’” Marchionni says, laughing. “[Running’s] like the common thread through everything that’s happened in my life.”

It wasn’t until 2017, while Marchionni was training for her tenth marathon, that she started running trails seriously. Her friend and co-worker pressed her to get out on trail, and she finally gave in and tried it out. The occasional hiking was humbling for her, but she kept at it. After a few weeks she found herself taking in the view from on top Santiago Peak, a mountain she can see from her house, and admitted she was hooked. 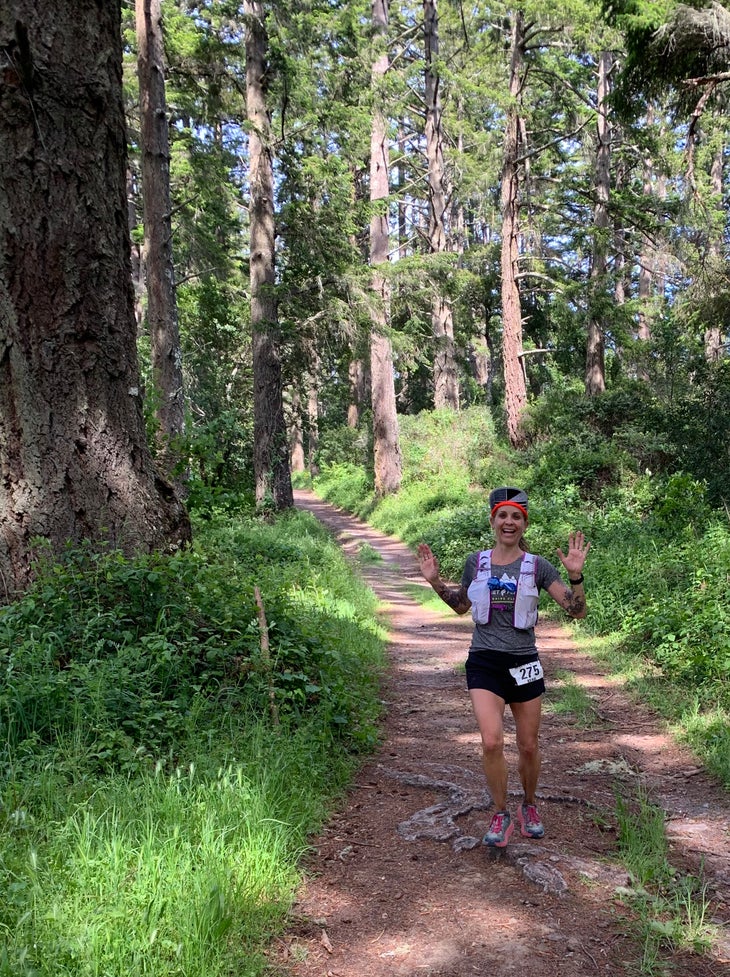 “My running pace no longer mattered when I hit the trails; I found myself enjoying the moments, the scenery, the camaraderie on the trails,” Marchionni wrote. “I found myself letting go of the expectations I had put on my running. In some ways, it was like starting over.”
Marchionni was armed with these tools when she opened her Fleet Feet store in California almost three years ago.

“The first few years, mostly the first year, was super stressful. Really intense,” Marchionni says. “We invested a lot of money. Starting a business these days, especially a retail business is so scary and so difficult. And I think I let a lot of the anxiety, a lot of the fear get to me and I just went through some really low moments.” At times she felt like she didn’t know what she was doing, unworthy and inferior. Those feelings reminded her of the uncertainty of her twenties and her first anxious miles. 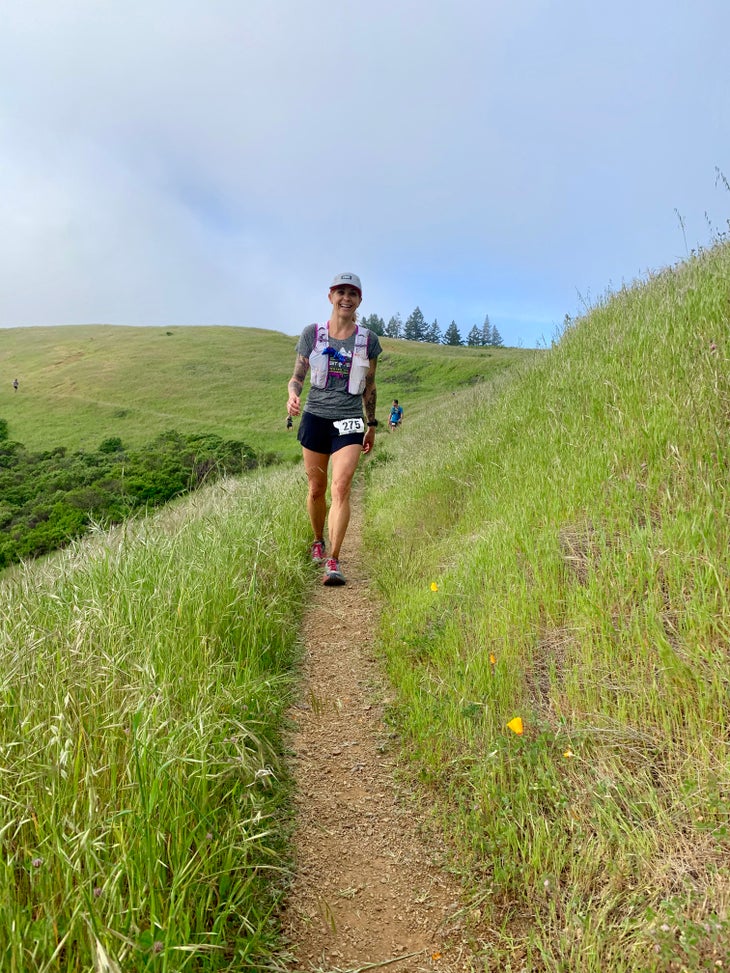 The difference was, now running wasn’t an unfamiliar venture, but an old friend. Instead of mile loops, she was testing her legs on 50ks, 50-milers, and 100ks. Instead of jogging around wearing the first shoe off the rack, she was a seasoned runner with a store of her own and pair of well-loved HOKA ONE ONE Speedgoat trail shoes laced around her feet. (Marchionni was skeptical of their unique look at first, but she’s since fallen in love with the shoes’ extra cushion and protection.) While the fear and anxiety of stepping into the unknown never goes away, running had helped her grow, and given her a reliable outlet for that stress. Not only that, her daily rambles out on trails reminded her of why she had wanted to start her business in the first place: to share a love of running with others.

Now her business, and the community around it, is growing and thriving.

Marchionni hosts a weekly trail run through her store and helps to support a running club for local kids. She started her running journey alone, but now the trail running community has become as important to her as the sport itself. “The camaraderie on the trails seems to be much greater than I what I’ve experienced anywhere else,” Marchionni writes. She is excited that her weekly group run may reduce some of the fears people, particularly women, have about running trail alone. And right now nothing brings her more joy than spending Sundays with her husband volunteering at the children’s running club she sponsors. Watching kids from two to eleven gleefully run their hearts out helps her remember why she loves the sport.

“Just seeing those kids running was pure joy,” Marchionni says, “And it made me realize we’re very lucky to do what we do.”

“I will continue running as long as my body is able to do so—and when it’s not, I will remain a part of the community because it has given me so much,” Marchionni writes.