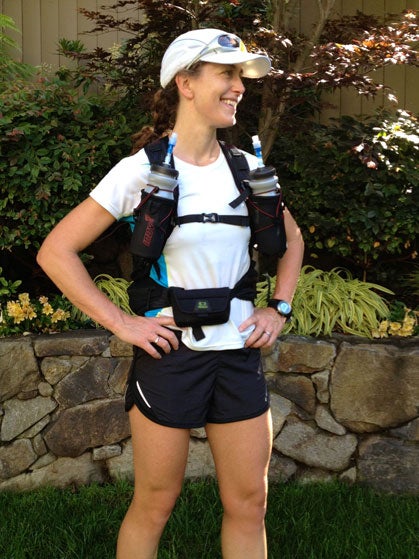 I’m preparing for a 168-mile, seven-day event in September, and I’m either confident or foolish enough to believe I can log enough back-to-back long runs over the next two months, toughen my mental resolve and unlock the keys to nutrition and hydration to go the distance. To date, I have run one 100K and a handful of 50-milers.

The prospect of carrying an adequate supply of food and gear, however, makes me question whether I’ll even make it through the first 50K leg. I rarely run long and hard on consecutive days, believing in tapers and recoveries. Backpacking? Not my thing. Give me a base camp from which I can depart on treks with a hand-held bottle and a few gels stuffed into tiny pockets, and I’m a happy trail runner.

So, what does it take to carry up to 20 pounds on your back while covering those miles, and what exactly do you bring along for the journey? That’s what I’m figuring out and will be sharing here to help anyone who might want to try stage racing or fastpacking.

I now need to condition my body and mind to run consecutive long days on challenging terrain while carrying a well-stocked pack, because on September 23, I plan to be on the North Rim of the Grand Canyon with some 70 other participants at the inaugural Grand to Grand Ultra (see previous post for event details). The race directors provide water, communal tents and salt tablets, but participants are on their own for food and gear.

We’ll cross remote desert and forest lands, climbing in and out of canyons on footing ranging from soft sand to rocky hard-pack, until we summit the pink cliffs of the Grand Staircase formation in the Escalante National Monument area of Southern Utah. The seven days are divided into six stages with the following mileages: 31, 28, 44, 24, 26 and 15. The elevation profile indicates a total ascent of nearly 22,000 feet and total descent of nearly 18,000 feet.

To start seriously training, I had to pick a pack. For advice and recommendations, I turned to an experienced stage racer, Trail Runner Contributing Editor Meghan Hicks, who carried her food and gear for a week all three times she raced the Marathon des Sables in the Sahara Desert of Morocco.

Choosing the right pack, she told me, should be an experiment of one. In other words, figure out what works for you, and no one else. To do so means practicing running with various models fully loaded.

Hicks said one member of a men’s team at the Marathon des Sables, for example, suffered mightily because he insisted on using the same pack as the rest of his team even though it wasn’t right for him. “There are horror stories about people whose backs rub off during these races,” Hicks said.

The pack’s fit, size, weight and hydration system are main factors to consider. Research led me to conclude I’d need a pack between 20 to 30 liters (L) in volume, with some combination of bottles on my hips, front or held by hand. I was advised to avoid using a bladder in the pack for water, because they’re difficult to fit into a stuffed pack and refill; plus, it’s hard to gauge how much you have left.

These packs look ridiculously small—about the size of my kids’ school backpacks—and can weigh less than a pound. But they’re enough to carry up to 20 pounds of food and gear, which is about the most I’ll want to carry on Day One. (The pack will lighten as the food supply is consumed.) Elite racers sacrifice comforts such as extra food, a sleeping pad and a camera to save several pounds.

I tried two packs: the Terra Nova Laser 20L and the Inov-8 Race Elite 25L, both weighing about 12 ounces. I liked the fit of the Terra Nova, but didn’t like its bottle-holder placement on the hips, where the bottles felt difficult to grab and bumped into my elbows.

Then a friend who’s done several 250K desert crossings with the Racing the Planet series turned me on to extra-large (750-milliliter) bottles with built-in straws that attach to the front of shoulder straps, on the chest. I ordered a couple of those holders from Inov-8 along with the bottles from RaidLight, and I added an Amphipod pocket attachment to the waist strap for extra carrying space.
I couldn’t stop laughing the first time I gave the tricked-out Inov-8 pack a try. First of all, it’s not exactly friendly to a woman’s anatomy. The bottles sit like mini rocket launchers on the sides of my breasts, which are squished by the shoulder and sternum straps. Plus, I made the mistake of using my favorite effervescent Nuun electrolyte tablets in the bottles, and the fizzy pressure made them explode like geysers in my face when I uncapped the straws.

But once I started running and tried numerous adjustments of the straps, I warmed up to this system and am cautiously optimistic it’ll work well. The sloshing and jiggling of bottles on the front straps takes getting used to, but having the water in front helps balance the weight of the back.

Other participants in the Grand-to-Grand Ultra recommend another pack system I’d like to try as well: the Salomon XA25 with an optional 5-liter front pocket that attaches on the chest and has bottle holders.

In any event, choosing a pack is only the first step; gradually getting used to running with it takes a period of many weeks. I filled mine about three-quarters full with gallon-sized Ziplocks full of dog kibble for weight. (I heard kitty litter also works well for this purpose, and might be a smarter choice for wilderness training runs where large animals might catch the scent of dog food and want a taste.) I was shocked by how heavy the pack felt—and more shocked when the scale revealed it was only 13 pounds.

Running with the loaded pack slowed my pace by a couple of minutes per mile and put extra strain on my quads and knees going up and down hills. The muscles around my neck and upper back slowly started to ache.

Jen Segger, a professional coach for the Grand-to-Grand Ultra, emphasizes the importance of core and strength training to prepare for pack running, along with squats and lunges. “Focus on developing all the deep internal muscles that stabilize the trunk, including the glutes, pelvic muscles, abs and muscles surrounding the upper and lower spine,” she says. “A strong back is key to keeping your trapezius muscles relaxed and not aggravated.”

I’m going to take her advice and add it to my to-do list, which is shaping up unlike any other from summers past. With less than three months remaining to prepare, I have to work on the following:

* Base training: Increase mileage, which currently averages around 50 miles per week, by 30 to 50 percent (65  to 75 miles per week), emphasizing back-to-back long runs and running-hiking in the mid-afternoon heat.

* Pack training: Start with one pack run weekly and build up. Wear the pack around during the day. Literally run errands.

* Terrain-specific training: Learn to run in the sand wearing full-cover gaiters. Train at altitude as much as possible.

*Strength training: Work out at the gym, with an emphasis on core conditioning, two to three times a week. Stretch, strengthen and ice my injury-prone ankles and feet to keep them from falling apart.

*Gear up: research and purchase key items such as an ultralight sleeping bag, specific clothing and required safety items. Experiment with taping feet and toes while learning the art and science of blister prevention.

* Nutrition and hydration: Experiment with backpacker-specific dehydrated food and other calorie-dense, easy-to-pack edibles. Experiment on long runs with different high-calorie food and drink mixes. Toward the end of summer, go a week eating only the type of food I plan to eat during the event. Wean myself off alcohol, diet sodas and coffee.

* Other: Rest. Sleep. Mentally prepare. And, of course … express endless gratitude to my family for tolerating my training.

Can I do it? I’m not sure, but at least I’m learning what I need to do to do it, and that’s a start.

Sarah Lavender Smith is a runner who lives in the San Francisco Bay Area. When she’s not running around with a pack full of dog food on her back, she’s parenting her two kids (ages 14 and 11) and marketing her husband’s startup firm. She blogs about trail running and travel at TheRunnersTrip.com.

Here’s What Our Editors Loved In April

What Our Editors Loved in March