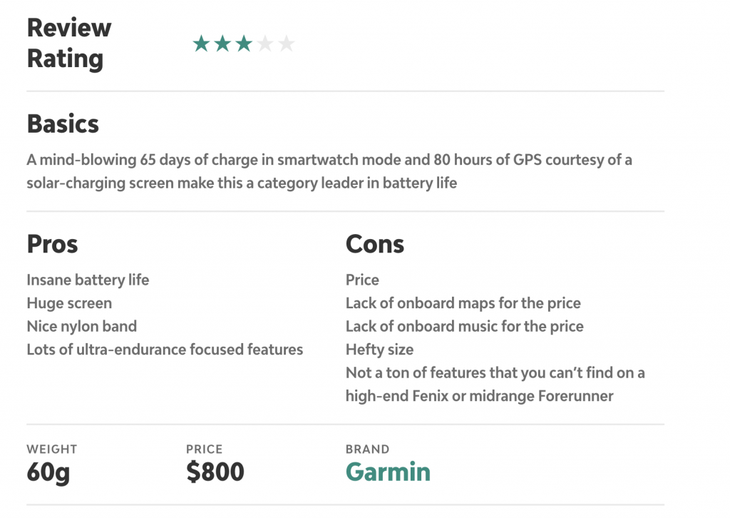 It’s been a while since Garmin actually released a new line of watches — rather than just sticking on an “X” or adding another 10 “Garmins” (or whatever the number signifies) to their naming system. Whereas the Forerunner series has always been a watch that focuses on “regular runners” — the marathon and under crowd — the Fenix series has been its burly, bearded cousin that does big outdoor adventures. The Enduro series seems to split that difference with something that truly targets ultra-endurance athletes — and yes, this includes marathoners — with none of the frilly features like onboard music, but also none of the crunchy ones like maps.

The Enduro is battery life at all costs. If nothing else, hopefully this watch serves as a stepping stone for more to come.

The big feature on this watch is battery life, and one of the big reasons is the “Power Glass” solar-charging watch face. The Enduro boasts a gnarly 65 days of regular smartwatch use and 80 hours of GPS (assuming 3 hours/day in sunny conditions) while even the similar-tech and also-expensive Fenix 6 Pro Solar Edition only tops out at a pretty industry-standard 16 days smartwatch/40 hours GPS even with solar. That’s a lot more. Of course there are other smartwatches with way more battery life than the Fenix 6 Pro Solar, but we’ll get to that later.

Elsewhere the Enduro has ultra-running focused features like an updated ClimbPro that gives you data on upcoming climbs (assuming they’re over 1,500 feet in elevation, over 3% grade, and preloaded into the watch as a course). It also has the ultra run sport mode that allows you to calculate time stopped at aid stations, an updated VO2 max estimation system that does a better job of taking into account trails, and a cool PacePro feature that helps plot our a pacing strategy using speed, distance, elevation, and a few self-selected parameters like how much you want to push the hills or if you want to negative or positive split.

It also (almost) goes without saying, but the Enduro also has multisport-necessary features like open-water, pool swimming, advanced cycling, running, triathlon, swimrun, and custom multisport configuration sport setups. These are cool, endurace-specific features, but before you take out a second mortgage to buy this watch, read on.

It’s the battery. The battery is very, very good. Seeing “45 days” on the battery screen when you charge it up is a very nice feeling, and the only downside we see is that you might end up misplacing your charger between top ups. Even without the solar glass, this watch’s battery still hits the 50 days of smartwatch/70 hours of GPS high mark, so even if your watch is mostly covered by a jacket or you train indoors, you’ll still have well over a month of use even with regular training. Not only that, but the Enduro has fantastic power management settings that lift the lid on what drains the battery and why. You can change a bevy of settings on the fly to compensate for a waning charge that could interrupt your session or race, but, with so much battery, that situation is probably really pretty rare: You’ll have weeks before it even gets into the dangerous level where you’d need to manage the battery carefully. We also love the nylon watch band that’s almost identical to the comfy Apple Watch band we’ve seen for some time.

While many of the basic features are very cool, they’re also now offered on a lot of other models: ClimbPro, ultra run, VO2 max for trails, and PacePro all come on the premium Fenix 6 series, as well as the Forerunner 245, 745, and 945 — which span a price range from $300 and up. Not only that, but the Fenix 6 series and the FR 945 all have maps and onboard music built in (the FR 745 has no maps, but does have onboard music), while the Enduro has only breadcrumb navigation (no mapping capabilities) and only controls smartphone music remotely. There are also tons of other features on the Enduro (as well as many of the upper-end models listed in this paragraph) like performance metrics, coaching assistance, sleep tracking, heat and altitude acclimatization, recovery functions, and way, way, way more.

Of course like many Garmin watches at this level, you need to be realistic about which features you need and which you’ll probably even touch (or may never even know exist!). We also had some issues with responsiveness when pressing buttons, navigating menus, and even starting and stopping. This lag is likely a glitch in the brand-new software (though we’re not testing a beta version), and I assume it’ll be fixed in software updates — but it was noticeable.

Like always, when checking out a new Garmin smartwatch, there are a jungle of features to cut though, then there’s the task of seeing what functions are actually new and unique to a watch and what’s also been included in older watches’ updates. This tangle of features is always a challenge — especially for readers — so we put together a quick-and-dirty comparison chart below to let the watches speak for themselves without forcing you to wade through 100 lines of checkmarks that you can easily find on the manufacturer’s website. Given the price, battery, and features, I whittled down the comparison to four watches: the Enduro, the Fenix 6 Pro Solar, the Forerunner 945, and the Coros Vertix — another battery heavy, map/music-lite “adventure” watch that targets the ultra-endurance crowd. (In fact, members should keep your eyes peeled for a Face Off between the two in the near future!)

To put it simply, the new Enduro mirrors the Fenix 6 Pro Solar in many ways, but it has substantially more battery power — even without activating the battery saver functions or using solar (bear in mind not everyone gets in 3 hours of sun per day consistently…). The Enduro also has a screen as big as the largest 51mm Fenix 6X, but if you want solar like the Enduro, that 51mm Fenix version is going to set you back a cool $1,100. The Fenix series does have preloaded maps, however, while the Enduro does not — sort of a letdown, given the giant screen. The Enduro is also notably missing music — which of course the FR 645 music, the 745, the 945, and the Fenix 6 series all have.

At its core, the Enduro is a Fenix 6, minus the maps and music, but with about almost four times as much battery. If battery and power management are your biggest sticking points with a smartwatch and you never need maps or run with music, this is your watch. The best equivalency to the Enduro is probably the Coros Vertix — another mapless, musicless, battery monster (45 days smartwatch/60 hours full GPS) that trades a few feature-punches back and forth with the new Garmin. That said, the Vertix is $200 less than the Enduro’s base model, but the Coros also has far fewer performance/programming/coaching odds and ends than the Garmin ecosystem — for better or for worse.

This is a long review, but that’s because the new Enduro is built for long…stuff. While most endurance athletes might not really use mapping, and maybe half use onboard music, we all train a lot and many of us race very long distances. You could get the Forerunner 745 which has many of these features for $300 less, but you’ll end up charging it probably every 3-4 days if you’re working out every day and your sessions are long.

The Enduro is not a perfect watch by any means, but my hope is that it paves the way for a line of watches that actually suits the ultra-distance crowd in a more specific way than the ones with everything-plus-the-kitchen-sink, and not enough battery to actually keep the faucet running.

Quick and dirty equivalent comparison — basically if it’s not listed, assume the watch probably has it: 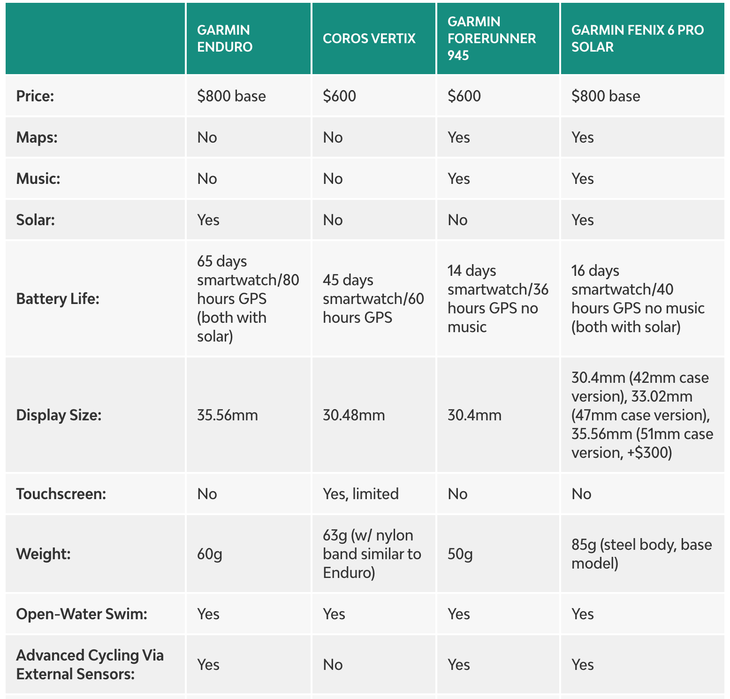 The Best Fitness Trackers of 2022

Our Favorite Trail Tech For 2021