What shoes will the elites don for this weekend’s steep, gnarly Speedgoat 50K? 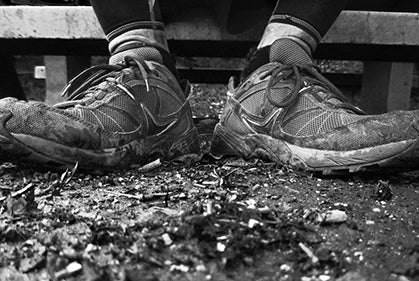 The Speedgoat 50K is this Saturday at Utah’s Snowbird Resort. As part of the US Skyrunner Series, Karl Meltzer’s masochistic masterpiece of a course will again bring out some of the top mountain and ultra runners from around the world.

Most of us will never be able to keep up with those at the front of the pack, but we have plenty in common with them. Like everyone, they have to log a ton of training to finish a mountainous 50K. They have to eat gel upon gel during a race. And they have to wear shoes … shoes that are (mostly) available to everyone.

So, what are the speedy wearing this year at Speedgoat?

Speedgoat’s course is a tough one, to be sure, but nestled between sections of snow and scree fields will be fire roads and buffed-out trails. Athletes competing there will need a shoe that works well and holds up in a variety of conditions. 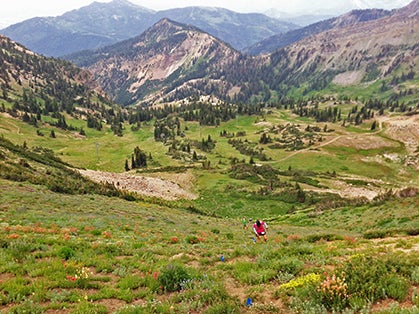 The Speedgoat course is packed with wildflowers, scenic views and no shortage of steep terrain. Photo by Jon Roig // Creative Commons.

Luckily for them, many trail shoe companies have been striving in recent years to create models that do just that – that are protective yet nimble, grippy but not too aggressive for flatter surfaces.

We talked to a handful of elite athletes to see what they would be wearing and why. [Note that Anton Krupicka and Dave Mackey, though originally interviewed for this story, have since announced they will not be competing in Speedgoat this weekend after all.]

Shoe of choice: Hoka One One Huaka

The Huaka is one of Hoka’s new forays into the lightweight shoe market, alongside the lighter but softer Clifton. The Huaka features a 2mm heel-to-toe drop for Hoka’s most minimal offset yet, and its midsole is made of RMAT, a blend of rubber and EVA Hoka debuted with the Conquest and which is much more firm and responsive – in other words, it gives users more “bounce” and less of a sinking feeling in the shoe – than standard EVA foam alone.

Hoka loyalists need not fear that the brand has lost its way, meanwhile. With a 25 mm stack in the forefoot (and 27 in the heel), the Huaka is still a very well-cushioned ride. But at under 9 ounces (men’s size 9), it is a lot lighter than its predecessors. “I chose this shoe because it it produces a responsive ride for fast running,” says Sage, who’s been rocking a prototype pair at many races this year.

We obviously don’t know too much about this shoe, as only Frost and a handful of footwear developers will have laid eyes on it before the race. But Salomon is following their precedent of creating a shoe perfectly designed for one of their top athletes. Depending on how well Frost likes it – and how popular is it among those who catch a glimpse – this could be something we see on the market next year. Salomon has done this before, with Kilian and the S-Lab Sense.

Who: Anton Krupicka [Has withdrawn from Speedgoat since the writing of this article]

Shoe of choice: New Balance MT110. Says Krupicka, “My particular pair will be equipped with a new sticky-rubber compound that NB has developed; everything else about it will be standard.”

While New Balance just came out with a new model of the MT110, featuring more cushion than its previous, more minimal models, Krupicka will be wearing the same style that has adorned his feet for the last several years.

“It has a nice in-between height of lug that works well on both fire roads and the steeper, off-trail segments that exist on the Speedgoat course,” says Krupicka. “It’s my all-around go-to racing shoe.”

The 110s have always been just a step above the truly minimal line, with enough cushion to sustain Krupicka’s day-long efforts in the mountains, but with no excess material and with a 4mm heel-to-toe offset that encourages natural running form and helps him navigate around the rocks and roots around Boulder and elsewhere. The traction is effective without being overkill – sharp but shallow lugs excel in dirt and some mud but won’t be a bother on smoother surfaces. In other words: it’s just enough shoe to protect your feet while adhering to a less-is-more philosophy.

Krupicka’s custom pair is equipped with a sticky-rubber bottom that will help him excel on the course’s climbs, but as of now, we do not know of plans by New Balance to release this version to the public.

While Montrail has come out with some lighter-weight and more minimal offerings in the past couple years – e.g. the FluidFlex – Greenwood is sticking to their big, protective model with lots of traction. With a 10mm heel-to-toe drop, it eschews the influence of minimalist, while still managing to be fairly lightweight at 8.5 ounces for women. Even traditionally structured shoes are getting lighter these days, and that is good for everyone.

On a rough course, Greenwood is sticking with a protective, well-structured shoe, because it works for her. Says she, “I feel comfortable in these shoes for many hours and they work great on all terrain including more technical and rocky terrain, with excellent traction and foot protection.”

The Sense 3 (or Sense 3 Ultra) looks a lot like Salomon’s original Sense, which was first designed as a custom shoe for Kilian Jornet to use during the 2011 Western States 100. It was lightweight but protective, with lugs that were deceptively effective for their size, meaning the shoe could run well on roads as well as on mountain terrain – something Kilian has repeatedly demonstrated in wearing the shoes on almost every surface imaginable, from the Auburn roads to the side of the Matterhorn. It also fit like a dream.

Gates says he chose it for Speedgoat because it’s lightweight and has “not very aggressive tread which should suit this race.”

“I do all my training in the Sense and have done every race so far this year in the Sense,” says Enman. “It is the most versatile shoe I have and holds its own over a wide range of conditions. Speedgoat has everything from snow to scree fields so I’ll go with the shoe I’m most confident in – in all conditions.”

Enman is talking here about the original Sense, unlike Gates. This was the model originally beloved by runners from Salomon’s athlete ranks to weekend warriors – though the $200 price point made it somewhat prohibitive to the latter.

Who: Dave Mackey [Has withdrawn from Speedgoat since the writing of this article]

The Mafate has always been Hoka’s “tank” of a shoe, sacrificing nothing in the way of cushion, outsole traction, or upper material for the sake of weight.

The Mafate Speed is still a tank, ideal to roll over whatever the trail might throw your way, but Hoka has managed to package that tank into a package that is sleeker, lighter and easier on the eyes. A new no-sew upper (now used in all of Hoka’s shoes) is more breathable and lightweight, and the RMAT rubber/EVA blend that lends more responsiveness and durability to the Conquest and Huakas (see above) covers the outsole for a well-protected and durable ride underfoot. Its 4mm heel-to-toe drop sits atop 31-35mm of cushioning material – the best of both worlds for those seeking the benefits of a midfoot strike from minimal shoes without beating up their feet in the process.

Like much of Inov-8’s offerings, the Trailroc 245 is a minimal shoe, to be sure – with a 3mm heel-to-toe drop, a footbed that sits low to the ground, and only 8.6 ounces (men’s) in weight, this shoe won’t be getting in your way on gnarly terrain. But a sticky rubber compound and aggressive lugs make it an effective trainer or racer in tough terrain, and a rock plate (inov-8’s “meta-shank”) that aligns with the bones of your foot offers protection from sharp debris on the trail without making the shoe feel stiff or bulletproof.

“I’ve used this shoe in races ranging from 10K to 50 miles and it has never failed me,” says Nichols. “I’ve found it to be perfectly lightweight and responsive but also stiff enough to handle technical trails over long distances.”

Good luck to all Speedgoat 50K participants this weekend!