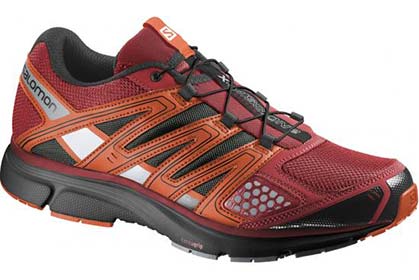 The Dirt: The X-Mission 2 is designed for runs that weave between city streets and groomed park trails. The unobtrusive rubber outsole works well on the roads, but also grips dry, nontechnical dirt. A heavily overlaid upper and thick midsole lend enough stability and protection for the trail, though many testers noted the midsole felt flat and unresponsive on the road.

Testers had mixed feelings about the X-Mission 2’s hybrid identity. Some thought that by trying to be both a road runner and a trail runner, it didn’t succeed at either. Said one tester, “For a trail shoe, it lacked significant tread, and for a road shoe, it had a heavy upper.” Others, though, found it transitioned seamlessly between road and groomed trail.

Best For: Urban runs with a mix of road and dry, nontechnical trail.

Fit: Comfortable in the heel and midfoot, a bit wide in the toebox.

“A great distance shoe for a trail where a road shoe would be sufficient but you want a little more support and protection.”

“The toebox was very stiff and somewhat painful out of the box, but really loosened up by the fourth or fifth run.”

“The toebox was too loose. On declines, my feet would slide forward and side to side.”

“It has just the right amount of tread to work on the trails without feeling like I was running in cleats on the road.”

“The higher-friction sole came in handy for slick spots on the trail, especially the black tread on the front-inner portion, well-positioned for forefoot striking.”

“This is a great recovery shoe over moderate, dry terrain, but does not handle mud or technical descents over loose terrain well.”

“I prefer a shoe that has more flexibility underfoot. [The X-Mission 2s] felt stiffer and heavier than they actually are.”
—Robin Watkins, Washington, DC

“For what a great trail shoe [Salomon] constructed up top, it is not matched with a significant amount of tread, and the upper is too heavy for a reasonable road shoe.”