Forget running in “barefoot” shoes—how about simply cheap ones? 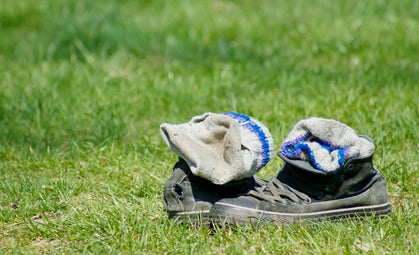 Even at my age (mid-70s), a marathon, or even two, is no longer a remarkable event for an everyday runner—but it still holds its place as the absolute test of endurance running, and in particular a test of legs, feet and footwear. So the marathon was my run of choice to test for myself the increasingly popular view that one can run for hours in flat-soled shoes.

I’m clearly not the first to shed the conventional, cushioned running shoe. Many now run barefoot, or in purpose-built, ‘minimalist’ shoes, such as the Vibram FiveFingers. In recent editions of Trail Runner, several learned contributors have enlightened readers on appropriate training methods and the footwear options for this new approach to running.

However, I want to move the debate even further with an outline of my experience: to run consecutive marathons in a pair of $10, made-in-China sneakers from Target.

Since reading Chris McDougall’s Born to Run, I have taken an increasing interest in the anthropology of running. The crux of McDougall’s argument–supported by other research–is that the modern running shoe, instead of enhancing technique with cushioning, actually prevents the foot from doing the work for which it has evolved. “Why add something when you’re born with everything you need?” McDougall asks.

“Just look at the architecture,” explains Dr. Gerard Hartmann, physical therapist to Paula Radcliffe and Haile Gebrselassie. “Your foot’s centerpiece is the arch, and the beauty of any arch is the way it gets stronger under stress; the harder you push down, the tighter its parts mesh. Buttressing the foot’s arch from all sides is a high-tensile web of 26 bones, 33 joints, 12 rubbery tendons and 18 muscles.

“Putting your feet in shoes is similar to putting them in a plaster cast. Feet thrive under pressure. Work them out and they’ll arc up like a rainbow.”

“Is he right?” I asked myself.

So 18 months ago I shed the Asics, purchased a pair of unforgiving sneakers from Target and took to the streets.  The cautious plan was to start with a walk-run combination and build up from there. I would choose the hardest surface—concrete and bitumen—and see what happened to my body.

As one might expect, the result was not uniformly good. McDougall’s technique calls in part for a shift from heel-strike to toe-strike. My interpretation was extreme, initially adopting a very odd, prancing, tippy-toe approach.  As a consequence, my calves seized. They hadn’t been worked like that for years.

Those with my welfare at heart suggested adding calf stretches. I can see the point for ballet dancers, hurdlers and gymnasts who call on the body to do extraordinary things. But we’ve been a race of runners for eons without any urge to stretch before, after or in between. So I don’t.

The distance slowly increased. Walk-run gave way to run-walk and finally to the full 8K circuit round the hills of home. After 18 months of building up to a few three-hour runs, I packed my bag for the two-day test event: along the Murray-to-Mountains rail trail in Australia from Wangaratta to Beechworth, then Beechworth to Myrtleford, through the blissfully peaceful Ovens Valley of northern Victoria.

I’ve never done a marathon before, so my legs were a bit sore and I did end up talking to myself up that long climb to the Beechworth Bakery. But my calves were fine, and the sneakers did what was expected–simply protected me from the gravelly bits of the rail trail and let my feet do the running.

My technique has been refined, in part based on McDougall and in part trial and error:

The goal is to make running as effortless as walking. Finally, to try and quantify the toe strike, after months of trial and error I’d say 55-percent toe and 45-percent heel is about right. In other words, an almost flat foot.

Since my adventure, I’ve worn right through several pairs of Target sneakers. The Asics are a relic of history.

Postscript: Following recent reports on the exploitation of Asian workers in the clothing and footwear industries, I have begun a search for ethical sneakers.

Roger Trowbridge has followed his interest in exploring “the social condition” through a succession of positions in a range of community organizations and government departments, and finally in the Social Science Department of RMIT University, Melbourne, Australia. In recent retirement, he is continuing that interest through the writing of short, non-fiction stories. Roger is a keen runner in remote areas, traveling solo.

How to Pick the Right Running Shoe