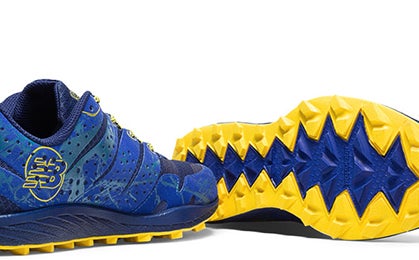 The Dirt: New Balance’s 110v2 is a significant redesign of the 110v1 model. Most noticeably, the fit has become significantly narrower, with a pointy toebox replacing the wider one of the 110v1. The mesh upper is also more breathable and flexible than its previous iteration.

Though relatively light, the 110v2 has enough cushion and stability to handle longer distances. A rock plate running the length of the foot offers protection on rocky trails, and the grippy, aggressive tread can handle a variety of terrains.

Best For: Everything from hard-packed dirt to mud and snow to rocky trails and technical descents; runs up to ultra-distance.

Fit: Narrow, with a pointed toebox.

A Moderate Approach to Minimalist Shoes