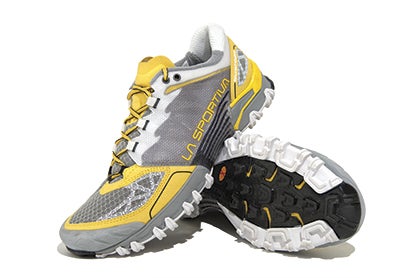 The Dirt: Slip this sleek puppy on and prepare to feel indestructible. Japanese for “way of the warrior,” the Bushido pairs monster tread and a burly frame wrapping the midfoot to battle the most menacing mountain trails.

Though it looks hefty, in fact, the shoe is lighter than most “traditional” trail-running shoes, and the 6mm heel-to-toe drop preserves a surprising amount of ground feel. “Despite my initial worry that these could be unyielding,” said one tester, “they proved to easily flex with each foot strike.”

The upper also earned high marks with a gusseted tongue and laces that, though they required a little extra finagling upfront, locked in the foot and prevented slippage on steep, twisting climbs and descents.

Best For: “This shoe will appeal to the aggressive mountain runner,” said one tester. “Groomed trails and soft rolling terrain are not its home.”

Traction: The hard, sticky-rubber lugs lend a sense of surefootedness, gripping everything from hardpacked snow to rocky, rooty trails.

Fit: As with most Sportivas, the Bushido runs small and narrow; if in doubt, size up.

The Downsides: Reviews were mixed on the Bushido’s ability to shed moisture; on mucky trails, it may feel heavy after a few miles.

Tester-Monial: “This shoe is like having my foot wrapped in Kevlar, as it offers bulletproof protection against the elements while still having the ability to feel the trail underneath.”
–George Orozco, Kent, WA