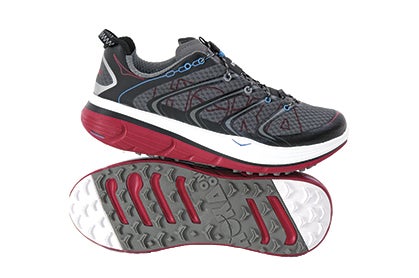 The Rapa Nui 2 (the 1 was never released in the U.S.) still offers a plush, oversized midsole, but with 7mm fewer of overall cushion than the popular Mafate. Its streamlined design also fits narrower. “It is way faster and doesn’t feel or look like you’re wearing clown shoes,” said one tester.

Best For: Long-distance runners interested in dabbling in max-cushioned footwear. As one tester put it, “This may be a stepping stone for people to transition from traditional running shoes to HOKAs.”

Traction: Testers felt extraordinarily confident on all surfaces—mud, moss, slush, slippery rocks—in every environ, ranging from the frozen tundra of winter on the East Coast to the humid, muddy rainforests of Hawaii.

Fit: Like most HOKAs, the shoe runs about a half-size big; however, it fits significantly narrower.

The Downsides: Diehard HOKA fans may lament that the Rapa Nui lacks the super-cushioned, running-on-clouds sensation that established this brand as a cult favorite.

Tester-Monial: “The new, condensed foam is firm and extremely responsive, giving this more of a racing-flat ride, instead of the traditional pillow-like feel of other HOKAs.”
–Jonathan Shark, Olympia, WA