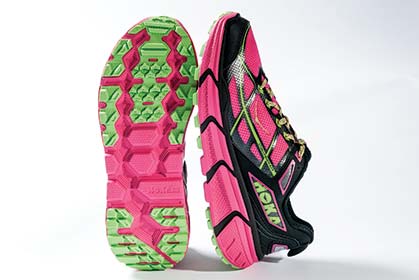 The Dirt: Though one of the higher-stack shoes we tried this season, the lightweight Challenger ATR is on the lower-cushioned end of the HOKA spectrum, making it a good option for those looking to transition into the max-cushion brand.

Testers praised the shoe’s agility on technical trails and the traction of the outsole’s rubber lugs—limited to impact zones, to cut down on weight—on dry dirt as well as mud and snow, though durability was an issue; one tester complained that two of the lugs tore off after several runs. Despite the ample padding, testers found the relatively firm midsole and pronounced rocker meant they didn’t sacrifice speed. The Challenger “felt equally at home running intervals on track and charging up rugged singletrack trails,” one said.

Best For: Everything from technical singletrack to pavement; long training runs or ultras.

Fit: Some testers complained of slipping in the heel. The toebox may be too narrow for wider feet.

“The Challenger is the perfect middle-ground shoe, bridging the gap between the new, lighter shoes in the HOKA arsenal and the older, heavier models HOKA is known for.”

“It is feather light, highly breathable and has just the right amount of cushion in all the right places.”

“While it excels on trails, do not discount it as a great trail-to-door shoe; it feels very smooth on pavement.”

“I found the Challenger ATRs fit securely on all terrain, including steep uphills.”

“The top eyelets are strangely placed, and did not allow for a secure fit in the heel. This resulted in the recurring feeling that my foot was slipping out of the shoe.”

“Truly an all-around performer; any terrain you throw at it, it will take. The aggressive, grooved treads and mini-lugs scattered across the sole are super grippy, and excelled in the mud. The firm sole facilitated a spring-like stride, which allowed me to bound over rocks and navigate through roots on technical trails with ease.”

“In addition [to the rubber lugs], the areas of exposed midsole also offer traction in soft conditions like mud, because it has diamond-shaped recesses that provide another quarter inch of depth.”
—Tom Morton, Chicopee, MA

“Over the course of a 100-mile run, two of the lugs ripped off, after only five times wearing the shoe.”