Ed. note: Because this article originally appeared more than a year ago, some of the specific products mentioned may have seen updates since, or may no longer be available. The author’s advice about gaiters, however, is timeless.

The concept behind trail-running gaiters is simple: attach a piece of fabric over the opening of your shoe to prevent sand, dirt and small rocks from getting in and causing hot spots and blisters. Like Buffs or compression sleeves, gaiters are not essential, but they can add a good measure of comfort and protection.

At the 2014 Western States, one observer estimated that roughly a quarter of the runners wore gaiters.

“I wear them for pretty much every trail run over three miles, and in all four seasons,” says Andrew Bailey who appreciates his Dirty-Girl-branded gaiters’ ability to keep out the high-desert rock, sand and even light snow he encounters on his local trails near Boise, Idaho.

On the other hand, while many ultrarunners swear by them, others think they’re more trouble than they’re worth.

“I don’t wear gaiters because I don’t believe that they do anything other than trap in heat and moisture for the climate and terrain that we have here in the Bay Area,” says Brett Rivers, 9th-place finisher at this year’s Western States 100 Mile Endurance Run.

I’m gearing up to run the Grand to Grand (G2G) Ultra again in September. At the 2012 G2G, I used a pair of desert gaiters from The Rough Country ($35) with mixed results. They did their job of keeping sand out—but they were also a pain to attach, and the fairly thick nylon fabric and snug ankle sleeve trapped so much heat that my feet perspired and I got a heat rash around my ankle.

Ultimately, I was still glad I wore them, though, because my shoes surely would have filled with sand with each step through the dunes and on deep-sand trails—but my experience with them has led me to do some more research this year about what other options are available.

Read on for a rundown of many of the available gaiter options for trail runners, including homemade versions. 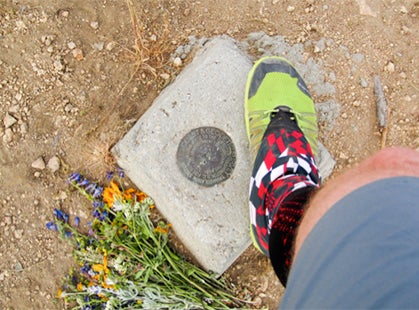 Andrew Bailey models a Dirty Girl gaiter at the top of Lucky Peak near Boise.

One popular style, sold by Dirty Girl Gaiters ($18) and Running Funky ($25), features a short spandex sleeve that fastens around the ankle with elastic. A small hook attaches the fabric to the top of the laces, and a Velcro tab secures the back of the gaiter near the heel. These come in bright colors and bold patterns, which is why you may have spotted some trail runners with neon leopard-print or rainbow tie-dyed fabric around their ankles.

Inov-8’s new Race Ultra 290 shoe ($130; just awarded Trail Runner Editors’ Choice in our fall shoe review) is compatible with an integrated, lightweight Inov-8 Race Ultra gaiter ($27). Several other options such as the Salomon S-Lab Trail Gaiters (in short and tall styles, $30 and $40), the Outdoor Research Stamina Gaiters ($35) and the Mountain Hard Wear Seta Strapless Gaiter ($35) have more durable construction and water-resistant material that may be better suited for mud and snow. 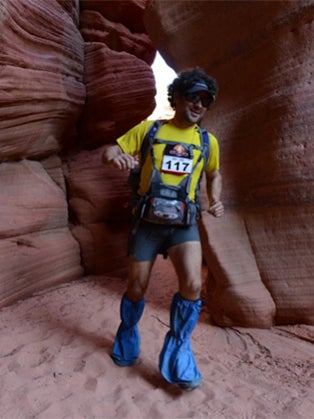 For desert races, gaiters that cover only the top of the shoe and the lace column (such as those mentioned above) will not prevent sand from passing through the porous fabric of the shoe. Therefore, most desert runners prefer gaiters that cover the whole shoe and extend slightly higher up the calf, to keep out sand when stepping deep into a dune.

Desert gaiters typically are made with light yet durable fabric such as ripstop nylon, and they attach with Velcro around the entire base of the shoe. The top of the gaiter closes with elastic or a drawstring cord.

In addition to the Rough Country gaiters I wore at G2G in 2012, other companies that sell desert gaiters include RaidLight and MyRaceKit. These models come with a strip of Velcro on the inside of their base, and this strip of Velcro attaches to another strip of Velcro you’ll need to put around the base of your shoe—which is no easy trick. You have two choices to stick the Velcro around your shoe: glue it, or sew it.

Given the trouble I’ve had in the past with store-bought gaiters, here’s the option I’m most interested in experimenting with at this year’s G2G.

Many ultrarunners who are experienced at desert racing make their own gaiters or have them custom made. Stage-racing veteran Vincent Antunez of Schertz, Texas, sewed extensions of Cordura fabric to a pair of Dirty Girl gaiters so the fabric covered his whole shoe, and reinforced the attachment system with sewed-on Velcro tabs.

“I didn’t really know how to sew, but four days before the Marathon des Sables, I sewed these together,” says Antunez, who has completed all races in the 4 Desert series as well as twice running both MdS and Grand to Grand. “Anything I can do to protect my feet, that’s what I’m going to do.” 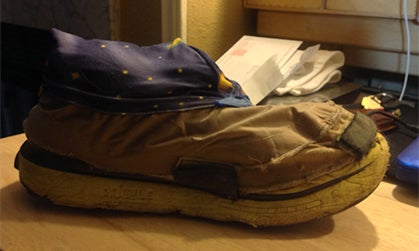 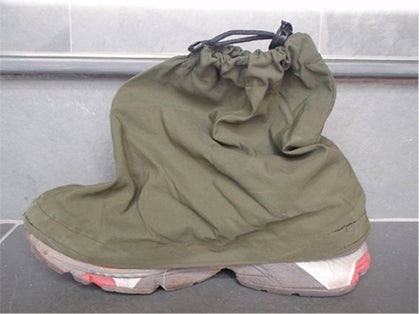 After hearing about these runners’ handiwork, I plan to try my hand at creating custom-made gaiters. I just need to watch a few reruns of MacGyver and Project Runway, mixed in with YouTube videos of the Marathon des Sables, for full-blown DIY inspiration.

Sarah Lavender Smith is a Contributing Editor at Trail Runner and will blog about her Grand to Grand Ultra preparation—and share her gaiter creation—at TheRunnersTrip.com.