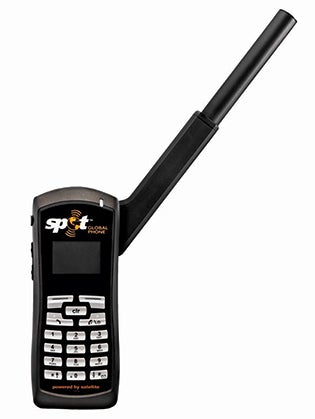 For years, I’ve pounded out backwoods runs, often solo, with nothing other than my wits, and a map and compass, relishing the lack of connectivity. My wife often asks what to do if I don’t show up as scheduled, to which I smugly reply, “Look for the crows!” Knock on an Engelmann spruce, I’ve been fortunate to incur nothing more serious than a slightly sprained ankle. … But, the older I get and the more wild adventures my teenage sons talk me into, the more wary and conservative I get. So, when I heard about the “affordable” SPOT Global Phone, which is powered by satellites, I broke down.

The compact unit weighs just seven ounces, and became an unnoticeable fixture (placed in a waterproof bag) at the bottom of my hydration pack on backcountry runs in my home of central Colorado, which often offers no cell-phone reception. The phone’s operation is fairly simple, with the ability to store contact numbers and set up/access voicemail, but the functions are not necessarily intuitive, especially compared to smartphones.

While the SPOT claims a battery life of 36 hours (in standby mode), it was really never an issue, as I left the unit turned off unless I was actually making calls and usually topped off the battery charge once home. The battery also seemed to hold a charge well between charges when not used.

To acquire a signal, you must pull out and orient the antenna vertically. The wait varied from under a minute (in open areas) to up to 10 minutes (in valleys/dense trees). Voice quality was surprisingly good, but calls would frequently drop after a couple of minutes, requiring repeating the process over, a downside in an emergency situation.

Regarding expense, the $500 cost is about what you’d pay for an iPhone, and the minimum yearly airtime plan runs $300 (for 120 minutes) and suffices for minimal emergency use. All in all, I really enjoyed the newfound sense of (false or not?) security that the phone afforded, certainly more comforting than waiting for the crows to smell blood and begin circling in an emergency.

Downsides: The unit’s bottom is not flat; hence, you can’t just set it down on a smooth stump when you’re waiting to acquire a signal. Coverage is limited to major land masses, and does not include the poles of the earth, so if you’re planning on running across Antarctica, look elsewhere. The SPOT does not send texts, although it can receive texts up to 35 characters. It’s possible to accidentally turn on the phone, with its raised buttons, which could drain critical battery power.