Last week Trail Runner traveled to Salt Lake City, Utah, for the Winter Outdoor Retailer trade show, where we scoped out the newest gear due to hit the markets soon. After three days of serious window shopping, we can attest that there are lots of exciting new products coming down the pipeline. Trail Runner will be testing and reviewing many of those products (stay tuned).

In the meantime, here’s a list of new gear we were most excited about.

The idea of a running shoe with a built-in gaiter is not a new one (think Salomon Snow Cross and La Sportiva Crossover, with their full outer shell-gaiter combo). However, this year even more brands are jumping on board with the trend. 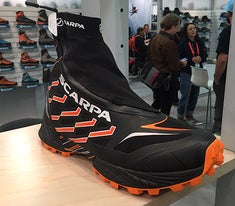 Scarpa’s Neutron G (available fall of 2017), features a waterproof, breathable Outdry upper that extends past the ankle into a full, contiguous gaiter. A waterproof zipper curves over the mid-foot and around the outside of the ankle, where it secures with a Velcro tab. With Vibram Icetrex grip on the outsole, this shoe is meant to shine in wet, wintery conditions.

For fall 2017, La Sportiva is expanding its offering of gaitered shoes, with the Uragano GTX, a waterproof shoe with a stretchy, sock-like mesh scree-guard that is attached to the top, outer edge of the shoe and slides over the foot (no zippers). The shoe is waterproof, though the gaiter is not, making the Uragano GTX a gateway between the brand’s non-gaitered waterproof running shoes and the more aggressive Crossover. 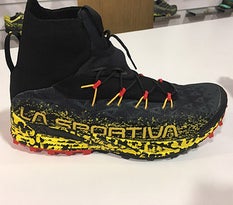 that the new Fat Tire 2 and Fat Tire Ascent launch in Spring 2017. Both shoes have been updated with a Boa closure system, like that typically found on snowboard boots, while the Ascent model features a short, close-fitting, sock-like stretch gaiter attached to the inside of the shoe and extending to the ankle. The gaiter on the Fat Tire Ascent is shorter than the gaiter on the La Sportiva and Scarpa models.

Runners who have avoided handheld bottles in the past will be excited to learn that several brands are coming out with lighter-weight and less cumbersome handheld soft flasks. 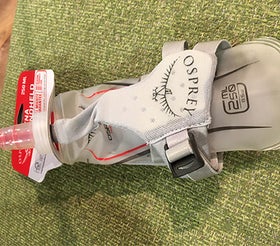 Camelbak’s new 500ml Quick Stow soft flasks come with four elastic bands that can be used in any orientation, giving you the freedom to wear the bottle in the most comfortable position. The soft flasks are also available in an insulated version.

Osprey’s take on the hand-held soft flask features a 250ml bottle and a more minimalist strap design that runs between the thumb and forefinger. 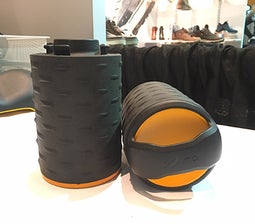 Your dreaded, oh-so-painful foam rolling session is about to get a lot more fun. This heated roller twists in half to fit into a conventional microwave.

The device is not actually made of foam, but rather a dense urethane, which the company claims won’t break down even after repeated rounds in the microwave. In our test on the floor of the convention hall, it felt similar to a hard foam roller, though the heat seemed to alleviate (or, at least, distract us from) some of the pain normally associated with rolling out.

After “cooking” for just 20 seconds, it stayed warm for the duration ofour impromptu 10-minute rollout session.Along with the “foam” roller, Moji will be coming out with a full line of heated self-massage balls and strap-on heating packs.

Thanks to new technology from Gore-Tex, brands can now wear their waterproofing on their sleeves … literally. With Gore-Tex Shakedry technology, the waterproof membrane is actually the outer shell fabric.

This, says the company, means no DWR-treated face fabric and no wetting-out after long-term exposure to rain or water. Shakedry jackets probably won’t be as durable as your traditional three-layer shell, but we’re excited to see what the new technology means for breathability. Several other companies, including Arc’Teryx, Dynafit, Mammut, The North Face and Under Armour, will soon be coming out with jackets in this material.

Merino-wool-apparel brand Ibex is releasing a new, waterproof shell made entirely from merino wool. How is that possible? We asked the same question.

The waterproof qualities come not from a chemical treatment or DWR finish, but from the fibers’ weave, which naturally sheds water. This means the jacket is made in a single layer, as opposed to the multi-layer construction of typical waterproof shells. It appears, however, that this doesn’t compromise on waterproofness: we spilled a glass of water over the jacket and it beaded up and ran off without wetting through at all.

The struggle to make gear lighter is never ending. Lately, several brands have turned their attention to foam as a place to cut down on weight. 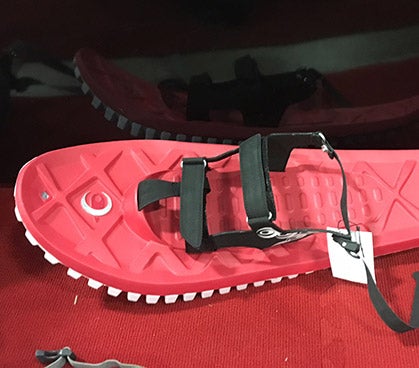 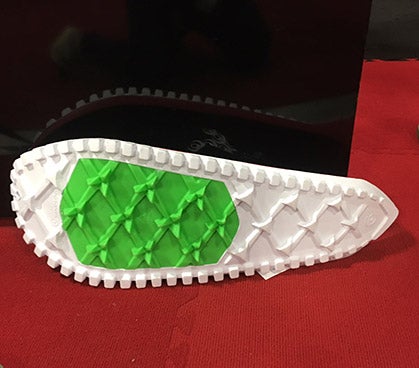 First up, we visited the Crescent Moon booth, where we checked out the first ever EVA-foam snowshoe. These snowshoes are made from the same dual-density foam found in most running shoes, with a section of harder, spiked plastic in the middle of the outsole, for increased traction. They’ll be available fall 2017.

Also for fall 2017, Salomon’s new Sense Ride shoe features Opal Technology, a foam that is, according to the company, approximately 50 percent lighter than traditional EVA foam, with higher resiliency for extra bounce. We can’t wait to put them to the test.

The Best New Running Shoe for Every Type of Trail