The annual summer Outdoor Retailer show in Salt Lake City is a cornucopia of outdoor gear, shoes, tech and tasty treats for the trails

Last week, at the annual Summer Outdoor Retailer trade show in Salt Lake City, we spent a few days scoping out new and upcoming gear for 2015. Here, we present 8 trends we noticed in the trail-running sector of the industry.

Though the majority of our readers prefer to run marathon distance or less (according to our annual reader survey), more and more each year are interested in branching out into the ultra world. And gear companies know it. Hence, the word “ultra” can be found all over the OR show floor.

Skechers has a new trail shoe for spring ’15 called the Ultra 2: 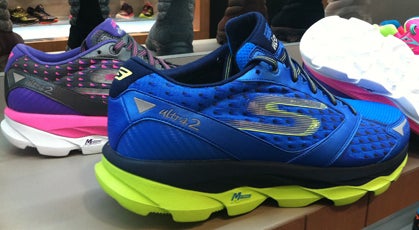 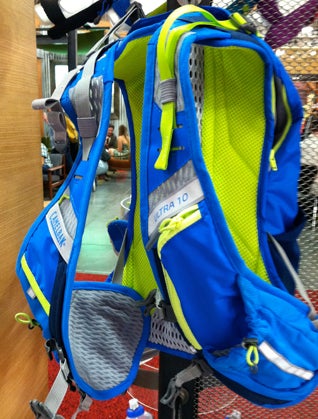 Terra Nova Equipment offers Ultra 5 (brand new) and Ultra 20 packs for trail runners or fastpackers, as well as their super-lightweight Laser Ultra 1 and 2 tents—all made from their Ultra (Cuben-fiber) fabric. (See next page for more on Terra Nova.) 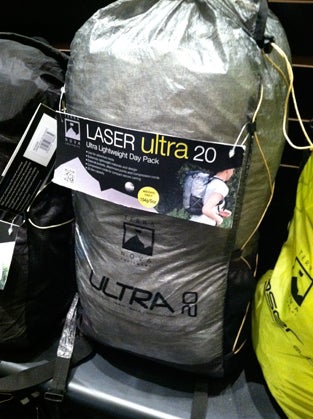 “Fast and light” has been the name of the game in the outdoor industry for many years, so this is nothing especially new. What is new is the increasing blurred line that “fastpacking” represents between trail running and backpacking or even, in some cases, mountaineering. The result is a lot of new interest in creating equipment to handle fast-and-light approaches—20-30L fastpacks, lighter-than-ever tents/shelters, sleeping pads and bags, etc, not to mention a number of longtime backpacking, skiing or even cycling companies launching their very own trail-running lines for the first time.

For spring 2015, Mountain Hardwear will release a newly waterproof version (outfitted with OutDry tech) of its popular Scrambler 30 pack—geared at a variety of users, but no doubt in line with what we’d look for in a high-quality fastpacking pack.

Ultimate Direction, which just released their Fastpack 20 to the public this week, will add a 30L version of the Fastpack for spring 2015. 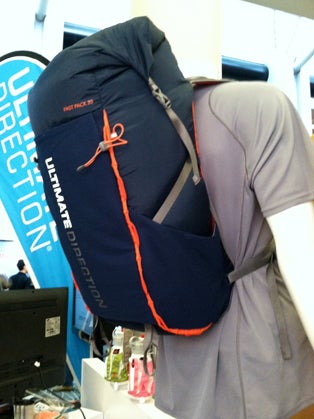 UK company Terra Nova Equipment claims to offer the lightest tents/bivvies/packs/bags on the market. Their Ultra 20 pack (see previous page) weighs in at just under 5 oz, and their Laser Ultra 1 tent—geared at adventure racers and awarded the Guinness World Record for the lightest double-wall shelter in the world—at 1 lb 1 oz, using extended guy lines for setup.

Montane, Sugoi, Mountain Equipment, Dynafit and Marmot also all appear to be focusing significant energy on newly launched trail-running lines of apparel, packs and other equipment. We look forward to testing them out and reporting back to you, our readers, on what we think!

Not only are more companies (finally!) bucking the shrink-it-and-pink-it approach to women’s gear by designing truly women-specific equipment, many are now also addressing the fact that female athletes and outdoor enthusiasts come in all shapes and sizes.

Ultraspire is adding a third size (smaller yet than either of the two S/M and M/L sizes it currently offers) to its hydration-pack lineup to fit smaller-bodied women—or even trail-running, or trail-curious, kids! 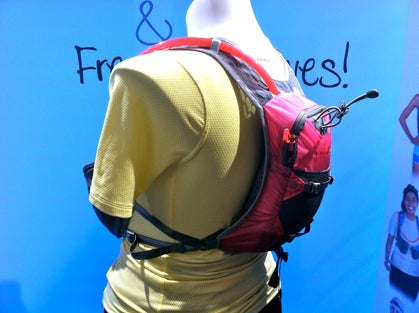 At the same time, it will be debuting its first-ever women-specific hydration pack, the Astral, which features a “Curve harness” designed to accommodate a variety of women’s bodies and shapes. It’s equipped with a 2-liter reservoir, plenty of zippered storage and front, quick-stash pockets.

Moving Comfort is adding E-cup sizes to several of its most popular, high-impact sports bras (including the Juno and Jubralee), in an effort to offer more functional options to women who’ve long struggled to find sports bras that support them in the way they need.

4. Front bottles are all the rage.

Hydration packs with nothing but a rear reservoir are so 2013. These days, everyone’s hopped on the front-bottle train, wanting more and more hydration and gear access than ever along the front shoulder straps of packs. 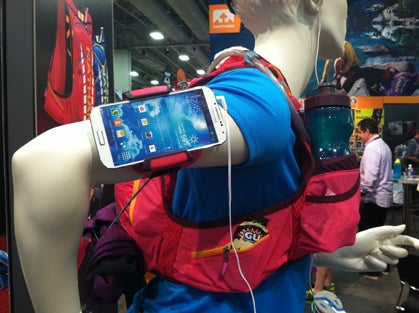 Ample front storage (and, sold separately, a new smartphone clip for the tech-inclined) on Nathan’s spring 2015 line of packs.

One of the products to make the biggest splash at the show was the goTenna, a tool for turning “your smartphone into [an] off-grid communication tool” by utilizing radio waves rather than cell towers, routers or satellites. In other words, you’ll be able to send and receive encryption-secured text messages (only with other phones that also have a goTenna) or send “Shout” broadcasts to any other goTenna-equipped phones within range in the backcountry. The device weighs two ounces and will be available in late 2014.

Want to receive texts through your GPS watch on runs? The Suunto Ambit3 Peak and Ambit3 Sport watches will connect wirelessly to your iPhone or Bluetooth, and receive iPhone push notifications on the go. The watches can also be synced with the Suunto Movescount App to create photos with data overlays to create and share “Suunto Movies.”

At last year’s OR, it seemed that many running companies were incorporating elements of both minimalism and “maximalism” (aka HOKA ONE ONE) in their footwear designs. For 2015, everyone seems to be going further down the max-cushioned path, with a nary a true minimalist shoe to be found anywhere.

HOKA ONE ONE’s forthcoming Challenger ATR will be the first HOKA to debut in big-box retail, beginning with REI before showing up on other big-box retailers’ shelves by 2015: 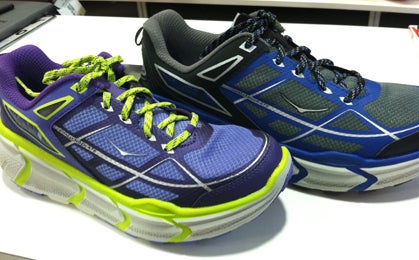 For spring 2015, Merrell is adding the beefiest trail-running shoe yet that we’ve seen in their AllOut line, the AllOut Peak: 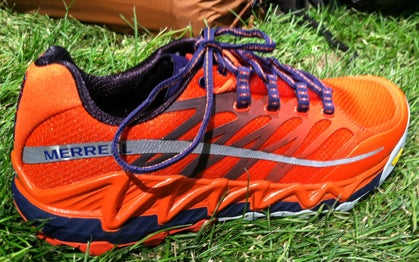 The afore-mentioned Skechers Ultra 2 is looking a little HOKA-esque as well:

At the very least, even companies founded on principles of minimalism are ramping up the protection their shoes offer to better handle longer, more technical runs.

We were stoked to see that Topo Athletic—whose debut trail-running shoe earlier this year, the MT, impressed us greatly—will soon offer a new model called the Runventure. The Runventure will be similar to the MT, still with a 2mm-drop and close-to-ground feel, but add a full-length rock plate. We’ll go ahead and call this one of the shoes we’re most excited to try out for spring 2015: 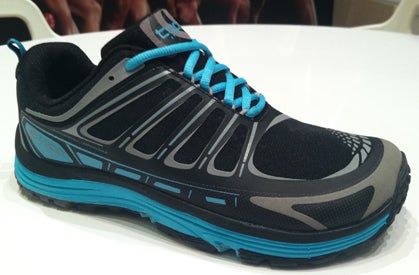 Outdoor Retailer is such a massive show that it sprawls over not only three floors of the Salt Lake City Convention Center, but also into an overflow building called The Pavilions, across the street. The Pavilions are where many of the newest companies set up their booths, and its often a hub for the kind of energy and innovation that comes out of startups. It’s also where the majority of food or snack companies set up booths, so it’s a great place for sampling tasty treats, ranging from jerky to granola bars to freeze-dried backpacker vittles. 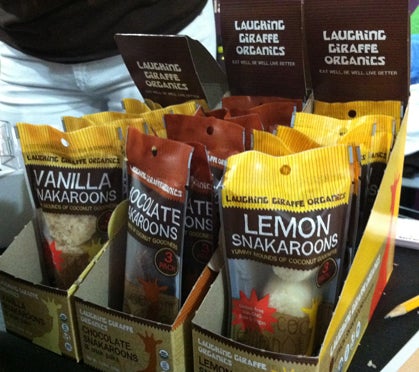 This year, our favorite runner-friendly snacks we sampled were “Snakaroons” from a company called Laughing Giraffe Organics. Like slightly less-sweet macaroons, these bite-sized, organic, gluten-free snacks are made from unsweetened coconut, agave nectar, coconut oil and other ingredients (depending on flavor)—which range from vanilla to banana to goji maca. They come in small, portable sleeves that are sure to be a hit with the trail-runner crowd.

8. Trail runners are taking to the treadmill. 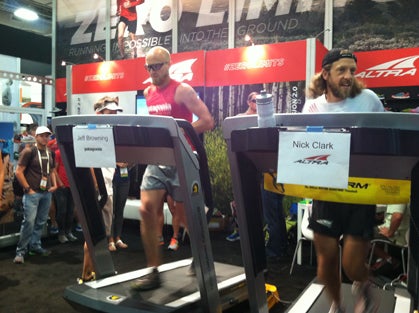 Or, at least, they did on the show floor last Friday. For the 9th year since 2005, Trail Runner hosted our Uphill Challenge with 16 elite-level runners competing on side-by-side treadmills. Who won this match between Patagonia athlete Jeff Browning and Altra athlete Nick Clark?

Or how about the final match between Sage Canaday and Max King?

Check out our 2014 UC recap here to see what happened!