Stylish performance wear, maximalist mountain runners and other gear to look for in fall 2015 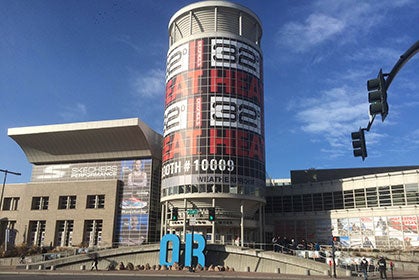 Last week, thousands of individuals in puffy coats and plaid (Trail Runner staff included) descended on the Salt Palace convention center in downtown Salt Lake City, Utah, to check out the latest in outdoor gear at the Outdoor Retailer Winter Market (OR).

We’ll be trying out the shoes, jackets, baselayers, packs, lights and other accessories we saw at the show and reviewing them in print and online. But in the meantime, here are a few of the trends we noticed at the trade show. 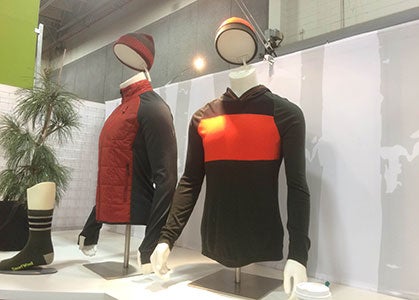 Some days, you have just enough time to squeeze in a run before your next errand or social engagement. If changing clothes in between is just not feasible, we’ve got good news: the hottest trend in running apparel is not looking too much like running apparel.

A number of companies are bringing an urban aesthetic to their performance lines in 2015. New Balance is rolling out matching “key looks” for summer, fall and winter. Brooks has its “On and Off the Run” line. Craft is launching a new, semi-fitted baselayer line aimed at the casual runner, “Be Active Comfort.” These après-ready performance pieces tend to fit a bit looser than typical athletic garb, and some are even reversible—so no one has to see that you dribbled gel all over yourself.

If you’re worried about bringing a little too much funk to your post-run engagements, SmartWool and Icebreaker both make smart-looking baselayers out of merino wool, which retains less odor than other fabrics.

Of course, if you like to strut your running stuff all over town, there are a few holdouts from the fashionable performance trend, notably Patagonia (its technical western shirt and trucker cap notwithstanding) and Ultimate Direction (which calls its forthcoming technical pieces not “apparel” but “wearable gear,” lest you think they took fashion into account at all).

2. Sticky rubber that sticks around 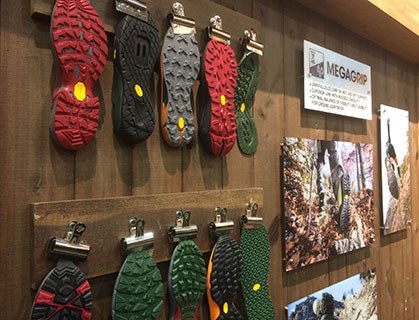 Traditional shoe wisdom has it that you have to choose between a sticky outsole and a durable one, but you can’t have both. Well, that may be changing: Vibram’s new MegaGrip compound promises stickiness and durability. Several brands, including Merrell, HOKA and The North Face, are using MegaGrip outsoles in their trail shoes this year.

At the Vibram booth, Trail Runner was invited to test out the compound on a heinously tilted slab of wet rock, and it held with no slip whatsoever. As for durability, we eagerly await the verdict of our shoe testers (see our June and October issues for comprehensive trail-shoe reviews). 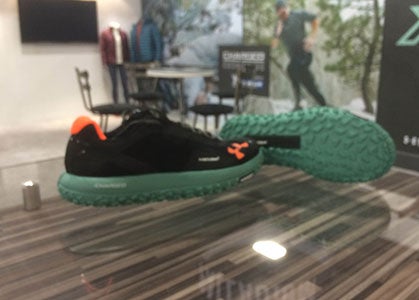 Maximalist mountain runners will have a few new shoes to choose from this year. The Under Armour Fat Tire shoe (pictured above) garnered some buzz at OR because of its unusual outsole. Made by Michelin, the aggressive rubber tread is based on a mountain-bike tire. The copper-infused insole, designed to kill odor-causing bacteria, is another useful innovation, as anyone who’s ever gotten shoes wet and sweaty will attest.

In July, HOKA will roll out its MTN collection, designed for technical mountain runs and treks. The Speedgoat, taking its name from mountain ultra extraordinaire Karl Meltzer and his eponymous 50K, features a Vibram MegaGrip (see above) rubber outsole with 4mm lugs and a rubber toecap, along with the high stack height (33mm) HOKA’s known for. Also new from HOKA: the Tor Ultra Hi WP, a trekking boot with the sole of a running shoe (so to speak); we at Trail Runner are eager to see how it performs as a trail runner. 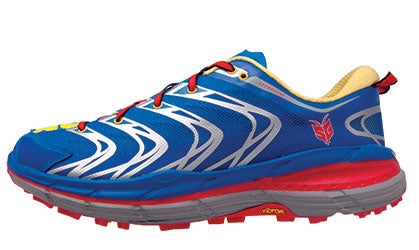 The HOKA Speedgoat. Courtesy of HOKA. 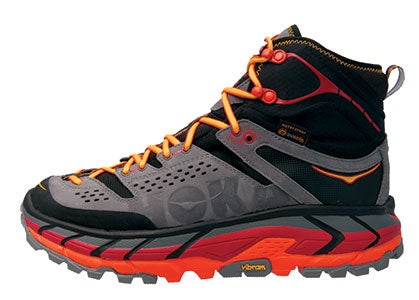 Rather than draping half a dozen different hydration belts around your mudroom, how about just one? Of the several modular, customizable products we saw at OR, our favorite was the Groove fuel belt system from Ultimate Direction. The Groove has two different fronts and two different backs, so you can create your ideal belt depending on whether you want a front pocket and how many bottles you want to carry in back.

Also in the nascent modular market: GoMotion, which is coming out with several modular, wearable lighting systems, and Luna, whose Gordo sandal system includes sandal, waterproof bootie and screw-in “goatheads” for winter traction. 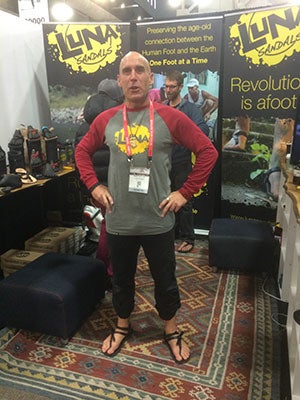 Barefoot Ted, of Born to Run fame, showing off the latest Luna Sandals at the Outdoor Retailer show.

Just about everyone, including this publication, has proclaimed the “death of minimalism” at some point in the last couple of years. While it’s true that the minimalist shoe craze has calmed down since its Born to Run-inspired heyday, the death sentence may have been premature.

What’s more likely—as indicated in conversations with such brands as Vibram, Luna Sandals and Xero Shoes—is that the market for minimalist footwear is returning to its natural state following the FiveFingers bubble bursting, with a smaller but more dedicated core of barefooters keeping minimalism alive in some form. (Case in point: our sandal-wearing January-issue cover boy, Patrick Sweeney.)

(For the record, Luna doesn’t consider itself solely a barefoot or minimalist brand, Luna president Ted McDonald tells Trail Runner. “We make ‘adventure sandals,’ some are thick, some thin—all of them awesome,” he says.)

6. Dogs never go out of style 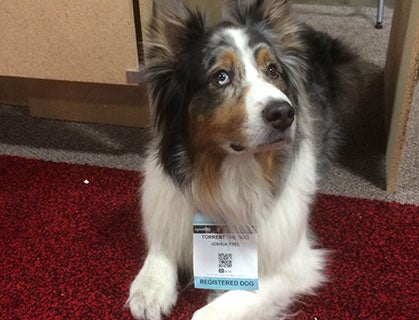 Torrent, a registered dog working out of the Joshua Tree Skin Care booth.

Anyone hanging around the Salt Palace last week may have noticed a surprising number of canines attending OR. That’s right, OR gives out “registered dog” badges. (Of all the categories of badges—working media, retail buyer, exhibitor, media sales—registered dog has arguably the most VIP status.)

In addition to the animals working the floor, a couple of booths had canine mannequins showing off the latest in performance dog gear. For trail-running pets, in particular, Ruffwear and Kurgo both make running-specific belts to clip leashes to and booties to protect those paws from cold and heat—not to mention “ruff” terrain.