Seeking challenges and human connection in the Southwestern desert 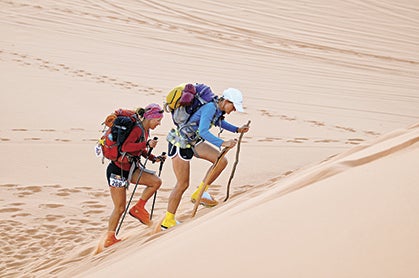 Julie Jenson of Kanab, Utah (in blue) and Crystal Flaman of Kelowna, British Columbia, work together to conquer the sand dunes. Photo courtesy of Grand2Grand Ultra.

We groaned simultaneously and pushed off our poles for another set of 100 counts running, 20 counts walking. It was the humble, yet maintainable pattern that Frank, my new friend from Germany, and I had been using to get through the extreme midday heat and over the undulating sandy track.

We’d only linked up a few hours ago, but I’d already learned a lot about Frank—the story of how he’d met his wife on Spain’s Camino de Santiago trail, his struggle with a career that kept him away from home and his heartache of losing his sister. They were the kind of personal life nuggets only shared so quickly under the influence of a good trail run.

Now that we had settled into a comfortable silence, I put my headphones in. I laughed when the next song came on and he looked over at me quizzically. “Bing Crosby’s ‘White Christmas,’” I explained. “I knew it would either make me smile or really piss me off out here.”

Frank and I were working our way through Day 3, “the long stage” of the Grand to Grand Ultra (G2G). Now in its second year, G2G is the first multi-day self-supported stage race in the United States, covering 170 miles in seven days. With 20-pound backpacks containing all our food and gear for the week, we’d started as 113 international racers peering over the precipice of the Grand Canyon. Our group pilgrimage would lead us to the dramatic Pink Cliffs of the Grand Escalante.

What were we searching for on this journey? Most often, the answers my fellow competitors gave included: an extreme athletic challenge, an escape from modern concerns and distractions, a week immersed in nature. But, there was another, unspoken answer among us—the chance to share these rich experiences with like-minded wanderers.

In the first two days, we’d travelled through fields of scrub brush and cactus, climbed up rocky cliffs to a pinyon-pine forest and come back down soft sand to arrive at our roving make-shift city of white tents, footstools and hot water. There, we’d retreat to our tents to lie numb and content, elevating our feet and sucking down powdered recovery drinks.

As cowbells rang at each day’s finish line, we cheered for other racers and waited like doting mothers for our tent-mates to be safely in. At dusk, G2G camp manager Dan Stake would build a fire, and we’d shuffle our tired bodies out to the circle to absorb the warmth and swap stories over freeze-dried dinners. At home, I would have been showered and back on my laptop, but here, sweat and dust became just another layer of varnish, and the only option for evening entertainment was human connection.

Back out on the trail, the long third day turned to night, and I found myself alone again. Following winding pink flags, now augmented by glow lights, I ran smack into a giant sand dune. A few racers were sliding down the unstable mass, trying to find purchase in what felt like a pile of granulated sugar.

Imitating the stance of a sumo wrestler, I planted wide, then heaved myself up using my poles. It was inelegant, but effective. I flopped over the first dune crest, panting with exertion and relief—only to see hundreds of glowing markers stretched out on the desert peaks ahead of me like a string of twinkling Christmas lights.

Far off in the distance I saw a blinking red safety light—mandatory for all racers to wear. I honed in on this beacon and spent the next hour steadily reeling in the mystery racer. When I finally reached him, he said calmly, “Good work, girl. I’ve been waiting for you.”

With no anger over being caught, the man squeezed my arm and welcomed me into his solitude. His name was Brian. We became instant comrades, glad to walk together for a bit and share a sky full of stars and a fat pumpkin moon. Tomorrow, we’d all have to find the strength to conquer three more stages of racing—but tonight, we were simply trail runners, united by a common sandy purpose.

Jenn Hughes is a Washington-based ultrarunner and owner of RunPrettyFar, a women’s running-apparel company. She finished as the 5th female at the 2013 G2G.

This article originally appeared in our March 2014 issue.

7 Quick-Hitter Takeaways From The 2022 Western States 100