Get Caught Up in the Vortices 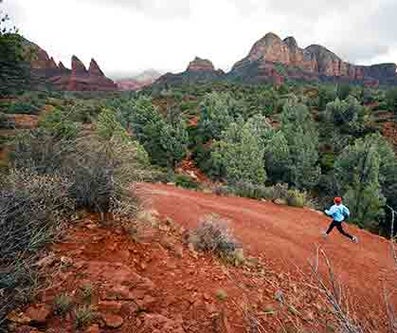 Senja Palonen strides out on the Little Horse Trail.
Photo by Richard Wheaton

Get Caught Up in the Vortices
Sedona, Arizona

Two-hundred-and-seventy-million-year-old red rocks, 12,000-plus years of human history and inexplicable energy vortices spinning in and out of the Earth: Sedona offers an appealing aesthetic, long history and quirky modernity. The town is named after Sedona Arabella Miller Schnebly, the wife of the town’s first postmaster, and sits in the Verde Valley of central Arizona at 4500 feet above sea level.

Part upscale-resort chic, part hippy and part New Age, Sedona has a vibe that everyone loves. The pedestrian-friendly downtown filled with shops, art galleries and restaurants is an easy place to entertain yourself before and after trail running on the hundreds of singletrack miles accessible from downtown or via a short drive.

Jason Henrie, a 38-year-old trail runner and the Marketing and Membership Director at Flagstaff’s Vertical Relief Climbing Center, thinks you’ll love trail running in Sedona as much as he does. “I fell in love with the trails’ diversity,” he says. “I can run slickrock among cactus and classic red-rock views, and then disappear into a canyon filled with tall grass, lush green trees, a creek and butterflies. Sedona is a world-class trail-running destination.”

Get There. Fly into the Phoenix Sky Harbor International Airport and rent a car for the two-hour drive north to Sedona. You can take a shuttle from Phoenix’s airport, too, but personal transportation is recommended for trail running and touring the region.

Play Tourist. Visit one of Sedona’s four main energy vortices, the Airport Vortex, the Cathedral Rock Vortex, the Boynton Canyon Vortex or the Bell Rock Vortex. “They are beautiful locations on rocky outcrops and spires,” says Henrie. “See if you feel the energy. If you don’t, there will probably be someone there who does and it is fun to watch them.” Access more Sedona scenery by renting a mountain bike or taking a jeep tour, recommends Harrison. Combine a Sedona trip with an outing to Grand Canyon National Park, a two-hour drive.

Take Note. Temperatures creep close to 100 degrees in July and August, and violent-but-brief afternoon thunderstorms occur in July, August and September. Complete summer trail runs by noon or visit during another season to avoid both.

Courthouse Butte loop.
Run up the trail from Bell Rock Trailhead until you intersect the Courthouse Loop Trail. Go right and run this flat, five-mile loop counterclockwise around Courthouse Butte and Bell Rock. Watch out for Spaceship Rock, which looks like a hovering orange disc about to drop off aliens, and detour into the energy vortex atop Bell Rock to see if you’re positively affected by its supposed swirling energy. Says Henrie, “Run this loop at sunset and see the red rocks glow.”

Made in the Shade, Slim Shady, Highline, Baldwin, Templeton, Slim Shady and Made in the Shade Loop.
This 10.6-mile loop features 1800 vertical feet of stiff, techy climbs up to the unmarked Highline Trail, which runs about 800 feet above and provides views into Sedona’s land of red. The secret to success on this loop, says Henrie, is to “stop by Absolute Bikes for a map and the beta. The route practically starts at the shop’s door, too.”

Jim Thompson, Brins Mesa, Forest Road 152, Vultee Arch, Sterling Pass, Highway 89, North Wilson Mountain and Wilson Mountain loop.
Run this 24-mile loop clockwise from the Midgely Bridge Trailhead, says Emily Harrison, a 26-year-old professional runner for adidas-McMillanElite based in nearby Flagstaff. “Begin at 4500 feet, top out at about 7000 feet and negotiate three big climbs,” says Harrison. The route includes about 1.6 miles along Forest Road 152, a quiet, dirt road, and 1.2 miles on Highway 89, a paved, two-lane road. Harrison recommends soaking in nearby Oak Creek post-run, so grab a recovery drink from your car at the trailhead and descend a short distance to the creek on the Huckaby Trail.

Mogollan Monster 100.
Starting and ending in Pine, a 70-mile drive southeast of Sedona, this 106-mile, September trail ultramarathon spends its time between 5000 and 8000 feet altitude in the Arizona high country.

The Best Women’s Hiking Apparel of 2022

Once And For All: Here’s How You Should Poop In The Woods