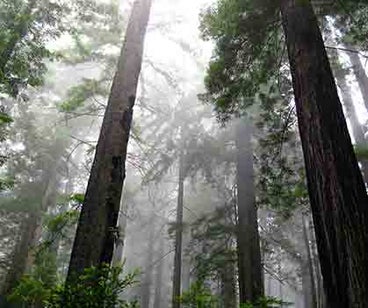 Tall, dark, handsome Sequoia sempervirens canopies northern California’s coast. Commonly called the coast redwood, this tree grows taller than a football field is long. Though this region was once stripped of its redwoods by the logging industry, a few old-growth forests still exist and second-growth redwoods now proliferate. Together these big guys and gals gather millions of tourists annually.

The ocean coast is another bonus, adding diversity to the local environment and recreation opportunities. The city of Eureka and its neighbor Arcata lie between the Pacific Ocean and the “redwood curtain,” as its called by 36-year-old anthropologist and ultrarunner Todd Braje, who lived and ran in the area for three years. Karen Kidwell, 27, also calls Eureka home. Says Kidwell, “Within an hour’s drive, I can run on the beach, sand dunes, coastal bluffs, steep gravel roads through recovering forests and under old-growth redwoods. I love the variety.”

As compared to the rest of coastal California, this region is relatively undeveloped and inaccessible and, thus, nicknamed the Lost Coast. Humboldt County, the county that contains Eureka, is known for a cannabis-growing industry that serves California’s medical marijuana needs. Living where the Lost Coast, redwoods and cannabis collide seems to be good for Eureka, as town has a chill, funky feel that you’ll encounter wherever you run, tour or eat.

> 27,191 people call the city of Eureka home.
> Approximately 25 percent of Humboldt County’s economy is founded on marijuana.
> 38.1 inches of rain fall over Eureka every year.

Get There.The Eureka/Arcata Airport is located 16 miles north of Eureka, offers daily service to the Sacramento and San Francisco airports and has car-rental agencies. Alternately, it’s a five-hour drive from the San Francisco, Oakland or Sacramento international airports.

Play Tourist. Cruise the sights of Old Town Eureka pedestrian-style, which preserves the Victorian era. “See the Carson Mansion, Eureka’s largest Victorian home,” says Kidwell. “Or go to the North Jetty on the Samoa Peninsula just northwest of Eureka to watch surfers and search for dolphins.” Though you may see them on your trail runs, take time to take in the big guns, the coast redwoods, via a trip to one of the units in the Redwood National and State Parks or Humboldt Redwoods State Park.

Learn More. Study up on local trail running or other explorations via the websites of Redwood National and State Parks and Humboldt Redwoods State Park. The good folks at the Save the Redwoods League have worked since 1910 to stop logging and care for redwood trees.

Take Note. Poison oak grows rampantly in coastal Cali. Know what it looks like, and wash yourself and your clothing down with Technu post-exposure.

Arcata Community Forest loop.
This approximately 12-mile trail system is located adjacent to Humboldt State University in Arcata. Says Braje, “Get lost in the network of wind-y, hilly trails; experience the forest’s second-growth redwoods; receive a few catcalls from the daily drum circle of college kids; and catch a whiff of the region’s underground economy.” Join the Arcata community and connect the perimeter trails for an eight-mile loop.

Headquarters Forest Trail Lollipop.
Six miles southeast of Eureka is the Headwaters Forest Reserve and the Elk River Trailhead. This 10.5-mile route is mostly an out-and-back with a small loop through an old-growth redwood forest. “Scars of the logging industry, burned-out stumps and deforestation landslides, are visible in the first few miles,” says Kidwell. The trail leads to a half-mile loop through a stand of old-growth redwoods, “one of the last of its kind,” adds Braje.

Fourth of July Arcata Marsh 5K.
Race on “flat and fast dirt,” according to Braje, with views of Arcata Bay.

Clam Beach 5K Challenge.
“With river crossings and sand running, this is the most popular, local trail event,” says Braje of the July race.

Arcata Community Forest 2-mile or 5.5-mile run.
“A hilly trip through redwoods with all the cultural flavor of the Community Forest,” says Kidwell of this September race.