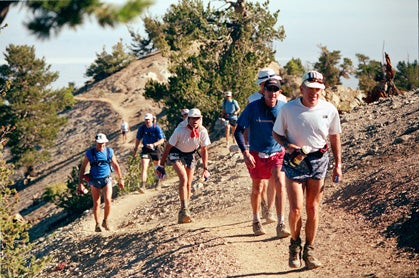 Where: Wrightwood, California (elev. 5935 feet), an outpost in the San Gabriel Mountains.

Rundown: Since 1986, a relatively small and steady stream of trail runners— rarely more than 150—have circled late summer or early fall on their calendars. The AC100, however, is somehow overshadowed by many other 100s in the West, but not because it is a “softie.” Even though the race has a cumulative drop in elevation, it still challenges runners with nearly 22,000 feet in total climbing, at least half of which is found at altitudes over 5000 feet. The terrain is high-mountain desert for much of the way, before plunging to a finish barely 800 feet above sea level. The AC is a singletracker’s dream, with 92 total miles of trail.

“As a first timer, you constantly feel that you’re walking in history,” says Adam Ray of Oakland, California, who, in 2006, chose the race as his first-ever 100 miler. “And walk you will.”

The AC also offers unique sights and sounds of California. Ray recalls some of his memories from his run (which he completed in 27:18): “The razor ridges of the San Gabriels, the beauty of the high desert and the bell clanging that accompanies the Tarahumura runners.” The wildlife also helped to enhance Ray’s run: “I had the experience of being paced up a steep hill by a tarantula.”

Mettle Test: Angeles Crest-ers raise their eyebrows and their stomachs do cartwheels when recalling the final 25 miles, which are often considered among the most difficult in ultrarunning. This is where the cool of night slides into the rearview mirror and the heat combines with dust, humidity, scratchy overgrowth and the cumulative toll of over 70 miles. Mike Palmer, a Berkeley, California, resident who has completed AC 11 times, gets more specific: “The climb up to Sam Merrill at around 87 miles will get you in touch with the voices that lurk inside your head.”

The AC crowd tends to stick to the southern California races. And why not? There are many down there. In preparation, AC runners gravitate toward big climbs, heat and sunshine.

Percent of the course that
is road, either dirt (six miles)
or paved (two)

Cumulative drop, in feet,
of the AC 100 course

The last year the AC concluded
in the famed Rose Bowl. Organizers had to move the
race in 1992 because of a Guns
N’ Roses concert.