Gleaning the Essence of Fastpacking

As my boyfriend, Andrew Charnock, a couple of friends and I crested the day’s last craggy hill … 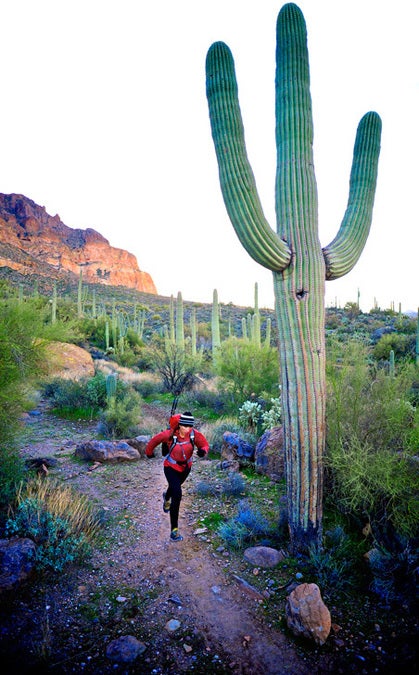 As my boyfriend, Andrew Charnock, a couple of friends and I crested the day’s last craggy hill, the sun swung low in the sky and torched the long grasses of Arizona’s Canelo Hills a hue of bronze. We’d been trotting a rollercoaster trail over grassy knolls, across streams and through pygmy woodlands since midday. Though our final destination was over 16 miles away, we took a moment to absorb our surroundings: a flat desert virtually devoid of human manipulation, studded with ragged mountains and glinting lakes.

Besides, there was no hurry. Our 10-pound packs were stuffed with everything we needed to spend a brisk January night in the wilderness. We set up our ultralight tents in a sandy wash ensconced in scrub oak, cooked dinner and sapped up the warmth of a campfire in the powerful silence of southern Arizona’s borderlands. Small armies of stars lit the sky before a nearly full moon rose heavy and lopsided in the southeast, washing our tents in silver light.

We were in the middle of a two-day trial run of the burgeoning sport of fastpacking on the newly minted Arizona Trail, a trip proposed by our zealous fastpacker friends Matt Hage, 36, and Agnes Stowe, 26. The Alaskan duo are multi-purpose outdoorspeople with a mission to pinpoint the most scenic locales for Matt’s photographs and to cram as many uber-adventures into their days as possible. Between Agnes’ stints working as a civil engineer, the couple has fastpacked hundreds of miles through wild Alaska, packrafted Class IV rapids in the country’s least visited national monument, the Aniakchak, and stared down grizzlies in defense of wild-caught salmon. Their hard-core nature and unbridled enthusiasm for physical challenges were the perfect antidote to Andrew’s and my tendencies toward sleeping in, lingering over pancakes and prolonged happy hours. It also made them the perfect tutors in ultralight backcountry travel.

“The point of going lighter is to be able to go farther, faster or to just enjoy yourself more,” Agnes told me. Fastpacking seemed a natural marriage of two of my favorite pastimes: backpacking and trail running. Still, before our trip, I wondered: Were they really that compatible? What would a night in the wilderness be without a few creature comforts? And how would trail running feel with the extra weight?

Fastpacking was born both by ultralight backpackers speeding up their paces and tackling greater distances as well as trail runners eager to prolong their jaunts in the wilderness with the help of overnight gear. The goal of both: a purer connection with nature by traveling long distances quickly through remote wilderness.

In the last decade, continual advances in ultralight gear have made it easier to carry less weight, considerably widening the sport’s appeal. It has also allowed fastpackers to lighten loads to jaw-dropping numbers: The sport’s most fanatical ounce-shavers now carry packs lighter than five pounds in the summer and 10 pounds in the winter, while traveling upwards of 40 miles each day.

Weeks before our trip, Andrew and I loaded up on as much ultralight gear as we could afford. Then, after spreading it all out at our campsite the day before our trip, Matt and Agnes helped nip the extraneous items: Wispy synthetic-insulated pullover, yes. Flask of Maker’s Mark, no. The result was a shockingly gossamer pack and the lightest overnight kit I had ever hoisted onto my back. This, I thought, was promising.

“Holy crap, I might actually enjoy carrying this,” said Andrew, after trying on his kit. Andrew, 34, thrives on adrenaline sports like skiing and mountain biking, but loathes backpacking. Occasionally he appeases me by joining a foray into the woods, and this gave me hope he could be converted.

“The thing about fastpacking is everything in your pack is multi-purpose,” Matt told me the next day as we cruised out of a sandy wash and up a rocky canyon. That night, we used our packs under our feet as sleeping pads and our running tights as long underwear. “And it’s more about dynamic comfort, not hanging around camp.”

He was right. Without a bunch of gear weighing me down, nor the mental prospect of hotfooting it back to a car before dark, the beauty of southern Arizona’s wilderness became distilled. Instead of focusing on my own discomforts, I absorbed my surroundings. We hoofed past deep-blue Parker Lake then people-free hills dotted with cactus and Huachuca yucca, with feather-duster-like flowers taller than scarecrows. We sped over buffed singletrack and down rocky hillsides as blissful 60-degree breezes cooled us. Above, wispy clouds swirled like cursive across a broad cobalt sky.

We chose our 30-mile section of the Arizona Trail between Parker Lake and the artsy town of Patagonia (pop. 881), within eyeshot of the Mexican border, for its variety and mild climate: In January, day temperatures hovered in the 60s and, at night, dipped to 15 degrees. The trail is also alluringly wild. Bears, mountain lions, bobcats and the occasional jaguar, North America’s largest cat, still roam this historic smuggling route, as well as elusive modern-day smugglers and immigrants.

But plenty of other sections of the Arizona Trail are also suited to fastpacking. Nearly complete, the trail winds some 800 miles from Mexico to the Utah border, through saguaro-studded desert, arid hills and stately ponderosa pine forests, not to mention the Superstition Mountains that soar into the sky east of Phoenix and the blowout finale: the Grand Canyon.

After our two-day trial run, Matt and Agnes fastpacked two other sections of the trail in southern Arizona: one through the White Canyon Wilderness and another through the Superstition Wilderness. They discovered wild diversity, from stretches of buffed, perfectly contoured singletrack to cactus bushwhacks, from towering saguaro forests to narrow sandstone slot canyons.

On our second day, we climbed a hill with views into Mexico, then passed through grasslands resembling the African savannah, populated by wide expanses of wispy bull grass and poetically placed junipers. Later, we dashed past iron-red cliffs rising from bucolic cow pastures, antique windmills creaking in the breeze and spooky forests of mesquite trees clawing the sky. We passed hidden sites where Native Americans etched symbols into the rocks, footpaths Apaches likely roamed and remote streams where native fish still flourish. Amid it all, we glimpsed only one other group of human beings.

There were plenty of signs of wildlife, however. In the afternoon, the four of us, climbing undulating hills in a meditative state of silence, heard a din in the trees. Broken from our reveries, we squinted into the brush then yabbered all at once. Andrew suggested cats, Matt thought raccoons, but after corroborating with the local visitor’s center, Agnes had it right: a family of ringtails—quick, fox-like creatures with long striped tails.

At about mile 29, I stood atop a steep hillside, ready to plunge downward to Patagonia, invisible beneath the cottonwoods some 1000 feet below. It was then that the point of fastpacking became clear. It wasn’t necessarily about the number of miles I ticked off or the speed at which I moved, but the fact that it was so much easier to immerse myself in the natural world. This, I realized, was likely only the beginning of my fastpacking journey. With that, I made my way down the long hillside with little else in my consciousness but the unearthly violet sunset overtaking the gin-clear Arizona sky.

Freelance writer Kate Siber is based in Durango, Colorado, where she can run up Animas Mountain right from her home and fastpack in the San Juan Mountains. Her work has appeared in Outside, National Geographic Adventure, Women’s Health and Men’s Journal. 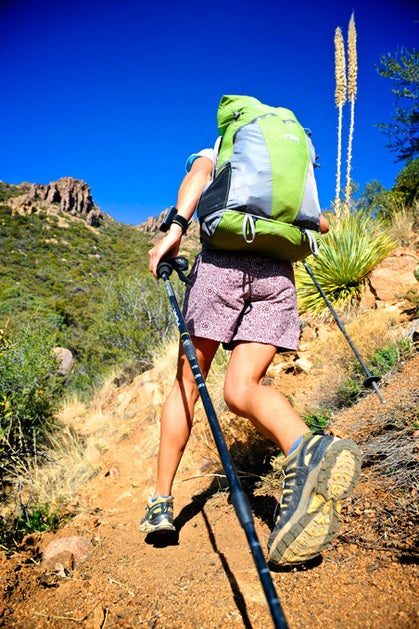 Demetri “Coup” Coupounas once carried a 65-pound pack on his wilderness forays. Now the founder of GoLite fastpacks with a five-pound kit and has ticked off the Colorado Trail, Vermont’s Long Trail and California’s John Muir Trail. “Yes, you’ve got to have the right gear, but also the right underlying knowledge and techniques and the right philosophy,” says the fastpacking guru.

The reward? Coup manages to squeeze 80 miles into a weekend, seeing more than most do in twice the amount of time. He offers the following tips to beginning fastpackers.

:: Cut the extras. The vast majority of your weight savings is not achieved with the lightest high-tech gear, rather from cutting out things you don’t need (e.g. multi-tool, spare clothes, towel, etc.) and then from the synergy from weight savings—if you have a light load, then you don’t need a fancy pack harness system or heavy hiking boots. Wearing trail runners and a light pack, you can go farther.

:: Think holistically. In the summer, I don’t take a stove, because I’m happy eating dried mangoes, nuts and jerky. But I get better sleep by toting a slightly heavier sleeping mattress, which pays for itself in energy the next day.

:: Move forward. You’re not necessarily going faster, you’re just going longer. I don’t stop much, just every few hours to get water. You don’t need to because you’re not tired; you’re having a great time. That’s how you cover 30 miles in a day with a pack.

:: Learn the techniques. I use a 10-ounce poncho for my raingear and shelter. If you know how to rig up a poncho, which is basically an 8-foot-by-10-foot rectangle, you can ride out storms with no problem. But that takes knowledge, skill and confidence. Practice in your backyard before going out with light gear.

:: Commit. A lot of people are conservative, but, by just committing, you learn tons. I’m not advocating that people try things they feel unsafe with. By diving off the deep end, you understand why moving through terrain that’s hundreds of miles between roads is so freeing.

The Gear Primer: Choose the right gear and know how to use it