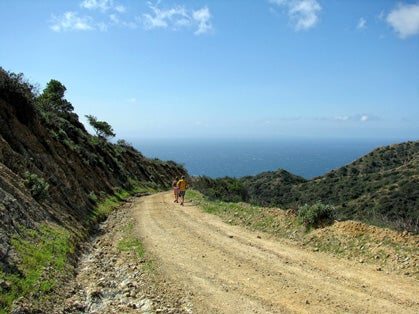 This article appeared in our January 2011 issue.

From encountering buffalo on the remote island course to post-race partying, this is one wild event.

There are a lot of reasons why six guys have raced the Catalina Marathon 32 consecutive times, not missing a single year since the race’s beginnings in 1978.

The course—23 miles on wide jeep roads and three miles on pavement—cuts across the interior of Catalina Island, 26 miles off the coast of California, providing epic ocean views and wildlife encounters as it climbs and descends wilderness most folks otherwise would never see. It’s a glimpse into what California might have looked like 150 years ago, with no houses, wild brush lands and varying ecosystems.

This race is logistically challenging, requiring early arrangements, or else, which might add to the proud-to-never-miss-it appeal. While the race organization doesn’t cap entries, and 700 to 800 runners race each year, the island’s hotel rooms fill up, and there’s only 600 seats on the race-day ferry to the starting line.

Competitors typically take a ferry from the California coast the day prior to the Saturday race, and stay in the small, picturesque town of Avalon. Roughly 200 runners choose to camp in tents or rustic cabins at the start in Two Harbors, or nab one of 10 rooms at the only hotel there. Those in Avalon hop on the chartered ferry at 4:15 a.m. on race morning to the start, and run the rugged 26.2 back to Avalon, which is where the party begins.

“It’s tradition that the winners sing karaoke that night,” says race director of 15 years, Jack Caress. “I think the only time people aren’t drinking all weekend is when they’re actually running the race.”

Runners take great pride in their Catalina tick list, as “year bars” are awarded to finishers, who string them on what are known as “Starter’s Pins.” “You’ll see people walking around town with them pinned to their hats or shirts,” says Caress, “like military medals of honor.”

“The Catalina Marathon is one of the few races that captures all of the runners (and families) and keeps them in one remote and beautiful location for a weekend, almost to the exclusion of outsiders,” says 59-year-old Bill McDermott of La Habra Heights, California, who hasn’t missed a race since its inception in 1978 and holds the course record. “The result is like a big reunion each year.”

And though the Catalina Marathon is a USATF-sanctioned race, it’s not a course where you’ll likely run a PR. “It’s really unique to break three hours,” says Caress. “Most people run five or six hours, but more people come across the line smiling than at most races.”

The race runs point-to-point from Two Harbors—a popular place to dock a boat and have a drink at the Banning House’s bar—to Avalon. The course starts at sea level, climbs 820 feet over the first two-and-a-half miles to West Summit for a short a series of ups and downs then plummets back to sea level at mile 8.2 at Little Harbor. The longest climb of the day is up Pump House Hill at mile 17.7.

At mile 18.6, the trail empties onto the paved airport road for a mile and a half. Around mile 20, where the Divided Trail hits the Avalon Trail, at 1570 feet, comes the highest point on the course and the best view. “You look west and see San Clemente Island,” says Caress. “Look east on a clear day and see the California skyline and Avalon down below.” From there, it’s five miles downhill.

The final mile and a half are on paved streets through Avalon, past Wrigley Memorial (Chicago’s Wrigley family owned Catalina before turning most of it over to the Catalina Conservancy) and to the finish.