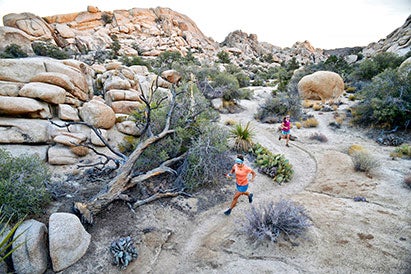 The mojave Desert has a subtle way of letting you know that you are hopelessly lost. In Joshua Tree’s nondescript washes and endless piles of rock, I find it takes a bit longer for that “this isn’t quite right” feeling to set in. Maybe that’s because on the surface, the desertscape appears benign and unchanging. Like a mirage, you see things as you want to see them. Then before you know it, after several wrong turns, you are lost.

Our own saga began just before dawn. The plan was a morning trail run along the well-established Pine City Trail for a couple of miles, then drop off trail into the namesake canyon, which would deposit us into a series of washes to the north. From there we would connect GPS way- points on a cross-country route that would lead us over a low pass to join the Desert Queen Mine Trail. This would take us right back to the trailhead and close the loop on an adventurous 10-miler. We planned to be out for a couple of hours, then enjoy a midday rest before an afternoon jaunt elsewhere in the park. That was the plan anyway.

Our trio had traveled to the desert Southwest to escape the autumn doldrums of south-central Alaska. Avid Alaska-type and friend Natalie Osborne had joined my wife, Agnes, and me, seeking sun. Average recreationalists, all three of us do a lot of things well but don’t excel at any one sport. Nobody was looking to break any PRs on this trip. We had set aside several weeks in Joshua Tree National Park, an 800,000-acre desert wilderness in Southern California near Palm Springs and the Salton Sea.

“J Tree” is a one-of-a-kind landscape composed mostly of boulder-heap islands floating in a sea of the area’s namesake yucca tree, which can only be described as Seussian. The good doctor could have easily found inspiration for his tale of the Lorax from a visit here. The park is a sort of mecca for rock climbers, who travel from around the world for the clean faces and splitter cracks that grace the 100-or-so-foot quartz monzonite rock formations. Joshua Tree also hosts a network of trails and routes that mostly follow washes and occasionally crest a low pass. The topography keeps the grade mild on most trails.

Arriving in the tiny one-intersection town of Joshua Tree was a welcome break from the monotonous desert suburbs sprawling east from Los Angeles. We turned onto the final stretch into the park, pointing our rental car south into a brilliant sunset. The road rolled through a dusty neighbor- hood of earth-toned homes nestled among boulder-strewn hills. It was dark by the time we arrived at Ryan Campground, and a full moon illuminated the surreal surroundings as we set up camp. An island of rock made up the campground’s centerpiece; in the distance sat The Headstone, a stack of giant blocks that look like they could tip over with a gentle nudge. Everyone was quick to bed after the long day of travel. Within minutes the resident coyotes began their sorrowful chorus just yards from our tents.

Early November would prove to be the perfect time for running and climbing in the park—70 degrees and sunny nearly every day. The next morning, we started off the loop trail around Lost Horse Mountain, a moderate seven-miler with one steep climb. On the way up, all the way to the horizon, jumbled granite domes appeared afloat in a vast sea of Joshua trees. After cresting a steep pass, the trail twisted its way down through remnants of May’s Lost Horse Fire, the hillsides scorched black with 450 acres of burnt yucca.

The sun was high after our morning run and the temps rose fast. It was time to head into town for a midday break. By 10 o’clock our crew was enjoying a late breakfast and strong coffee at the Crossroads Café in the small town of Joshua Tree. Consisting of 10 blocks lining the highway between Yucca Valley and Twentynine Palms, it’s one of those don’t- blink-or-you’ll-miss-it towns. Nevertheless, this enclave is chock full of cafes, restaurants and galleries that wear the creativity of their owners on the storefronts. Nobody seemed to be in a hurry. Maybe there’s something about the surrounding desertscape that exudes a calm, patient vibe. 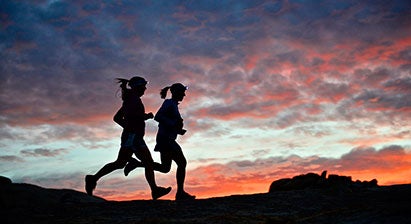 Running into the sunset on the Wonderland Wash Trail.

For the next couple of days our routine involved a morning trail run, a late breakfast, a midday siesta and then another trail run in the early evening. Mostly, we stuck to the established trails, but one day we became inspired to venture off the beaten path. From the description in a trail guide, connecting the Pine City and Desert Queen trails sounded like a good adventure.

Sunrise bathed the trail in pure gold as we ran the gentle climb to the old Pine City mining site, which is now merely a landmark with no evidence of a mining operation. From there, the marked path made a steep descent into Pine City Canyon. This section was more scrambling around short rocky drops than running, but soon opened up into a wash.

Our trio reset the pace while searching out the firm ground in the sandy sections. It was a little over an hour later that we became … uh … confused. Inconspicuous “valleys” separated by 40-foot-high piles of boulders shot off in every direction. Coming from the mountains of Alaska, where topography is measured in 1000-foot increments, we had trouble matching up such minute features with our topo map. The lack of contour lines was almost comical.

After several wrong turns and much backtracking, we picked our way through a boulder labyrinth on what we were sure was a shortcut back to the car. A dusty, bloody and thirsty six hours after our predawn start, we finally spotted the trailhead.

By one o’clock we were scarfing cheeseburgers and beers at the Joshua Tree Saloon, perplexed at how we had become so lost. It took several rounds to finally figure it out: We had obviously been caught in a vortex.

After our Pine City Canyon adventure, we avoided any trails or routes with the word “canyon” in them. Second to the maintained trails, the best features to run in the park are the washes, which typically feature firm gravel footing and a guaranteed easy gradient.

A stellar example is the 8.5-mile Porcupine Wash Loop through twisting narrows in the Hexie Mountains. Another favorite was the Wonderland Wash, which acts as a gateway into the Wonderland of Rocks, a maze of granite boulders, slabs and domes. One full-moon evening we headed out to the Wonderland’s Astrodome area for a five-miler that included a lot of running over rock slabs. 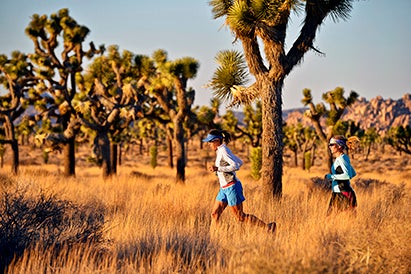 Hage and Osborn on the moderately difficult California Riding and Hiking Trail near the Juniper Flats Trailhead and Ryan Campground.

On our final day we ran a section of the California Riding and Hiking Trail (CRHT), from Covington Flats to Keys View Road. The CRHT is J Tree’s high-liner trail that traverses most of the park’s western half. The 15-mile point-to-point section requires a car shuttle, which added to the commitment level. Even though the CRHT is reputed to be well marked and maintained, we would be running its least-visited section and traversing a good chunk of Joshua Tree. The night before, we packed for an all-day outing, filling hydration bladders and bringing extra energy bars. A storm moved in overnight, with dark morning skies adding to the day’s drama.

A soft, sandy trail made a gradual ascent to a low pass more thuggish than it needed to be. All complaints were quieted when we looked out from the saddle’s crest just in time to watch golden morning light wash over the desert all the way to the paltry waters of the Salton Sea.

The trail bed firmed up as it roller coastered over a series of ridges. Below us spread a vast hidden enclave of Joshua trees, all reaching up to the low clouds hanging with moisture. We charged down into the bristly forest with renewed enthusiasm.

A final switchback climb took us to our highpoint, then we coasted the last five miles to Keys View, enjoying the simplicity of moving quickly across an amazing landscape.

Matt and Agnes Hage scheme up adventures around the world from their home in Anchorage, Alaska.