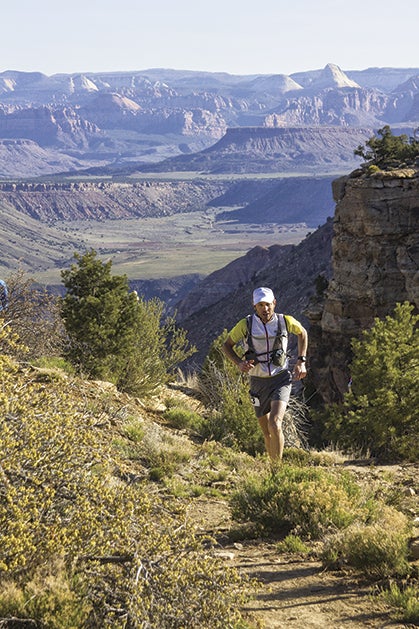 Race Director Matt Gunn puts it this way: “If you have even the slightest hint of a desert rat in your blood, then this run is for you.” He’s referring to the Zion 100 Trail Run, a grueling, mid-April event that he founded in 2012. The idea behind the race is to showcase Southwest Utah’s world-famous canyon country, but a geologic tour comes at a price—namely, relentless sun, gouging cacti and the occasional rattlesnake underfoot.

The race begins at a grassy park in the little town of Virgin—a 15-minute drive west of the entrance to Zion National Park—and ends at the same spot 100 hard miles later. (There are also 100K and 50K options.) The course is a single large loop composed of smaller loops and the occasional out-and-back; it’s a well-marked maze of slickrock singletracks and red-dirt roads, the occasional boulder scramble and a crossing of the Virgin River thrown in for good measure. Runners ascend nearly 11,000 feet as they tick off five juniper-spotted mesas, each rugged, remote and huge. Conditions can vary from 90-degree heat to snow flurries. And did I mention rattlesnakes?

A Sequence of Hardships

Kirt Moret, 59, a native of foggy San Francisco, is most decidedly not a desert rat. He is a committed ultrarunner, though, so when he won entry to the Zion 100 at a charity raffle, there was nothing to do but buy a plane ticket to Las Vegas, rent a car and give it hell.

Turns out it was the course that gave him hell. “I just happened to be assigned bib number 100,” says Moret. “My friends thought it was a sign that I was bound for glory.” He chuckles. “The minute they said that, I knew I was jinxed.”

After slogging through a 1,200-foot climb at mile 18, Moret traced the edge of Gooseberry Mesa out to the exposed Gooseberry Point, a dramatic spot with sheer walls dropping away for hundreds of feet on all sides. So far, so good: a cool morning, friendly volunteers, scenery to make a city boy jump for joy. Then Moret kicked a cactus. “I pulled my sock off and there were needles between my toes!”

The cactus incident was only the beginning of a long series of tribulations that included vicious heat, fierce climbs and three bouts of nausea. The sun went down before Moret reached a crucial drop bag, forcing him into the inky darkness with only a T-shirt and light jacket. When he reached Guacamole Aid Station, at mile 67, he was shivering so badly he couldn’t get a cup of coffee to his lips without spilling the whole thing.

Was it worth it?

“Hell, yes!” Moret says. “I got to see two desert sunrises. And the stars that night were the brightest of my life.”

The Zion 100 doesn’t actually go inside Zion National Park, the hub for Southern Utah’s climbing and canyoneering communities. Rather, it loops and twists through the convoluted topography just outside the park boundary, calendar-worthy views of towering white domes and smooth orange walls cropping up every mile. Larisa Dannis, a racer from New Hampshire, describes the terrain as “dusty, shadeless and punishing.”

At mile 49 racers climb a historic wagon trail established in the late 1800s by Mormon pioneers. Later they run past a cemetery with wind-worn tombstones, where one epitaph reads: “Killed by Indians.” (Scenes from Butch Cassidy and the Sundance Kid were filmed in Grafton, a nearby ghost town.) Grazing cattle moo from behind rickety fences and turkey vultures circle ominously.

It’s said that the vast majority of people who visit national parks don’t ever leave their air-conditioned cars; accordingly, the masses get stuck with a homogenized, canned experience.

Running the Zion 100 is an opportunity to break out of that can and kick it down the trail, an invitation to meet the real thing—a sublime corner of the American Southwest edged with danger, laced with history and bursting with raw elements—on your own two legs.

What do those raw elements feel like, smell like, taste like? You’ll have to let your inner desert rat out of its cage in order to find out. But beware: Once they’re free, those rats do like to run.

The 2014 Zion 100 Trail Run will be held on April 4-5. There’s a 32-hour cutoff for 100-milers and a 20 hours for 100K runners. Prizes include handcrafted belt buckles made from materials gathered on the course such as juniper twigs and sandstone chips.

> Getting There: The Saint George airport is 45 minutes from Virgin, but most folks will probably want to fly to Las Vegas and rent a car. The drive from “Sin City” to Virgin takes about two hours and passes through the Virgin River Gorge, one of a dozen geologic wonders en route.

> Accommodations: Virgin is located between Hurricane (pronounced “herkin” by the locals) and Springdale. Race organizers recommend The Cable Mountain Lodge in Springdale (10-percent discount for competitors) because it’s a two-minute walk to the national-park entrance. There are also plenty of opportunities to camp in the area—on BLM land, it’s free!

> Food: In Springdale you can get grass-fed beef and free-range chicken at Oscars Café, or sweet-potato tamales and chili verde at the Bit and Spur Saloon. The Zion Brewing Co. serves the only fresh draft beer in all of southern Utah—and the views aren’t too shabby either.

> Other Attractions: If you can muster the energy, head into Zion Canyon for a five-mile round-trip hike up Angel’s Landing. Bryce Canyon and the Grand Canyon are both only a few hours away. Mountain biking, rock climbing, backcountry camping, canyoneering, wildlife watching—the recreational opportunities are endless.

This article was originally published in our March 2014 issue.