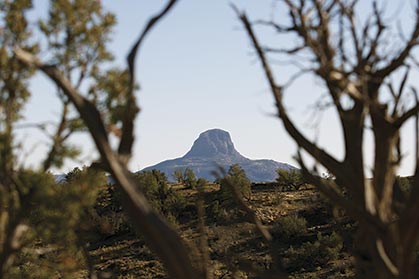 The volcanic plug of El Cabezon dominates the horizon. Photo by Sarah Jackson.

October is a month for running. The soft autumn light turns landscapes buttery and sets trees aglow; the frozen dirt and patina of colors crunch underfoot; a cool wind clears the mind. But in the high country of Colorado, where I live, even running can lose its luster, with trails already under snow and mountain shadows calling for layers of clothing.

It is then that we pine for another physical and spiritual dimension. We dream of running half naked, with too many miles of dry singletrack to cover in, possibly, a lifetime. We dream of a long day in the desert, far away, where we can meditate on geology, and suffer, and come back punch-drunk happy. Somewhere like New Mexico …
The New Mexico Allure, Small-Race Appeal

The course description for the Deadman Peaks Ultra uses the words “desolate” and “beautiful,” and this is the race’s allure. Tracing a section of the Continental Divide Trail (CDT) that is rarely travelled, it highlights a landscape of high-desert mesas, volcanic plugs and badlands that has famously inspired artists.

The 2012 race began under a vast, starry sky. I recall waiting for the start with other runners and “Wow!”ing as one shooting star after another flashed overhead. Be prepared for an hour of darkness. Not realizing just how dark it would be, or for how long, I made the mistake of grabbing a headlamp with low batteries out of my glovebox. I ended up stumbling down and up washes, unable to see where my feet were going on the overgrown trail, until a fellow racer, David Coblentz of Los Alamos, New Mexico, came along and shared his light. This friendly vibe among runners is part of the small race’s appeal.

After the first climb, runners top out onto the rim of an escarpment, just in time to catch the sunrise. They pass through ponderosa pine forests, over several miles of slickrock with natural hexagonal patterns, and across a plain of cholla cactus, all the while heading toward El Cabezon, a volcanic plug that dominates the horizon. Out there, racers have hours to contemplate all those who have come that way before—the ancestral Puebloans, Apaches, Navajos and Spanish—whose descendants still inhabit the region. Apart from requiring some scrambling up and down a mesa, the course is entirely runnable with generally easy footing and well-spaced, well-stocked aid stations.

The event takes its name from the two Deadman Peaks, which runners pass between around mile 20, outbound. Per local lore, a man once died there. Since it is a late-October race, a Day of the Dead theme pervades, and race organizers find imaginative ways to interpret it, particularly with their handmade, sequined-animal-skull trophies.

Part of the appeal of Deadman Peaks is that it is a race with a conscience. Besides the usual awards for top finishers, organizers offer a Trash Award, for competitors who pick up the most pieces of litter, tallied at each aid station. Though I didn’t notice more than a few gel tabs on the trail, some runners finished the last three miles toting abandoned truck tires.

In 2013, the fourth year of the ultra-distance race, organizers added a marathon, plus a 10K and a 5K run/walk, each on the CDT as well. All race proceeds benefit the Pancreatic Cancer Action Network.

The post-race fare at the finish, free to all runners, their families and crews, is reason enough to run one of the races: the homemade enchiladas and posole, with burgers and beer are just rewards for your efforts on the trail.

Cuba’s population totals 740, and finding lodging can be a challenge. Many runners camp at the start, an austere dirt parking lot where temperatures can get down into the 20s at night, but nobody seems to mind. After all, this is the West, not the Waldorf. 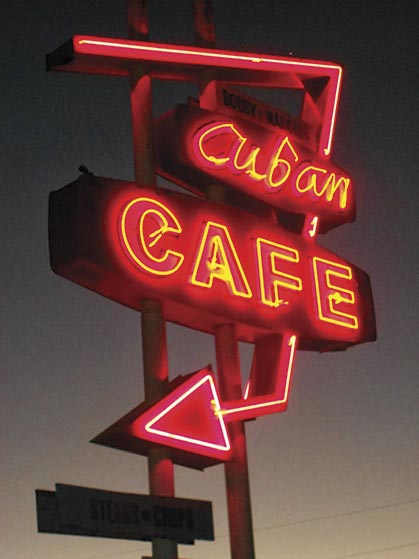 >Non-running activities
Approximately 70 miles west of Cuba is Chaco Culture National Historical Park, a center for thousands of the ancestral-Puebloan people between 850 A.D. and 1250 A.D., and a cultural wonder where ceremonies and trade occurred on a grand scale. Hike or bike for nine miles of Pueblo sites and petroglyphs.
nps.gov/chcu/index.htm

El Morro National Monument, 135 miles south of Chaco Canyon, was a year-round water source at the base of a headland. Today the monument is famous for its 1,000-year-old Native American carvings, 500-year-old Spanish carvings and 150-year-old pioneer carvings.
nps.gov/elmo/index.htm

About 60 miles southwest of Cuba, Jemez Springs promises a relaxing post-race soak in natural hot springs. On the way, indulge in fry bread and traditional Puebloan food at outdoor stalls below red sandstone cliffs in the Jemez Pueblo and stop at the Jemez Monument Historic Site.
nmhistoricsites.org/jemez

Other Trails and Races in Northern New Mexico

San Pedro Parks Wilderness, accessible from the Circle A Ranch or San Gregorio Lake, about 13 miles from Cuba, with over 30 miles of trails across meadows, streams and rolling mountaintops. jemezmountaintrail.org/San_Pedro_Wilderness.html

For more information and to register for the 2014 Deadman Peaks events, visit www.dp50.org.