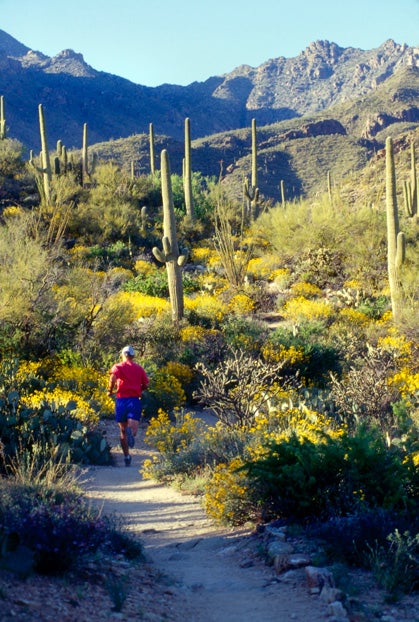 Go if you want to run in a desert surrounded with views of the Tucson, Santa Catalina, Rincon, Tortolita and Santa Rita mountains, or run through the mountains overlooking the desert and lively city of Tucson, situated at 2389 feet. “Running past rock features and desert cacti, you feel like a cowboy in the Wild West,” says Randy Accetta, president of the Southern Arizona Roadrunners.

A dusty Spanish frontier settlement founded in 1775, Tucson is now a college town with one million people. Despite the city’s metropolitan feel, the surrounding desert environment can be dangerous. Beware sun-baking rattlesnakes or prickly cacti. And unless you thrive in scorching sunshine like local Pam Reed—former women’s course-record holder at the Badwater Ultramarathon in Death Valley—run early and enjoy the city’s good eats and sights the remainder of the day.

Race … February’s popular Fleet Feet Arizona Trail Race (fleetfeettucson.com) follows part of the Arizona Trail, which spans the state. After completing the 5.5- or 11-mile Catalina State Park Trail Race (everyoneruns.net), held in April and in September, chow down on warm breakfast burritos and fresh-fruit smoothies and peruse the park’s wildlife exhibit including live owls, lizards, snakes and other creatures.

Best Trails … Western movie fans can run Tucson Mountain Park’s Starr Pass Trail to a movie set where many old and recent Westerns have been filmed, including Gunfight at the O.K. Corral and Tombstone. In northeast Tucson, the Catalina Mountains are home to Sabino Canyon (sabinocanyon.org), where you can ascend 7000 feet on several hilly singletrack dwarfed by towering canyon walls. Saguaro National Park East’s (nps.gov/sagu) 128 miles of trails range from flat desert (such as the Cactus Forest Trail), where you’ll run past scrubs, sea-urchin-like cholla cactus and gigantic saguaro cacti, to mountainous singletrack in the Rincon Mountains. “The terrain is rocky, harsh and summer heat makes it very demanding,” says Accetta. Locals love Catalina State Park (pr.state.az.us) on the city’s edge, where four main trails split from the trailhead, providing miles of rolling sandy trails.

Go when … Trails are snow-free all year round, and spring and fall are typically a pleasant 70 or 80 degrees, but temps shoot up to nearly 120 in summer. You’ll find cooler temperatures and great trails from the summit of 9000-foot Mount Lemmon, an hour north of Tucson.

Best eats … Bob Dobbs Bar and Grill (bobdobbs.net) on 6th Street serves double-patty Bob Hamburgers smeared with garlic and Worcestershire sauce—bring breath mints! And don’t leave until you carve your name on the wooden table. A heart-healthier breakfast option is Blue Willow Restaurant and Bakery (bluewillowtucson.com), where you can enjoy tofu, mushroom and spinach scramble.

Pitstop … The Running Shop (runningshopaz.com), Tucson’s oldest running store, opened its doors 27 years ago and is a favorite among local runners for gear and networking.

Sleep … Bed and Bagels of Tucson (bedandbagels.com) is less than eight miles from both Saguaro National Park East and Sabino Canyon. The rooms ($90 and up) feature eclectic art from the owner’s extensive world travels. Fido can even stay for a small fee. Step back in time at the historic Hotel Congress (hotelcongress.com) in the heart of Tucson. Built in 1919, rooms have wrought-iron beds, and retro-style phones wired to an antique switchboard. Rooms are $69 to $119 a night.

Trail Running Gear You Can’t Live Without – As Selected By You!