Running in the (Other) Mile-High City 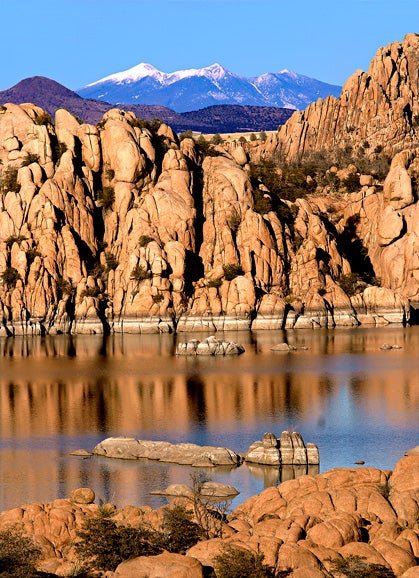 Go if … you want to escape the heat and run amid towering granite rock formations and desert peaks on great trails. While many flock to Flagstaff’s famous trails, the hoards have yet to discover Prescott’s hidden gems, which surround the town of 43,000 nestled at the foot of the Bradshaw Mountains in west-central Arizona.

“Most people don’t think of Prescott when they think of trail towns,” said Mike Zengel, owner of Swift Feet running store. “But we have great trails with sandy terrain and few rocks, and they are isolated so you don’t see many people.” The Granite Mountain Wilderness is minutes from downtown and the Prescott National Forest has more than 450 miles of recreational trails across 1.25-million acres. To run with the locals, head out with the Mountain Milers (mountainmilers.com), a running club that hits the Prescott Peavine National Recreation trail every Wednesday.

The popular Prescott Peavine National Recreation Trail is a five-mile, mostly flat trail with views of Watson Lake and the oddly shaped boulders of Granite Dells. Willow Lake Trail, which starts eight miles outside town, is a seven-mile shoreline loop. And to escape Prescott’s heat (which can reach the high 90s), head to the Goldwater Lake Trail, 4.4 miles of singletrack among shady ponderosa pines.

In Prescott National Forest, the popular two-mile Thumb Butte Loop Trail climbs 600 feet from pine forests to scrubby forests of oak, juniper and manzanita. The trail looks over the city and Bradshaw, Sierra Prieta, Granite and Mingus mountains and as far as the San Francisco Peaks. At the Granite Basin Recreational area, Granite Mountain Trail is a five-mile stretch of sandy singletrack surrounded by junipers and pines. Follow it to a viewpoint overlooking Granite Basin and Sierra Prieta.

Race May’s Whiskey Row Marathon & Half Marathon, 10K and 2-Mile Fun Run (prescottymca.org) is considered one of the country’s toughest marathons. “The course is constantly going up and down hills,” says Zengel. “You just expect your time to be at least 30 minutes slower than other marathons.” Held in the Prescott National Forest, the rugged out-and-back course on paved and dirt roads starts at 5280 feet and ascends to 7000 feet over the first 10 miles.

Think you can outrun a horse? Find out at October’s Man Against Horse race (managainsthorse.com), which pits runners against horses over either 12, 25 or 50 miles along steep trails and gravel roads through the Mingus Mountains’ pine forests. Despite the fact that horses break for mandatory vet checks during the race, this event’s four-legged competitors have prevailed the last two years. The Gheral Brownlow Memorial 10K and 2-Mile Fun Run is held in memory of the local runner who co-founded the Whiskey Row Marathon and Man Against Horse race. “The race is 100 percent trails, zero shade and held during the hottest time of year,” says Ken Ekman, founder of the Mountain Milers.

> Go when “Running is best from October to the end of November, after September’s monsoon season,” says Zengel. Snow never sticks around for long this time of year, and morning temperatures are an agreeable 60 to 70 degrees.

> Pitstop Swift Feet (swiftfeetaz.com) is a specialty running store that offers stride analysis on its in-store treadmill and a wide selection of running apparel, footwear, insoles and hydration systems.

> Resources The City of Prescott (cityofprescott.net) has extensive information on area trails, including maps, trailhead directions and distances. The U.S. Forest Service (fs.fed.us/r3/prescott) also has descriptions of trails in Prescott National Forest.