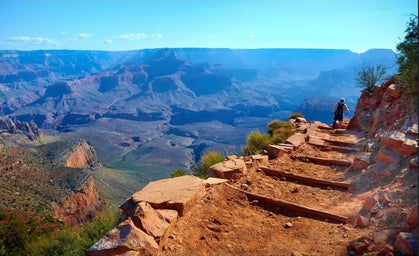 The Grand Canyon has never been a more popular destination for trail runners.

Crossing from the Canyon’s south rim to its north rim—or for more ambitious types, there and back again—is a challenge that draws many of the roughly 15,000 people who visit the Canyon’s corridor (where the rim-to-rim route runs) each year, and that number is growing. The mystique of recent speed records for the rim-to-rim-to-rim routes, as well as the challenge and beauty of the low desert, has ensured an increasing number of that swelling visitor log is filled with runners.

But according to reports, the number of visitors—including runners—along the corridor route could soon be restricted.

“Right now, there are up to 800 people in the inner canyon on a given day, which is a lot for the limited facilities there,” she says. “Some of it is general crowding at sites like Phantom Ranch, or the restrooms. But some of it is an increase in litter, including human waste on the trail.”

Bennett also says several instances of poor trail etiquette by runners and hikers on crowded trails has been reported.

She says the new Backcountry Management Plan, which is in its draft stages, may address some of these concerns. But she stresses that the plan is not complete, and that public input will be a large part of what is considered for the final draft. At the moment, permits are only required for overnight use of the park’s backcountry.

“We have a 1.1-million-acre backcountry that this plan will address, and the corridor is such a small part of that,” Bennett says. “But the corridor is so high-use that it will be a popular topic … rim-to-rim activity is a small topic, but it will be of interest to a lot of people.

“With this planning process, there’s a fear that we’re limiting access, but we want to understand what’s going on before we would place any limits on anybody,” she continues.

Trail runners and the public at large will have between 60 and 90 days to weigh in on proposed changes once a draft of the plan’s Environmental Impact Statement (EIS) is released. The draft as well as a link to the National Park Service’s Planning, Environment and Public Comment website will be posted on GCNP’s website. Runners can also visit the Backcountry Management Plan website for more information or to contact park officials with questions or concerns.

There will also be public meetings held to address questions and comments during the open comment period.

Bennett says that following the public comment period comments will be analyzed and substantive issues in the EIS will be addressed before a final version is released to the public.

Reflecting on Sobriety Between the Grand Canyon’s Rims