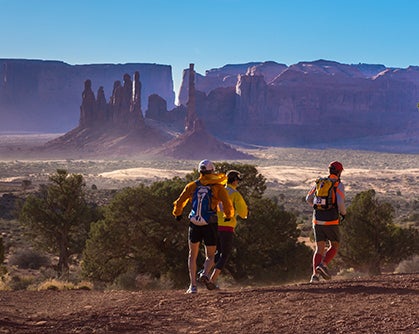 As we shivered in the predawn stillness, a Navajo elder blessed the dawn, offering thanks for a new day. A young man blew four sharp hoots on his wooden flute as the elder offered corn pollen to each of the four directions: east, south, west, and, last, north, as the dawn burned yellow over the blackened lip of the horizon.

Then, one by one, each Monument Valley 50 runner released a pinch of corn pollen to honor this day and our vitality, and we sailed down a red sand dune into the desert expanse below.

The Monument Valley 50-Mile and 50K in southern Utah is the brainchild of Matt Gunn of Ultra Adventures, which also puts on the Antelope Canyon 50-Mile/50K in Arizona, the Zion 100-Mile/100K/50K in Utah, the Grand Canyon 100-Mile/50-Mile and Bryce 100-Mile/50-Mile/50K in Utah. On the Colorado Plateau within the Navajo Nation Reservation, Monument Valley is a striking high-desert region sprinkled with red-sandstone buttes and slender spires, including the soaring Mittens and Totem Pole.

We began in silence—each step softened by the rolling hills of packed sand. Stark, etched towers surrounding us shifted from purple to brick red as the sun rose higher.

We were running on Navajo land, trusted with the privilege to explore a world that is usually off-limits to tourists unaccompanied by a Navajo guide. We savored the peace of the first five miles, past Left Mitten, to the aid station. 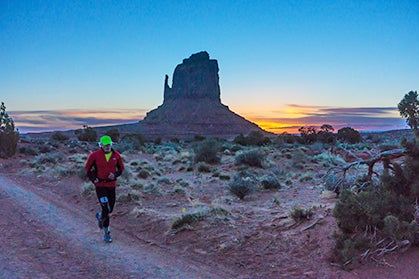 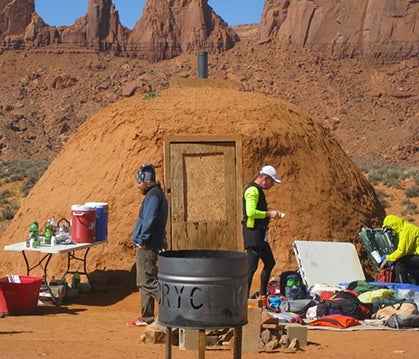 This aid station was hosted by a Navajo family outside of their hogan, a traditional Navajo dwelling. Photo by Caroline Hicks.

This single aid station would support us after each of several varying-length loops through the desert. Due to the forecast winds, we were permitted to use the hogan (traditional Navajo dwelling) of the Navajo family who was hosting the aid station. In this wood-framed, clay-coated dome, runners sipped mutton or veggie stew, and munched on fry bread and conventional aid-station fare, while enjoying the humor and hospitality of the host family and volunteers.

The first loop delivered a combination of fire road and cactus-framed singletrack. We circled sandstone buttes and slender towers rising from green platforms, under an impossibly blue sky. Around 11 a.m., the winds awoke. From a distance, the ensuing sand clouds looked surreal and serene—puffs of smoke dancing across an expanse. Then it hit—a thousand needles roaring against my bare face and legs. Occasionally, wind gusts would slam us, but more often, we plowed forward against sustained stretches of screaming, sand-laden wind.

On the way back to the aid station, a herd of horses came galloping through the open plane, across my path, halting in front of a distant paddock gate. 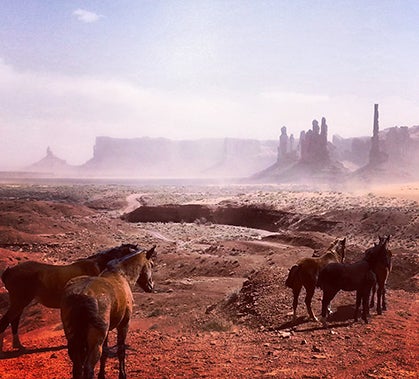 “Are they returning for their breakfast?” I called out to a man nearby. “Nope. We let them out every morning to get their exercise—they like it.”

Back at the aid station, only two brave volunteers remained, bundled from top to bottom outside the hogan. I pried open the heavy door, whooshing dust and wind over those gathered inside.

Ready to head out for the fourth loop of his 50-miler was San Francisco Bay Area running legend Errol “The Rocket” Jones.

“I promised I wouldn’t complain,” said Jones, “so I’m just going to make an observation. That is an awful lot of wind and sand out there, and it makes for one tough course.”

Loop two, dubbed “Arches Loop,” brought the toughest running yet. We crossed long stretches of deep sand and deep dunes before reaching the Big Hogan, a dome of red rock crowned with a hole that shines a bright sun spot on the wall below. This is a sacred site to the Navajo. When seen from below, the hole is the eye of an eagle head and the arch of the dome forms its beak and head. 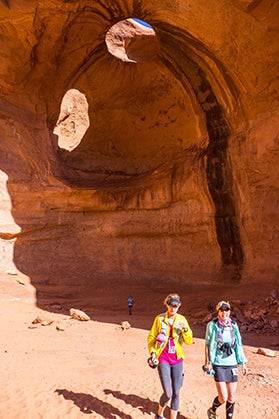 As I ran to the foot of this monument, a young Navajo guide leading two tourists invited me to witness a song. His chant and drum beat reverberated on the streaked domed walls above—delivering chills despite the afternoon heat. After thanking him for the honor of witnessing this ceremony, I proceeded on past Ear of the Wind, a red arch stationed high above the desert floor, and headed back to the aid station again.

The third section would be the best part of the race—a 1,500-foot-in-a-mile climb to the top of Mitchell Mesa, which offered views of the entire Monument Valley. This “loop” was an out and back, offering the chance to greet fellow runners.

“How was it up there?” I asked several runners returning from the mesa top.

“The winds nearly blew me off the Mesa!” called one strong young woman.

“That climb and that view? The highlight of the course,” said a vibrant, elderly runner.

“What about the wind?”

“Very refreshing! Cools you off! You’ll love it!”

After a tricky, steep climb, I leaned into the wind and crested Mitchell Mesa. Twisted black trees grew from cream colored, hard-packed earth laced with green sage brush. The “monuments” lay far below, all visible at once. It was hard to believe that this place of beauty was the site of an ore mine in the 1960s. We ran for a mile along the rim of the Mesa, with two mounted rangers—watching over us, one silent and stoic, the other chatting on a cell phone. Fifty-mile runners would re-trace their steps in reverse over the previous two loops, and 55K runners would head back to the start/finish line.

At the finish, all runners were awarded handmade beaded necklaces of their choice. The artist who made the necklaces offered each finisher a freshly fried taco. Overall and age-group winners were gifted Navajo crafts, including dream catchers, arrows and beaded pouches.

The gift of the day, however, was the journey—the privilege of being invited into a magnificent landscape, the victory of pressing forward through sand and wind to each breathtaking view.

As I gushed about my experience to race volunteer Rick Whitelaw, he replied, “Matt (Gunn) is a course-design artist.” With Gunn’s ability to weave together adventure, culture and hidden gems in a wild place, I heartily agreed.