Appalachian Commonwealth gets its own rugged hundo 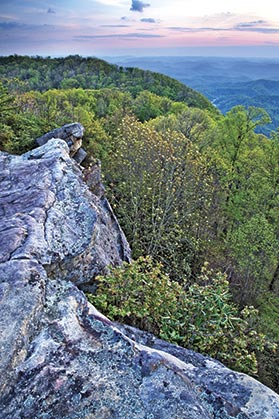 During the days of prohibition, in the dense, remote woods that straddle the border between Kentucky and Virginia, moonshiners hid their stills, running them back and forth over the state line to avoid apprehension. Over a century later, evidence remains along the 110-mile Pine Mountain Scenic Trail—the foundations of the early settlers’ humble mountain cabins, the remnants of wagons and even grave markers buried deep in the woods.

This year, the mountain and its mysterious past will see a very different kind of running. On October 4-5, the Pine Mountain region will host the inaugural Cloudsplitter 100, offering participants the option to run 25K, 50K, 100K or the keynote 100 miles. Not only has USA Track and Field (USATF) named it as a sanctioned event, Cloudsplitter will also serve as the USATF Mountain/Ultra/Trail Championships for the Commonwealth of Kentucky.

Susan Howell, Cloudsplitter’s race director, has a background in triathlons and long-distance cycling, but took one look at Pine Mountain and said, “We’ve got to try to do something here, because it’s so spectacular.” The mountain lies blanketed in a thick, green tapestry of flora.  Beds of brightly colored flowers and ferns make you feel like you’ve stepped back into a lost world.

Howell says she got the idea to put on a 100-miler after hearing others talk about traveling across the country to run ultramarathons like the Leadville Trail 100. Living just a three-and-a-half hour drive northwest of the mountain, near Louisville, Howell has noticed that many outsiders (and even Kentucky residents from other areas) have negative views of the region and its locals. Uneducated, impoverished, barefoot, moonshine-drinking mountain people has long been the typecast. While the area does have economic struggles, Howell says the stereotypes are unfounded.

“Those opinions are quickly dissipating as I talk with people about the region and the race, and experience the friendliness of the residents who live here,” she says. “The cultural stereotypes are being lifted.”

The out-and-back race will start and finish in Elkhorn City, a small mountain town of about 1,000 residents that sits on the banks of the raging Russell Fork River. Runners start with several thousand feet of vertical gain over six miles as they climb to the craggy ridgeline of the 3,273-foot Pine Mountain.

As they crisscross the ridge, runners will be rewarded with unobstructed views of Kentucky, Virginia, West Virginia and Tennessee as well as waterfalls, caves and limestone boulders standing two to three stories tall. Wildlife that calls the mountain home includes wild turkeys, deer and black bears.

The race course seesaws across the mountain, climbing to peaks stretching into the clouds and descending to gaps between the giants, where runners will experience the race’s precious little flat terrain. Bare, exposed rock outcroppings scattered along the way provide dizzying views.

North Carolinian Adam Herzog has been coming to Pine Mountain for years as a whitewater kayaker, but will approach it this year as an ultrarunner.  “Pine Mountain is off-the-beaten-path by southeast standards,” says Herzog. “I’m scared as hell of the distance and the 20K of climbing!”

Part of the excitement is the trail’s sheer remoteness. According to Howell, while the route will be well marked, runners can expect to encounter thick undergrowth, blowdowns and steep, rocky sections. In its 110 miles, the PMT crosses only six roads.

“[The lack of access] has definitely created a challenge resupplying two of the aid stations,” says Howell.  “We’re bringing mules and horses to stock them. ATVs will be used for the other stations.”

The finish-line celebration will feature a distinctly Appalachia theme with local music from pickers playing banjos, mandolins and guitars as well as storytellers recalling old mountain tales and folklore.