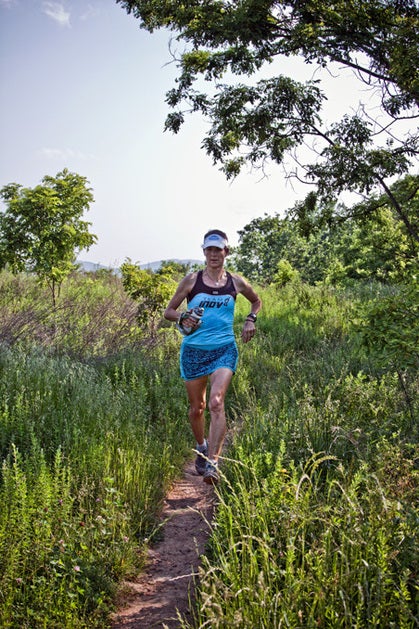 Charlottesville is nestled in the foothills of Central Virginia’s Blue Ridge Mountains, where rolling foothills blend into the cascading mountaintops of Shenandoah National Park. The town is home to the University of Virginia (UVA), a diverse mix of talented trail runners and endless miles of singletrack.

Charlottesville resident, John Holden, 66, has spent the past 28 years running in-town trails, which he says sets Charlottesville apart from other trail-running communities. “You can enjoy an amazing run, without driving to trailheads, on 100-percent trail with no road crossings,” says Holden. The Rivanna Trail is a prime example. Accessible from various trailhead junctions around town, the trail passes through the Rivanna River Watershed, connecting in an 18-plus-mile loop of singletrack.

Greenberry’s Coffee and Tea, located downtown, 100 yards from the Rivanna Trail in the Barracks Road Shopping Center, is a common meeting place for runners. “Baristas know runners by name,” says Sophie Speidel, a trail runner and UVA alumnus. “The hot drinks and breakfast plates are good, too.” Speidel is a regular organizer of social trail runs in town (including the Winter Solstice Run on the Rivanna Trail the first day of winter each year) and is an active member of the Charlottesville Area Trail Runners Club and the Virginia Happy Trail Runners Club.

Conte and Gill have racked up impressive trail-running performances over the years, currently coach other runners, host a weekly fitness radio show and volunteer for trail-protection foundations. In 2001, they began directing trail-running events and founded Bad to the Bone Endurance Sports.

Says Gill, “The proximity to the Blue Ridge Mountains, combined with the Charlottesville City trail system, make for a varied trail-running experience.”

On September 24, 2011, Gill and Conte plan to show off their “playground” at the first annual Trail Runner Ultra Race of Champions (UROC), when many of the best ultra trail runners join trail runners of all levels to compete in a 100K showdown.

Q&A with Conte and Gill

How has trail running been integrated into Charlottesville daily life and how has this helped the community?

Conte: The [Charlottesville] trail-running community not only runs on trails, but actively builds and maintains them.

Gill: We founded the Charlottesville Trail Running Club, a group that not only organizes trail-running events but works to build and maintain trails, and started the Great Eastern Trail Series. Both brought more awareness to local trails. And people came into Charlottesville Running Company to learn about trail running here.

What has been your primary involvement and work within the Rivanna Trail Foundation?

Conte: I have been part of the [Rivanna Trail Foundation] Board for four years and lead trail-work parties and help organize major events, such as National Trails Day. My motivation is purely selfish—trails are one of the things I use and love the most.

What sets UROC apart from other trail races in the country?

Conte: The mission to bring together the best athletes is something common in other sports, but not in ultrarunning, and we feel this is way overdue. Ultrarunning is a growing sport and we created UROC to help propel it into a new era—bringing in more races and resources for elite athletes.

Bel Monte Endurance Runs 50M, 50K, 25K, March 26, 2011, Sherando Lake Recreation Area and the George Washington National Forest. This rugged, mountainous race is on mostly technical single- and doubletrack trails, with some gravel roads. On race day, it could be snowing or a pleasant early spring temperature. In the 50-miler, 11,009 feet of elevation gain is spread over three long climbs. www.badtothebone.biz

Trail Runner Ultra Race of Champions 100K (UROC) and Great Eastern Endurance Run 50K and Half Marathon, September 24, 2011, Wintergreen Resort, Blue Ridge Mountains and George Washington National Forest. In UROC’s 100K, climb nearly 13,000 feet and compete against some of the biggest names in ultra trail running over ribbons of technical, mountain singletrack, gravel roads and a few fast miles on the Blue Ridge Parkway. Not up for 62 miles? The 50K and Half Marathon share portions of the same course. UROC offers a cash purse to the top-five male and female finishers, as well as additional incentives to elite runners who toe the line. www.badtothebone.biz

Winter Solstice Run, 18-plus-mile trail loop on the third Saturday each December. Circumnavigate Charlottesville on the singletrack Rivanna Trail. There is no official registration or event fee. Look for details from run organizer, Sophie Speidel, this fall: http://charlottesvilleareatrailrunners.blogspot.com.

Rivanna Trail. Loop the entire town of Charlottesville along this woodland, 18-plus-mile halo, accessible from multiple trailheads around town. Bring extra water and tack on seven bonus miles with a hilly circuit on Observatory Hill (O-Hill). The Rivanna Trail has many spurs, and a recommended three-mile off-shoot is the River North Trail that begins at Penn Park on the northwest section of town and parallels the Rivanna River through grassy meadows, with no nearby homes and lots of wildlife including bald eagles, deer, coyotes, river otters, turkeys, red and grey foxes and—on rare occasions—black bears. Download free trail maps at www.rivanna.avenue.org.

Monticello. A 7.5-mile network of steep, woodland and natural grassland trails weaves up to Thomas Jefferson’s Monticello, the third President of the United States of America’s mansion in the sky, located on the southern edge of town. Download free trail maps at www.monticello.org.

Walnut Creek Park. Fifteen minutes south of town, accessible off Route 29, this state park has 15 hilly miles of forested singletrack and a swimming lake for cooling off after hot summer runs. Trails here were built and are maintained by mountain bikers so be prepared to share space.

Shenandoah Mountain Trail. On the west side of the Shenandoah Mountains in the Ramsey’s Draft Wilderness Area. 12- to 14-miles roundtrip, it is mostly a narrow, dry, grassy ridge and has less snow in the winter than other trails in the area. It is rain shadowed in the summer, has no stream crossings and reaches an elevation of nearly 3400 feet. On a clear day, you can see 50 miles into the mountains of West Virginia.

When Do I Need New Trail-Running Shoes?