The United States of America is a trail runner’s paradise. From coast to coast, the land exhibits an array of ecosystems and wonders. There are wild places, and trail systems that travel through them that provide access to soul-nourishing experiences for runners and hikers alike.

These places in the landscape inspire runners. Trail junkies are drawn to the raw exposure of the elements, the challenge of terrain untainted by cement and asphalt. Views untainted by buildings. Soundscapes untainted by horns or traffic.

If not for the many land policies that have been put into place over the course of our nation’s history, many of these places would be lost to shopping malls and subdivisions.

This year, Trail Runner wants to pay homage to the National Trails System Act and the Wild and Scenic Rivers Act specifically, in celebration of the the 50th anniversary of their creation in 1968. Check out the 50th Anniversary website for more information or celebrate at one of the events held this year.

The National Trails System Act authorized a national system of trails that established the Appalachian and Pacific Crest Trails, providing outdoor recreation opportunities throughout the country. The system has since grown significantly to include 11 National Scenic Trails and 19 National Historic Trails covering over 55,000 miles through 49 States.

The A.T. roughly mirrors Virginia’s long northwest border, starting in the heftier mountains in Jefferson and George Washington National Forests in the southeast and winding its way up towards Shenandoah. Virginia’s extended diagonal width means it contains 554 miles of the A.T., more than any other state. In other words, there’s a lot to explore. Here’s just a taste of what the oldest trail in the country has to offer in Virginia, starting with shorter jaunts and moving to more extended mountain adventures.

The run to Rice Fields Shelter is a perfect half-day adventure located just outside of Pearisburg in southwest Virginia. Runners climb 1200ft in 2.3 miles through a series of wooded switchbacks, scramble a set of wooden stairs over a barbed wire fence (nothing says southwest Virginia like barbed wire,) and emerge on a grassy open ridge line.

A 360 view is a matter of course for a Rocky Mountain trail runner, but in the Appalachians “open ridge line” is usually an oxymoron, and Rice Fields is regularly maintained in order to retain this sweeping vista. Run the remaining 0.2 miles along the ridge for a view of rolling blue ridges and pastures down below and a 5 mile round trip, or continue for another mile of intermittent views and gradual terrain.

For a longer day, consider the 35 mile Catawaba Runaround near Roanoke, Virginia. The loop is affectionately known by Virginian hikers as the Triple Crown for the its three well-known high points: Dragon’s Tooth, Tinker Cliff and McAfee’s Knob. The full route boasts a rocky but runnable 7,870 feet of elevation gain on some calf-killing switchbacks, with rewarding treks through shady deciduous forests and across private southwest Virginian farms in-between climbs.

Relatively moderate Virginia snowfall keeps this route passable for the stir-crazy all year long. Each peak can also be run on its own for a shorter route to some spectacular views of the mountains (Dragon’s Tooth is 5.7 miles, Tinker Cliffs 7.7 and McAfee’s Knob 8.3).

Tinker Cliffs and McAfee’s Knob are only a few miles apart, and the run between the two tracks a rocky outcropping with extended views of the Catawaba Valley, ending with a 270 degree panorama view. Dragon’s Tooth, an aptly named limestone rock formation jutting from the mountainside 10 miles farther on, offers near 360-degree views and a great spot for victorious snacking. 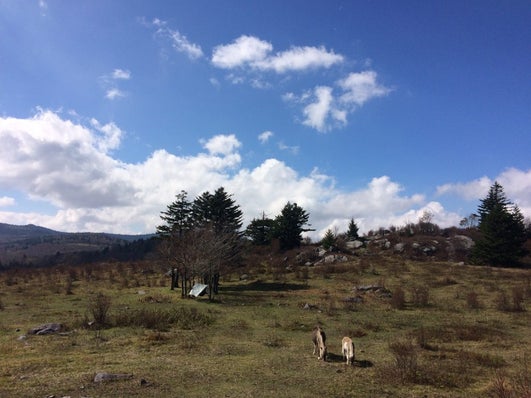 Graysons Highlands State Park contains one of Virginia’s only highlands, and is famous for the views its British-Isle-like mountain top fields provide. Beautiful early morning fog and wild ponies add to the uniquely magical feel of the place. While only about five miles of the Appalachian Trail runs through the small park, those miles are chock full of wildlife, voluntary rock scramble opportunities and gorgeous views—and more miles can be built in on the surrounding trails.

The Grayson Highlands 50K, which weaves in and out of the highlands and the rolling woods that surround it, is so popular it sold out in 45 minutes this year. But there’s no rule saying you can’t run the course year-round for free!

Shenandoah National Park contains 101 miles of the Appalachian Trail and features some of the most beautiful green space in Virginia. This section is a favorite for many through-hikers (including Bill Bryson, author of A Walk in the Woods) due to its stunning views and (relatively) gentle elevation change.

Old Rag Mountain, although not on the A.T.,  is also within Shenandoah and is the most popular hike in Virginia—for good reason. The trail forms a nine-mile loop beginning with several miles of steep switch backs (2,415 ft of climbing), before rewarding you with a mile of rock scrambling and continuous views of the rolling Shenandoah mountains. Go early to avoid the crowds and spend some time leaping about on a boulder field big and crazy enough to be the perfect trail-runner playground.

From Charlottesville, Virginia, runners can access several short (2-5 mile) hikes like Humpback Rocks and Spy Rock, that offer quick, steep climbs and great sunrise views at the end. Closer to Northern Virginia, runners can hop on the A.T. in the numerous places it intersects Skyline Drive or the Blue Ridge Parkway, both stunning drives in their own right. These overlooked sections of trail offer their own sort of magic—and that goes for the whole trail, not just Shenandoah.

The A.T. is also known as the green tunnel, because unlike out west, runners and hikers can enter the open maw of green and hike for hours without a view. There’s something unique about that, something that requires patience. A random section of the A.T. will reveal surprises guidebooks can’t be bothered to predict: valleys of ferns, rhododendron tunnels so thick they can only be exited with a machete (or through the runner’s favorite route: forward) miniature waterfalls, forests that embrace autumn with a vibrant enthusiasm and yes, the occasional view of the sea of rolling Appalachians from a rocky vantage point.

Certainly, take in the high points, they’re famous for a reason. Just don’t forget that in 554 miles of trail, there are also bound to be some quietly overlooked sections begging for rediscovery.

Why Being Outdoors Makes Us Want to Help Strangers