The Mount Mitchell Challenge features winter conditions, 4,324 feet of climbing and the tallest mountain east of the Mississippi 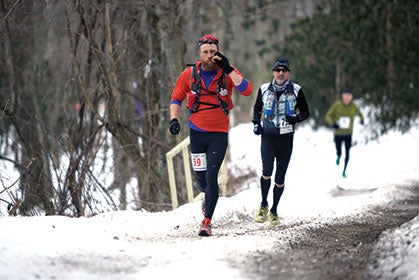 “Marathoners” and “Challengers” (or 40-milers) on the same snow-packed trail. Photos by Colby Rabon.

Knee-deep snow might not be your first image of North Carolina, but Jay Curwen encountered just that as the front-runner and eventual winner of the state’s inaugural 40-mile Mount Mitchell Challenge in 2000.

“I had to break trail and posthole to my knees for several miles,” says Curwen, who became the race director in 2004. “We have had snow and ice on the course every year. Some years it is feet deep.”

Held the last weekend in February, the Mount Mitchell Challenge consists of technical trails that wind from the town of Black Mountain to the 6,684-foot summit of Mount Mitchell and back. In addition to the 40-miler, the Black Mountain Marathon takes place on the same day, following the same route without the final ascent to the summit.

For many runners, it’s a combination of the races’ hometown feel and the fickle conditions on Mount Mitchell that brings them back year after year.

“I really enjoyed the community gathering at the end of the course,” says Krissy Moehl, 37, of Boulder, Colorado, who won the Challenge in 2010. “It makes for a very welcoming event.”

That includes embroidered finishers’ fleeces, swag bags, well-stocked aid stations and an awards dinner. “We put a lot of effort into ‘ROYP’—return on your pain,” says Curwen.

The mountain itself is not always as welcoming as the local trail-running community.

Despite the rugged conditions on the mountain, the races are as popular as ever.

“We got to the point where we were selling out race spots in seconds every year,” says Curwen. (The fields are capped at 200 for the Challenge and 250 for the Marathon.) “So we instituted a lottery a few years back.”

“The scenery, organization and course are all fantastic,” says Rory Bosio, 31, of Truckee, California, who won the 2012 edition. “It is a difficult race but is surprisingly runnable for the amount of elevation gain.  And the views from Mount Mitchell are well worth the effort to get up there.” 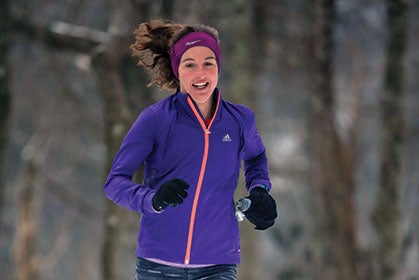 Enjoying the snow and singletrack at the Mount Mitchell Challenge, North Carolina.

The Mount Mitchell Challenge and the Black Mountain Marathon

Register
$125 for the Challenge, $100 for the Marathon; jager66.wix.com/mitchellsplash

Getting there
Fly to Asheville Regional Airport. Black Mountain is a 30-minute drive.

Accommodations
B&Bs abound, but the Monte Vista Hotel (themontevistahotel.net), within walking distance of the starting line, is a favorite.

Post-race grub
In downtown Black Mountain, get your caffeine fix at the Dripolator or indulge at My Father’s Pizza. Pisgah Brewing is the local craft-brew destination.

By the Numbers: The Mount Mitchell Challenge

6,684
The elevation of Mount Mitchell in feet

12
Months of the year that Mount Mitchell has received snow

18.2
The average low in February on top of Mount Mitchell

-34
Lowest recorded temperature on the summit of Mount Mitchell