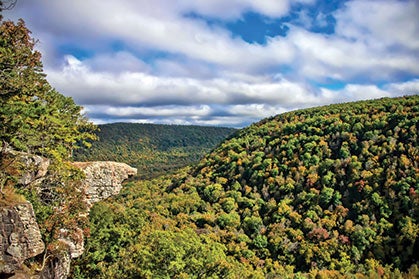 In 1996, when Dale Bailey, a longtime mountain biker, moved to Bella Vista, Arkansas, a golf resort town on the Missouri border, he started looking for trails. All he could find was a lonely, rutted path in an undeveloped corner of town used by motorcycles and all-terrain vehicles.

At the time, the Northwest Arkansas Corridor, a cluster of towns in the Ozark Highlands that includes Fayetteville, Bentonville, Rogers and Springdale and extends as far north as Bella Vista, offered few options to trail runners and other recreational trail users. But over the past 20 years, these towns have blossomed into a trail-running hub on par with the more established trail communities in the central part of the state, around Little Rock.

Bentonville, a quaint but growing town best known for housing mega-retailer Wal-Mart’s corporate headquarters, boasts about 35 miles of singletrack, including the Slaughter Pen system, a canopied forest where smooth, flat trails give way to zigzagging ascents on rocky red clay. More than eight miles of trail wind through sloping hillsides and past rock formations in Mount Kessler, a recently opened park near the University of Arkansas campus in Fayetteville. Twelve new miles of trail weave in and out of the forest around Lake Lincoln, west of Fayetteville, offering views of the lake and possible sightings of the bald eagles that winter there. And at Hobbs State Park-Conservation Area, just east of the major urban corridor, more than 40 miles of multi-use trails run under dense hardwood canopies, along ridge tops and through groves of dogwoods that light up with pink blossoms in the spring.

Many of these trails were in the early stages of being built when Bailey moved from Bella Vista to Bentonville in 2001. The booming area economy, spurred by companies like trucking firm J.B. Hunt, protein producer Tyson and Wal-Mart, was swelling the local population, and many of those new residents sought recreational trails like those in the places they’d moved from. These new transplants—especially mountain bikers like Bailey—worked to expand the area’s sparse trail offerings.

As recently as 2007, when the first phase of Bentonville’s Slaughter Pen system opened, the number of trail users was still small, Bailey says. But as more trails came online, first mountain biking, then trail running, took off. 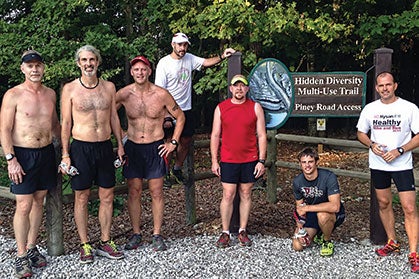 Area runners gather at the trailhead. Photo by Jeff Genova

Every Sunday, Mike Rush, 38, meets a group of dedicated trail runners he calls the Goat Club at the running store he owns in Bentonville and leads them into Hobbs State Park or Blowing Springs for trail (and off-trail) adventures. With several locations spread across Northwest Arkansas, Rush’s store, Rush Running, serves as a hub for the area’s trail community. The club takes its title from Rush’s nickname: his friends call him a “mountain goat” for his ability to climb hills. Rush’s texts to friends asking them to join a run became “goat calls,” and his running companions became the Goats. (Some club members earn more specific nicknames; Rush’s friend and colleague Jeff Genova, the club’s best bushwacker, goes by “Dozer Goat.”)

As the running community has grown, so too has Northwest Arkansas’s trail-racing scene, with several new events in the last few years. Two years ago, Springdale resident Kimberlee Guin launched Outback in the Ozarks with her husband, Todd. The race, a 200-mile relay, kicks off near Eureka Springs, an old-world-style village near the Missouri border, and winds through miles of woods in Hobbs and other parts of the Arkansas Ozarks before ending among preserved Civil War-era buildings and wood fences at the Prairie Grove Battlefield State Park, west of Fayetteville.

Guin says the community at large has been supportive of the trail-racing trend. Outback in the Ozarks, which passes through private farmlands, was welcomed by landowners. During the race, the county sheriff personally patrols Arkansas Highway 16 for drunk drivers to protect the racers crossing the busy two-lane road late at night. And Hooshang Nazarali, proprietor of Crosses Cafe and Grocery on Arkansas 16, stays open all night, serving his signature “Hooshburgers” to the tired, hungry runners stumbling into the tiny town of Crosses. 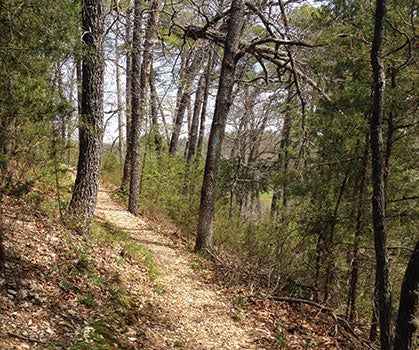 It should surprise no one that such a tight-knit running community would give back to the trail systems it depends on. Outback in the Ozarks donates some of its earnings to the five state parks it passes through. (The parks, in turn, open their shower facilities to runners.) Other events, such as the Tail Twister Trail Runs at Hobbs State Park and the Mount Kessler Run in Fayetteville, put a portion of the funds they raise to maintaining the trails the races take place on. Meanwhile, the Northwest Arkansas Council, a regional entity that seeks to promote the area to prospective businesses and residents, has developed a comprehensive online resource of all area trails, with a smartphone app on the way.

Rush has covered every inch of trail in this corner of the state, but his favorite spot is on the Blowing Springs Trail in Bella Vista, which takes runners over a high bluff overlooking sandstone-dotted terrain. He usually runs from west to east, with the setting sun behind him illuminating the tall cedar trees.

Like views in the Rockies, the vista from atop the bluff always stops Rush, who’s been up several 14,000-foot peaks, mid-run.

“When you get out there, you think you’re in Colorado,” he says.

Getting there Fly into Northwest Arkansas Regional Airport, southwest of Bentonville.

Accommodations The downtown Bentonville location of boutique art space-cum-hotel 21c Museum Hotel is located on the town’s paved trail system. The Chancellor Hotel, in downtown Fayetteville, is a block north of the town square.

Running stores With locations in Bentonville, Fayetteville and Rogers, Rush Running serves as
the headquarters of the local running community.

Where to eat The Hive, located inside the 21c Museum Hotel in Bentonville, offers a modern take on southern cuisine. For more casual fare, Hugo’s in Fayetteville serves up some of the best burgers around. The Apple Blossom Brewing Company, a trailhead-adjacent brewpub and restaurant on Lake Fayetteville, is a great choice after running the seven-mile singletrack loop around the lake.

What to do Catch an Arkansas Razorbacks football game during the fall, stroll through the Crystal Bridges Museum of American Art in Bentonville or head north to Eureka Springs, a 19th-century village converted into an artists’ community and tourist destination.