This article originally appeared in our September 2006 issue. 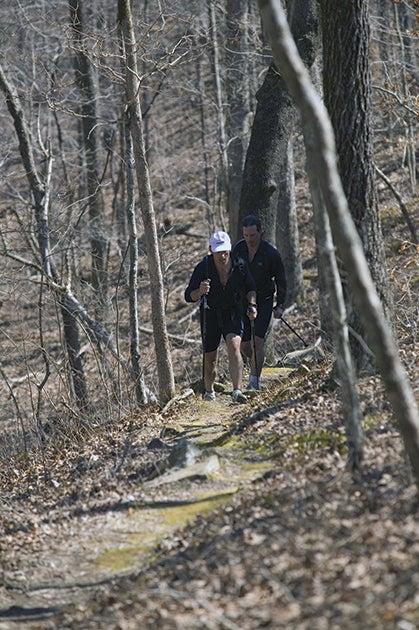 Steve Krik and Greg Eason traeding through hardwoods on the Ouachita Trail.

In mid-December 2005 two trail runners completed a 223-mile non-stop trek through Arkansas’ Ouachita National Recreation Trail. In completing their mega run, Steve Kirk, a 45-year-old engineering project manager, and Greg Eason, a 35-year-old physical therapist, both from Little Rock, Arkansas, slept less than two hours during more than three days on their feet. Though sleep deprived and foot sore (but blister free), Kirk and Eason sport perma grins. “We just ran 220 or so miles, and at the end of the trail, there were all these people smiling, laughing, looking at us like we were crazy and telling us either how good—or bad—we looked,” says Eason. “I can still walk and talk so I feel content.” 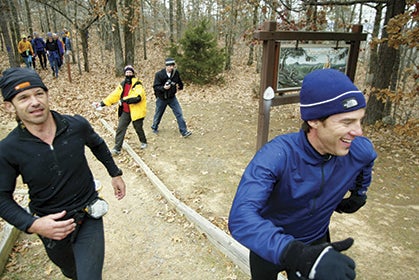 The duo completed their run in a record time of 76 hours 34 minutes (average pace of 20:36 per mile). The trek, commonly referred to as the “OT,” spans two states, from Talimena, Oklahoma, to Little Rock, Arkansas, and encompasses rolling mountains and a rocky trail lined with hickory, maple and pine. Bill Laster of Bailey, Colorado, set the previous record of 5 days 2 hours 23 minutes in 1991. That same year, local runners Lou Peyton and Jim Schuler ran the route in 5 days 8 hours 7 minutes. Both Laster and Peyton and Schuler ran by day and slept by night.

Years later, Peyton, 61, would find herself again facing the OT, this time as part of Kirk and Eason’s support team. “I am still amazed how they could go for days without sleep,” she says.

Eason and Kirk have a gift for endurance running and also hold the record for the quickest completion of the 165-mile Ozark Highlands Trail, which they completed in 64 hours 34 minutes two years ago. That mountainous and scenic route begins at Lake Fort Smith State Park, traverses the Ozark National Forest, and ends at Woolum Landing near the Buffalo River, the first national river in the U.S.

“After that adventure, it just seemed logical to run the other major trail system in the state in the same way,” says Eason. “We had to be prepared for all weather conditions—Arkansas’ December temps can be in the 70s or 20s with snow or rain. But the important aspect of the planning was mental. We went into the run confident we could accomplish our goal—which was just to finish—and with no contingency plan.”

The duo worked on the trip logistics for over a year. “We had many things to work out, including crews, pacers, aid stations, food and gear,” says Kirk.

At 5:05 a.m. on December 14, 2005, the two hit the trail at Talimena State Park. Despite a drenched course due to rain the night before, Eason and Kirk were able to navigate the rocky and hilly route injury free.  “The most difficult section of the trail for me was from mile 124 to 160. There were several big climbs, and sleep deprivation was taking a toll,” says Kirk. “Taking a 30 minute nap got the sleep monster off my back.”

Along the way, crew provided the necessary nutrients, which varied from everything from Ensure to pizza to gummy bears, and tallied an estimated 40,000 calories. “Each supported stop was a little different, but basically the crew would have chairs out so we could sit down,” says Eason. “One of their primary jobs was to get us in and out of the support areas as quickly as possible. Real food like Big Macs and Taco Bell bean burritos worked best for me with Ensure as a supplement. I also drank Red Bulls to help clear the mental fog later in the run.”

“For me, the food that always works best is gels—I ate dozens over the run,” adds Kirk. “The food that tasted the best though was the pizza at mile 190.”

During the night, the two ran by the light of the moon, headlamps and LED flashlights. “The last night really stands out,” says Eason. “The terrain wasn’t that difficult but I was so fatigued. Jenny Foster was pacing me and I kept trying to talk to her, but I wasn’t making sense and I knew she thought I had lost it. She did an exceptional job keeping me on track.”

“The closer we got to the end the more friends came out to lend us support,” continues Eason. “They would just smile and crack a joke or offer some words of encouragement and then start running with us. One friend ran out and met us with a sack of Shipley’s donuts, one of my absolute favorite pre-run foods. By the time we finished there were close to 30 people with us.”

Regardless of the meticulous preparations for the trek, both physical and logistical, it was the grit of the two runners that ultimately brought them the record. “Feats like this mean that our bodies can really do so much more than we ever thought,” says Peyton. “We can endure, survive and encourage others to reach higher.”

The Joys of Small Local Races