On the Sheltowee Trail, two trail-blazers find themselves in the same woods, 239 years apart 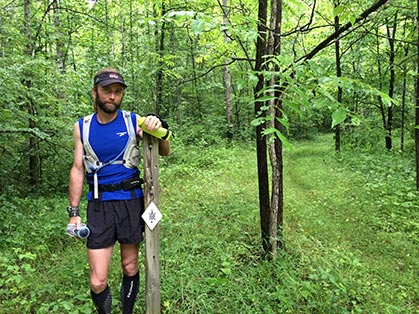 In 1775, Daniel Boone cut the Wilderness Road through the dark, lush hollers and rugged mountains of the Cumberland Gap, marking the first route west for Europeans settling in modern-day Kentucky. In late June 2014, Matt Hoyes, a high school art teacher, ran for eight days straight through the woods where Boone served as soldier, fur trapper and hunter, setting the FKT for the Sheltowee Trace Trail (STT).

The STT is a little-known 307-mile multi-use path that snakes through the thick woods of the Daniel Boone National Forest in the western foothills of the Appalachian Mountains. It was built 35 years ago by the U.S. Forest Service and spans nearly the entire length of Kentucky, nipping 20 miles across the border into Tennessee. The trail twists through the rich deciduous forest of the eastern United States, swinging by Cumberland Falls and the monolithic Gobbler’s Arch.

Hoyes discovered the trail during his college days in Cincinnati when he and his pals would journey south to explore mountain biking territory near the Red River Gorge. He attended school on a cycling scholarship and would later be awarded a $500 grant to ride the sections of the STT open to mountain bikes. The love affair spiraled from there.

When Hoyes landed the job teaching ceramics and photography at Thomas Nelson High School in Bardstown, Kentucky, he also began coaching the cross-country team and running more himself. He returned to the Daniel Boone National Forest in 2013 to attempt an FKT thru-run of the STT. The time to beat was two weeks, the fastest known traverse by foot. But Hoyes’s attempt ended in failure after only four days when he felt his pulse throbbing in his toe. It was infected, swollen and turning green.

“I think I was overexerting,” says Hoyes. “I felt bad. I couldn’t keep any food down. It was a real patchy and bad thru-run even for just those four days.”  He threw in the towel, called off the record and limped home.

But the effort wasn’t going to die quietly.

A year later, when his fiancée, Emmy, and her friends began planning her bachelorette party, she jokingly asked Hoyes what he planned to do for his bachelor celebration: “Go out and run through the woods?” Hoyes thought that might be exactly what he’d do.

It was time for STT record attempt, take two. “Things were harder than they needed to be [during the first attempt],” says Hoyes. “I felt like I was rushing and still not getting far. I simplified the logistics and became OK with being slow and being out longer if I had to.”

He recruited a smaller support team this time—including his brother (and best man) and wife-to-be—packed a single duffel bag of gear to be carried in the support vehicle, and stepped south from the northern terminus on June 25. Eight days and ten hours later he emerged on the other side, at the Leatherwood Trailhead in the Big South Fork National Park, Tennessee.

The trail didn’t make the journey easy. He slogged through stagnant water and horse poop, crossed sunken boardwalks, fought through dense brush and navigated rock overhangs. “Some segments will strip away everyone’s ability to run fast,” says Hoyes. “You have to be OK with overgrowth and missing blazes and getting bitten by bugs.”

But those challenges are why, according to Hoyes, it was worth it. The trail that sometimes cuts through mud and prolific vegetation leads to rivers and waterfalls, 200-foot sandstone cliffs, overlooks and expansive rock arches. It can be painful, but it leads to beauty. Rich Appalachian beauty.

“Most of the trail is routed along ridgelines in the northern part of the Daniel Boone National Forest,” says Steve Barbour, Executive Director of the Sheltowee Trace Association. With high points reaching 1,500 feet, the rises in the trail only amount to 500 to 600 feet, which, Barbour admits, is not significant compared to other regions of the country. But few other long trails pack in such a diverse landscape in such a short distance. Ridges fall away to the Cumberland and Big South Fork Rivers, broad valleys and dark cliff-side caves. “You get a little of everything in those 307 miles,” says Barbour.

The name Sheltowee, meaning big turtle, was given to Daniel Boone by Shawnee Native Americans. The blazes which mark the trail’s meandering journey from Kentucky to Tennessee are dark turtles set on a white diamond background. The ethereal ghost of Boone leads pilgrims like Hoyes through the mountains still to this day.

“Boone roamed all around the Cumberland plateau,” says Barbour. “Boone culture is evident all over Kentucky. People are proud he helped settle our state.” And who could ask for a better guide, especially on a trail where it’s possible to run or walk for days without seeing another soul?

“I mostly only encountered other trail users in the ‘parky’ areas such as Natural Bridge and Red River Gorge, Cumberland Falls, and Laurel Lake,” says Hoyes. “Most days I didn’t see anyone else on the trails at all.” The STT is such an underutilized resource that many locals are unaware of its location or length.

Hoyes says that he considers his FKT record (an average of about 38 miles a day) to be relatively soft. He’s certain others will come along and break it by hours and even days, and he’s okay with that. His main goal was to draw attention to the underutilized STT and the beauty of the Daniel Boone National Forest. “I want people to know the trail exists. I want people to get out and utilize it,” says Hoyes. “You don’t have to run. Just make it a destination.” 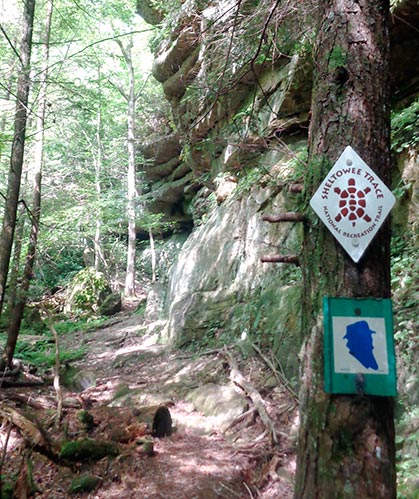 For more information about rules and regulations for the Daniel Boone National Forest and Sheltowee Trace Trail, visit: