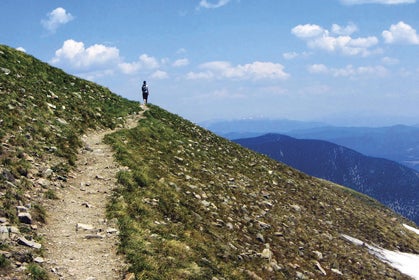 “Pee on a rock upwind from them.”

Huh? My husband and I looked skeptically at the hiker.

“It’s like crack,” he exclaimed as he stepped around us and continued on his way down the trail. “They love the salt.”

And so, armed with this new information about the nutritional habits of bighorn sheep, we continued up Frazer Mountain en route to Wheeler Peak, where a small herd was—apparently—enjoying a sodium deposit left by the hiker.

“That’s definitely incentive to drink more water,” I told my husband, taking a long sip from my Camelbak and looking forward to a close-up encounter with Ovis canadensis nelsoni.

At that point, we were about 3.5 miles into an adventure through northern New Mexico’s Wheeler Peak Wilderness—19,661 acres of high country in the Carson National Forest near Taos Ski Valley. Named after Army Major George M. Wheeler, who surveyed New Mexico in the 1870s, the area contains several of the state’s highest mountains, including our destination, Wheeler Peak, which is the tallest at 13,161 feet.

Our journey began around 11:30 that morning—admittedly a late start for a 13.5-mile trek, but the skies were clear and we figured the eight to 10 hours suggested by our guidebook for this excursion were intended for a more pokey audience. We departed from the upper parking lot at Taos Ski Area, which sits at 9430 feet in the Sangre de Cristo Mountains. Because we live only 90 miles away in Los Alamos, we were accustomed to the altitude. What took us by surprise, however, was the amount of water and vegetation we encountered. As we headed up the Bull-of-the-Woods Trail, a mountain stream cascaded toward the valley below, and the dense evergreens were a refreshing change from Los Alamos’ wildfire-scarred landscape. Wildflowers and thick mosses lined the old logging road on which we ran.

At Bull-of-the-Woods Pasture, we turned right onto Wheeler Peak Trail 90, which offered spectacular views of Red River, the sleepy mining-turned-ski town where we’d spent the previous night. Above treeline—about where we encountered the Sheep Whisperer—abundant wildflowers, pockets of snow and long rockslides covered otherwise grassy alpine meadows. Marmots scurried frantically between burrows, and we spotted four bighorn sheep on the ridgeline as we climbed out of La Cal Basin. Unfortunately, we never got close enough to see if the urinating-on-rocks theory really works.

At about mile 7.6, we summited Mount Walter (13,141 feet), named for H.D. Walter, a Santa Fe-based mountaineer and photographer “who loved these mountains,” according to a sign at the top. Lost Lake and Horseshoe Lake glistened below us to the east; above it, Taos Cone, Red Dome and Old Mike Peak towered in the distance, their sheer northern faces glistening in the afternoon sun.

From Walter, we followed an exposed ridgeline for about a quarter mile to the top of Wheeler. En route, we passed two large men on their way down from the peak. I asked one to take a photo of us. It was only after I’d handed over my camera that I saw the duo was armed with pistols and knives in their belts. I smiled my friendliest smile, and as we parted ways they warned us not to be careless with our food at the top. “The marmots are aggressive,” they warned. (Hence the weapons?)

The top of Wheeler is rocky with short alpine grass. A makeshift rock wall sits in a horseshoe on the summit—a wind break for weary hikers. Fortunately, the wind died as we approached, and we sat, exposed on the summit, soaking up the warm June sun. I tore open a Luna bar wrapper and began to hear rustling from every direction. Sure enough, marmots popped up everywhere in hopes of being tossed a treat.

We decided to descend the west side of the mountain via the Wheeler Peak Summit Trail #67, making our excursion a loop instead of an out-and-back. We knocked out about 2000 feet in 2.2 miles, scurrying down steep talus, patches of snow and breezing by the mountaintop militia men, who were moving at a snail’s pace over the torturous scree fields.

Below treeline again, we followed blue dots on spruce trunks until the trail split, where we opted to take a short detour to Williams Lake, an alpine lake that sits at 11,040 feet with Wheeler towering 2000 feet to the east. The last 3.5-mile stretch of Trail 62 descends through thick forest and avalanche debris to the ski area; the final 1.6 miles follows Rubezahl, a beginner’s run that parallels gorgeous mountain homes and a gurgling mountain stream.

A short drive later, we were seated on the patio at Taos Pizza Outback, a quirky pizzeria on Paseo del Pueblo Norte, near the heart of town. I drank housemade sangria and dug into a thick-crusted pizza piled high with organic bell peppers, tomatoes, jalapeños and, of course, green chiles.

White butcher’s paper covered the table, and, as we finished our drinks, I sketched various scenes from the day’s adventures, including the yurt we’d slept in the previous night at the Enchanted Forest Cross-Country Ski and Snowshoe Area in nearby Red River, New Mexico. Owned by Ellen and Geoff Goins, EFXC is home to the New Mexico State Snowshoe Championships, which I’d raced previously. When Ellen invited us to the yurt, we gladly accepted, knowing we’d have unlimited access to her property’s gorgeous trails, comfortable bunks and a tasty breakfast in town the next morning.

Because we’d hiked to the yurt at night, we didn’t take in any more scenery than our headlamps would allow. When I awoke the following morning, I stepped outside to a panoramic view of—you guessed it—Wheeler Peak. I pointed to the summit and declared: “I’ll see you this afternoon!”

June to October, snow conditions permitting. Be wary of afternoon storms and lightning above treeline.

From the center of Taos, continue east on NM 68; at the junction with NM 150, turn right toward Taos Ski Valley. The road dead ends at Taos Ski Area; park in the upper lot and look for the Wheeler Peak Wilderness sign.

Here are a few of our favorites:

2. The South Boundary Trail, which links Taos and Angel Fire, offers 20-plus miles of smooth trail through conifer forests and aspen groves.

3. The moderately technical 5.1-mile Devisadero Trial loop takes you to Devisadero Peak, which was once used by the Taos Pueblo Indians to stand guard against the Apaches.

5. The 5.3-mile Columbine Canyon Trail, near Questa, starts at Columbine Campground and connects with many other trails, such as the Lobo Peak Trail, for endless possibilities for excursions.

6. The 4.1-mile Elliott Barker Trail, just outside of Angel Fire in the Carson National Forest, climbs 1000 feet in one mile and offers great views of the Moreno Valley, Eagle Nest Lake and Wheeler Peak Wilderness.